59 Seconds claims to be the “World’s Fastest Card Game.” Being a fan of the speed card genre I was skeptical as I have played quite a few other games from this genre that have claimed the exact same thing. Despite not being a particular deep genre that suffers from a lack of originality, I have always liked speed card games as there is something satisfying about trying to play your cards faster than the other player. While I am always leery of games from this genre, as they usually end up just being more of the same, I am always willing to try out a new game from the genre. This brought me to today’s game 59 seconds. 59 Seconds is a fun speed card game that suffers from not differentiating itself from the rest of the genre.

How to Play 59 Seconds

Each round begins with the dealer flipping over the timer. The players will then flip over the cards in the two action piles.

Both players play at the same time. Players can play cards from their hand that are either one higher or one lower than the top card in either action pile. Wilds can be played as any number but the player has to declare what number they are playing it as. Whenever a player plays a card they draw the top card from their draw pile. 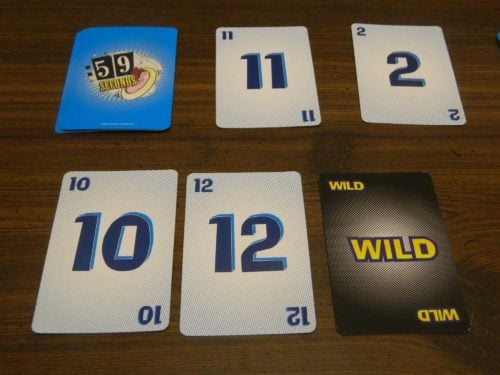 For the action pile on the left players can either play a ten, twelve or a wild card.

The cards that feature both one and fourteen can be played as either a one or a fourteen. The player has to announce which number they are playing it as. A 1/14 card can be played on top of another 1/14 card. 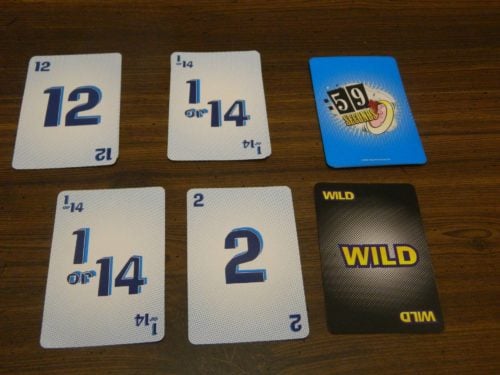 The card on the right action pile was played as a one. A player can either play another 1/14 card, a two card or a wild card.

When neither player is able to play a card to either pile, the top card from each refresh pile (the two outer piles) is placed on top of the action pile that is next to it.

If neither player has earned enough points to win the game, another round is played.

The first person to reach 50 points wins the game.

My Thoughts on 59 Seconds

Having looked at so many different speed games here on Geeky Hobbies, I have to say that after a while they tend to blend together. While I actually like the speed card game genre, the genre is generally not known for being highly original. Basically the genre relies on playing your cards quicker than the other player(s) in order to win. Most speed games make some slight tweaks but for the most part they play quite a bit like one another. As a matter of fact we have played three games that I would say play similarly to 59 Seconds: Dutch Blitz, Perpetual Commotion, and Qwitch. If you have ever played one of these type of speed games before you should already have a pretty good idea of what to expect out of 59 Seconds.

59 Seconds may not be an original game but that does not make it a bad game. Like most speed games I had fun with 59 Seconds. There is just something fun about racing to play your cards before the other players. 59 Seconds is the type of game that you could literally teach to a new player within a minute or two and enjoy immediately. People who hate speed games won’t care for the game but if you like these type of speed card games I think you will have fun with 59 Seconds.

When games advertise that they are the “World’s Fastest” game I generally take the statement with a grain of salt as I have played a lot of games that have claimed the exact same thing. In the case of 59 Seconds though a case could be made that the game is not exaggerating. In 59 Seconds I would say that most rounds only take around one to three minutes. You can’t really ask for a much quicker card game. If you are playing to the 50 points recommended by the game though it will take quite a few rounds to reach those many points which means that games will still take around 15-20 minutes. You could easily adjust the number of points needed to win though or could even just play a certain number of rounds making the game as short or as long as you want.

If I had to break down the reliance on skill versus luck in 59 Seconds I would say that it is 50/50 for the most part. If you are not good at speed games you will have trouble winning a round. While there will be times where you can play a card without having to worry about the other player, you will regularly have to play your card quickly in order to play it before the other player. The slower player will lose most of these face offs which is why they will lose most of the time.

Luck still plays a big role in whether you are going to win a round though. The cards you are dealt are going to determine how well you do in the game. Getting dealt a bunch of cards that are next to one another allows you to quickly play a run of cards which lets you get rid of a lot of your cards. It is also helpful to get cards in the same area as the cards on the top of the action piles. If the cards in your hand work well with the cards on top of the action piles it is much easier to get rid of them. If luck is not on your side though you will get stuck with a lot of cards that are hard to play. There is nothing even the best speed players can do if they aren’t dealt the necessary cards to win a round.

The other thing that leads to players rarely ever getting rid of all of their cards in time is the fact that the other player could purposely stall in order to make sure that the timer runs out. The likelihood that a player can keep playing cards without relying on the other player playing some cards is slim. If a player feels like they are behind and the other player can’t play any cards, there is no reason to rush to play a card. They can just take their time to figure out what they want to do. If you are going to lose the round anyway, why not limit how many points the other player will receive.

This becomes a problem because there likely will be several times each round where there are no cards that you are able to play. This usually occurs when you either have all high or low cards in your hand and the two action piles are the opposite (high/low). You are then forced to sit and wait while the other player plays a bunch of cards unimpeded. Eventually they will get one of the piles to a number where you can play or you will get to take the top card from the refresh piles. Having to sit around waiting for the other player though really hurts the game’s pace.

I think the biggest problem that I had with 59 Seconds though is the fact that all too often rounds end in a stalemate where neither player is able to play their remaining cards. While I could see this being a rare occurrence in this type of game, it happens way too often in 59 Seconds. Within four rounds we encountered two rounds that ended in a stalemate with neither player winning the round. Unless we were just really unlucky, it should not happen this often. This situation would have been a lot worse if the rounds were longer but it is still disappointing having a round where neither player wins. With how often it happens I think the game should have done something to reduce the likelihood of it happening. For example the game could have put more cards in the refresh piles as that would have given the game more chances to reset while also giving the players less cards to get rid of. I personally would recommend adding two or three more cards to each refresh pile.

One thing I don’t really get about 59 Seconds is that the game decided to limit the number of players to only two. This decision doesn’t make a lot of sense to me as these type of speed games are usually better with more players. More players make these type of games more chaotic but in my opinion that adds to the game’s enjoyment. With only two players the game just feels like a back and forth experience as one player ends up waiting for the other player to play a card. 59 Seconds could have easily supported more players as well. The only reason why I wouldn’t recommend playing the game with more than two players is that the game doesn’t really have enough cards to support more players. If you bought a second copy of 59 Seconds though I think it could easily support three or four players.

Just like with the rest of the game, 59 Second’s component quality is pretty average. You get cards and a sand timer. The sand timer is nothing special. The cards are pretty generic as well as they feature a pretty basic design and a number. The cards didn’t really need an elegant design as you spend little time looking at anything other than the number but a little more could have been put into their design.

Should You Buy 59 Seconds?

59 Seconds is the basic definition of a solid but unspectacular speed card game. The game is quick to learn and play with most rounds only taking one to three minutes. It is fun racing against another player to try and get rid of your cards first.  That said 59 Seconds is far from an original game. There have been many other speed card games that play basically the same as 59 Seconds. The game relies on quite a bit of skill but also relies on quite a bit of luck. While I liked the idea of getting more points for finishing quicker, it rarely comes into play as you have to get really lucky in order to finish within a minute. Too many rounds end with neither player being able to get rid of all of their cards and for some reason the game only supports two players.

If you would like to purchase 59 Seconds you can find it online: Amazon