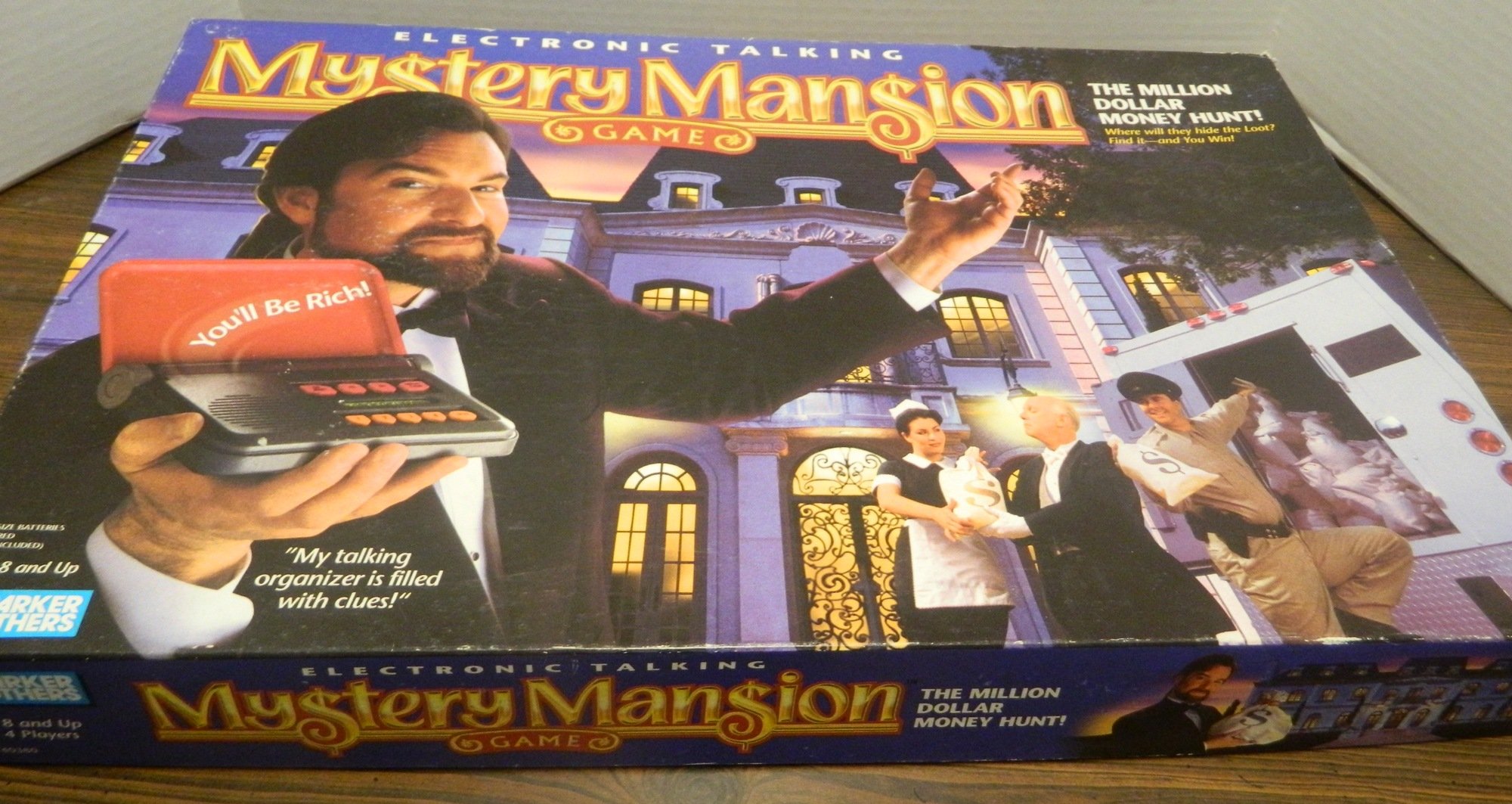 Separate the 10 “clue” cards and shuffle them placing them face down on the table. If you are going to use the “turn” cards sort them by the words on the cards and place them face up on the table. Place all of the furniture to one side of the table. Each player chooses a different colored playing piece and places them in the room inside the front door. Press the on button on the organizer to start the game. Pick a player to go first and play will then continue in a clockwise manner.

Each player gets to perform three actions on their turn. There are three different actions that a player can perform and the  player chooses which actions they want to perform and in what order they want to perform them. A player could do the same action three times, one action twice and one action once, or the player can do each action once. The game has included the turn cards which you can use to indicate which actions you performed on a given turn. The three actions a player can perform are as follows:

The move action allows a player to move to an adjacent room. Each room that a player moves to counts as an action.

The electronic device will then tell the players what was found:

The game continues until someone finds the piece of furniture that the treasure is hidden in and has the appropriate cards to retrieve it. When this is accomplished the electronic unit will declare the current player as the winner of the game.

Being a remake you would assume that the two games would share a lot in common. Both games have a similar premise where players move through a house looking for clues which will guide them to a hidden treasure. In both games players search furniture in order to find clues which will lead them to the treasure.

Despite sharing the same name and a similar premise, the two Mystery Mansions are actually considerably different. The original Mystery Mansion plays more like a typical roll and move game while the newer electronic version plays more like a deduction game. In the original game you played cards to search furniture and hoped to find a treasure chest card. In the newer version you use clues to lead you to the piece of furniture that holds the treasure.

Like its’ predecessor, Electronic Talking Mystery Mansion is a simple game to learn and play. The rules take a couple minutes to read and explain to new players. While Electronic Talking Mystery Mansion is not particularly deep, I had fun playing the game. It is far from a strategic deduction game as I will get to soon but you can have fun with the game if you realize that it is just a casual game where you shouldn’t put too much thought into your moves.

One of the best parts of Electronic Talking Mystery Mansion are the components.

So while Electronic Talking Mystery Mansion is a somewhat fun game with good components, the game has some issues.

I have to make a few comments on the theming of the game. The designers deserve credit for making an effort but at times the theme is just ridiculous. So Mr. B. Emmet Redstone’s an eccentric millionaire that invites people over to his house and gives them clues on where to find his money? Kind of odd but maybe he is a generous man that wants to give away his money. I can’t understand his choices of hiding spots though. Mr. Redstone has some brilliant hiding places including the hot tub, treadmill, telescope, computer, fish tank, and easel. I don’t even know how you could hide money in some of those items. By far the dumbest location though is the fireplace. Either no one ever uses this house or Mr. Redstone’s money will burn up any time the fireplace is used. Add in the fact that you need some random clue and permission of one of his employees to collect the money? You are probably better off not really thinking about the theme of Electronic Talking Mystery Mansion.

While the Electronic Mystery Mansion game seems like a deduction game, it doesn’t really play like one. This is because there are way too few secret clues. Probably at least 75% of the clues are given to all of the players at the same time. None of these clues are that helpful since everyone will know the information which puts all of the players on an even footing. There are so few secret clues that if you end up finding one of the pieces of furniture that have a secret clue you can get a pretty big advantage over the other players.

You can never really gain too big of advantage over the other players because it is really hard to hide that you actually know what piece of furniture has the hidden treasure. This is because all of the players hear when you search a piece of furniture and it asks for two different clue cards. There are only a couple pieces of furniture that ask for two clues in the entire game so if you end up hearing the game asking for a second clue card you have a good idea where the treasure could be hiding.

So this brings me to how Electronic Talking Mystery Mansion usually ends. Basically the game revolves around controlling the clue cards. Whoever can control the most clue cards will likely win the game. Since you need the correct clue cards to eventually get the treasure, whoever controls those cards will likely win the game. This creates a war for the cards at the end of the game where all of the players are fighting for control over the cards. The cards are all of the power in the game.

Now this might not have been such a bad idea if it wasn’t for the fact that control over the cards is solely determined by luck. You can get cards in three different ways.

So there are a couple of ways to get the clue cards but every single one of them relies on luck. You have no idea what furniture will give you clue cards. Unless you are an expert dice roller, determining the outcome based on a die roll will always come down to luck. Since everyone will pretty much figure out where the treasure is hidden at the same time, it becomes a race to whoever has or can get the necessary cards first. This means that the luckiest player will almost always win the game. For example in the game I played one player was able to win almost every “talk” action and this player ended up controlling almost all of the clue cards. It should not come as a surprise that this player ended up winning the game.

The problem is that it could be kind of difficult to create a house rule that would fix these problems. The best option would probably be to allow a player to only attempt to steal one card from each player. You could also implement a rule that you could only steal cards from players that you are in the same room as. Both of these will prevent players from continuing to steal all of the clue cards. The problem is that these rules will probably prolong the game as players will just steal the cards from each other and you will get a never ending loop until someone rolls considerably better than the other players.

Overall I would say that Electronic Talking Mystery Mansion is a pretty average game. The components are really nice and the game has some interesting mechanics. The game is fun if you don’t put too much thought into it. The problem is that there really isn’t much deduction in the game. Since there is so much public information all of the players are probably going to figure out the treasures’ location at the same time. This means it comes down to luck as to who will be lucky enough to get the right clue cards in order to claim the treasure.

I would classify Electronic Talking Mystery Mansion as the type of game that I would play if someone else wanted to play but I don’t really see suggesting to play the game anytime soon. If you have fond memories of the game I think you will still enjoy it. If you are looking for a good deduction game though, Electronic Talking Mystery Mansion is not going to be it. If you can find it for a good price and you don’t mind a lot of luck in games, it may be worth picking up.