To be the first player to leave the mansion with a treasure chest that actually contains treasure.

Place the foyer room face up in the middle of the table with the front door card next to the double doors on the foyer card. Place all of the other room cards face down off to the side. 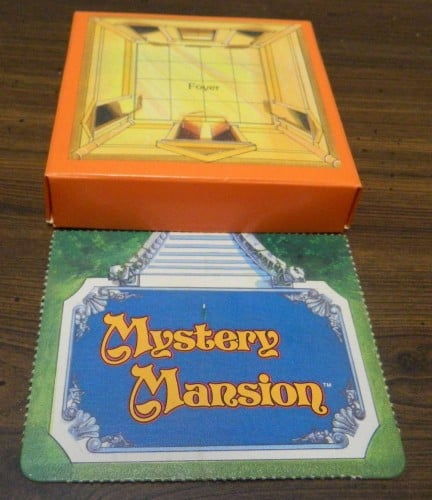 Each player chooses a pawn and places on the front door card. The players choose who will go first.

During each turn the current player will take three actions. The player can choose from the following actions to perform during their turn:

Players must perform three actions on their turn. They may perform the same action multiple times during a turn.

Moving Through and Building the Mansion 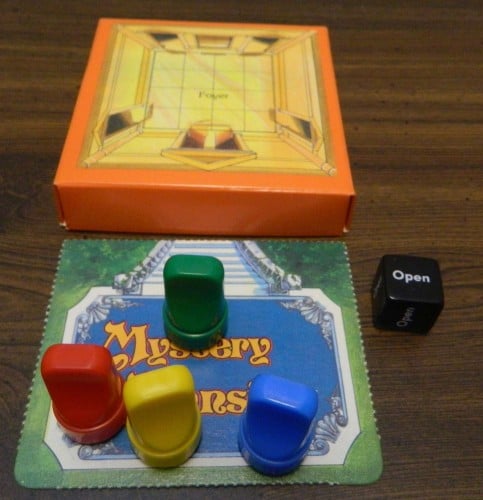 The green player has rolled an open. They would get to move into the mansion.

Players can also choose to move to an unexplored room if they roll “Open”. Players can move through a door that doesn’t have a room attached to it which lets that player add the next room to the mansion. The mansion has three different floors including the basement, first floor, and second floor. Players choose which floor they would like to add and then randomly draw one of the corresponding room cards (basement-flat cards, first floor-shorter boxes, second floor-taller boxes). When adding a new room to the mansion a couple rules must be followed: 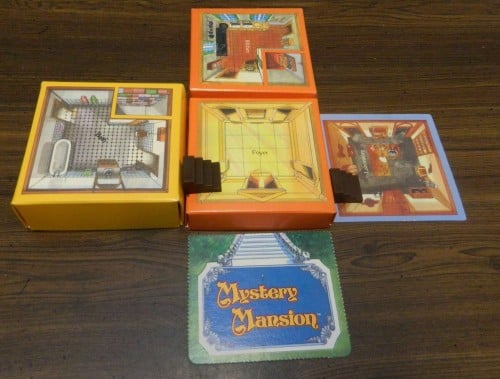 If the room drawn cannot be properly placed, the player draws a new room card and tries to place that room.

If the new room is a level higher or lower than the previous room, the player places a staircase on the lower level room. This staircase is used for the entire room so another staircase doesn’t need to be added to a room that already has a staircase.

After the room has been placed, the current player automatically moves into the new room without requiring another action.

The most common type of cards are search cards. Most of the search cards picture various types of items located around the house. If the player is currently in a room that has one of the items pictured on a search card, that player can play the card to perform a search. The item pictured on the card doesn’t have to look just like the item in the mansion but has to be the same type of item. For example if the card features a chair, any style of chair in the mansion would count. If a player plays a search card in this way the player gets to take the top card from the search deck as well as the top card from the clue deck. 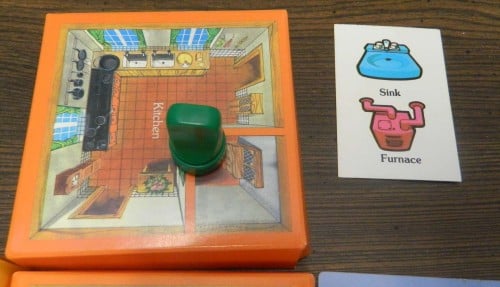 The green player is currently in the kitchen. They play a search card that features a sink. Since the kitchen has a sink in it the player will get to draw a clue card as well as another search card.

During the game players have no limit on how many search cards they can have. Other than cards that picture items there are some special types of search cards. Each time one of these cards are played the player gets to draw another search card.

The following cards are cards that are put into your hand and you need to use an action to play them. 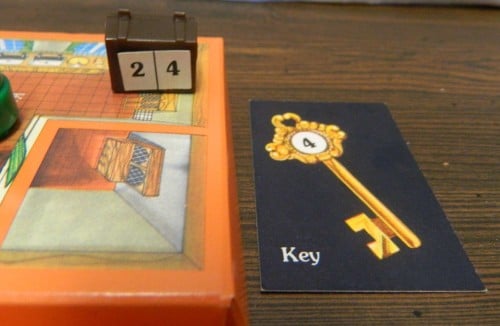 This player owns the four key so they would claim this treasure chest if they go to this room. 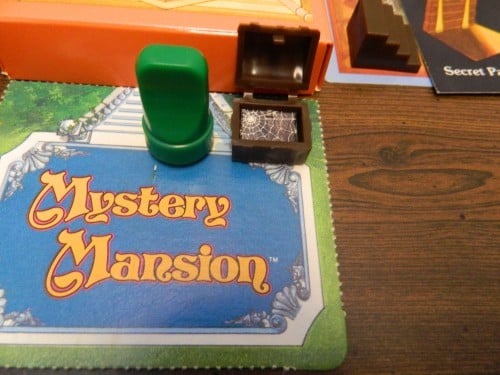 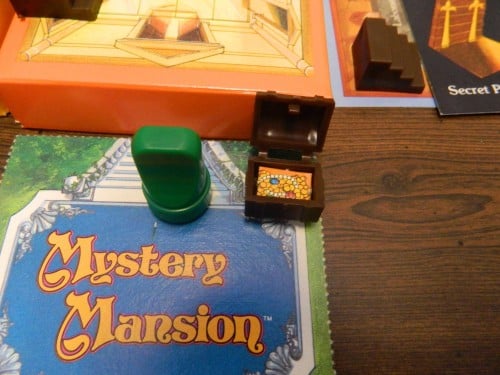 First created in 1984, Mystery Mansion is a board game that I have heard of before but until recently had never been able to play. In Mystery Mansion you play as an adventurer, robber, or greedy relative that is for some reason searching through a mansion to find the hidden treasure. The one unique thing about Mystery Mansion is the fact that you build the mansion while playing so two games shouldn’t play the same. While Mystery Mansion has some interesting mechanics, the game ends up being another average Milton Bradley roll and move game.

Mystery Mansion’s greatest strength is building the mansion itself. As you move through the mansion you add a new room to the mansion whenever you enter a new room. This mechanic means that it is very unlikely that you will ever play the same game twice. While this build as you go mechanic has become pretty popular in board games today, back in the 1980’s it was a pretty novel idea. You have to give a game credit when it tries something new that is actually a clever idea.

The best part about building the mansion is that the rules for building the mansion are quite simple. All you have to do is match doors and walls with the previous room while making sure that the new room only goes up or down one level. I really like the different heights of the levels which make the mansion come to life as you move up and down levels.

Unfortunately outside of the mansion building, Mansion Mystery doesn’t have much else to offer. Mystery Mansion is another completely average Milton Bradley roll and move game. Basically you play cards and roll the die in order to move around the mansion. Mystery Mansion relies heavily on luck since there is little strategy in the game. Players need to just get lucky to get the right cards to find and control the right treasure chests to win the game.

Due to the mansions usually being pretty small, most of the treasures will end up being put in rooms pretty close to the front door. This makes it quite easy for players to take the treasures to the front door. This means that the game could theoretically end very quickly. If everything goes perfectly, a player could win the game in five to ten minutes if a treasure goes out right away, the player gets the corresponding key card, and the treasure chest is one of the chests that have a treasure hidden inside.

The searching mechanics in the game are an interesting concept but don’t really add a lot to the game. Thematically it does and doesn’t make a lot of sense. If you are looking for a hidden treasure you would have to search behind and under various objects in order to find clues to the treasure chests. It doesn’t make much sense thematically when you keep searching in the same area and sometimes find something and sometimes you don’t find anything.

The searching mechanics mostly adds luck to the game. The more search cards you have the better your odds of finding a matching object in any given room. This means that the number of cards that you have in the game can become really important. Since there isn’t a hand size limit you could end up with a lot of search cards which will give some players an advantage in the game. The other problem with the search mechanic is the fact that it is sometimes hard to see whether you could use a particular search card in a given room. Some of the objects in the rooms are really hard to see and tell what they actually are.

The biggest problem with the game though is probably the clue cards. The clue cards are kind of rigged. A lot of the cards are just cobwebs which are worthless cards. The treasure chest cards are also kind of worthless since while they put treasures onto the gameboard, the player that draws the card gets no advantage over the other players. The other clue cards are really powerful though. The steal treasure cards are powerful since they let you steal treasures from other players. The steal a clue card from every player card is the most rigged card though since you could end up getting multiple keys which could let you pick up a bunch of treasure chests.

Overall the components of Mystery Mansion are kind of disappointing. I like the idea behind building your own mansion but the rooms could have been better made. I like that the different levels are different heights. The problem is that the rooms are made of pretty thin cardboard and the items in some of the rooms are really hard to distinguish. The plastic pieces are decent even though the treasure chests tend to not want to stay shut.

Mystery Mansion is a decent game with an interesting mechanic. Building the mansion is fun and a good idea that quite a few games have actually utilized in recent years. Unfortunately outside of building the mansion, Mystery Mansion is a very generic Milton Bradley roll and move game. You just move around the mansion hoping to get lucky enough to find and control one of the treasure chests that has actual treasure inside. Since there is really no strategy or skill in the game, luck is going to determine who ends up winning the game.

Well, I played this game as a kid and LOVED IT! I had to get a copy to play with my kids and they LOVE IT! Games are like life, they are what you make it. If you don't have fun playing this game maybe you need some inner reflection... Sorry that is a bit harsh, but my family really enjoys playing this game and we choose it over hundreds of other games we have in the house.

I can definitely see some people really enjoying Mystery Mansion as it had some interesting ideas for its time. I didn't think Mystery Mansion was a bad game but I felt it was pretty average.

The biggest problem that I had with the game is that it just felt like it relied almost entirely on luck. I don't need a game that has a ton of strategy, but I generally like a game where your fate is determined by more than luck. If the game had a little more strategy I think it could have been a pretty good game. I actually would be really interested to see what could be made if someone took the game and tried to add some new mechanics to the game. The game has some good ideas, but in my opinion it just felt like it was missing something.

Overall I can see a lot of people really enjoying Mystery Mansion. At the same time though there are going to be a lot of people that think the game is a little too simple and relies on too much luck.

Think. Why would one of the players extend the mansion, making the exit further away from one of the rooms? (There is an answer countering the "why bother?" remark made in the review.)

I haven't played Mystery Mansion is over two years so I may be missing something with this comment. The only reason I could see for adding more rooms to the mansion after the first seven or so would be to build a path for yourself back to the entrance. I am guessing that I didn't originally mention this in the review because I believe the mansion we created didn't really have any rooms that didn't have a pretty direct path back to the entrance. I don't see a reason to build rooms further from the entrance as it will likely just make your path to the entrance longer and it would usually be better to visit the rooms closer to the entrance. I guess you could add a room so you can visit a specific type of room quicker but since you draw the rooms randomly there is no guarantee that you will draw the room you want.