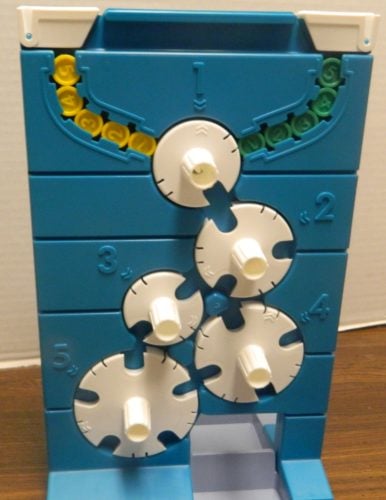 If there are two players each players is in charge of the two colors on one side of the gameboard. If there are four players, players play in pairs and alternate turns.

On a player’s turn they choose one of the wheels to turn. The only rule is that a player cannot turn the wheel that was just turned on the previous turn. The player can turn the wheel as much as they want in either direction. The wheels must be turned slow enough to give the discs (on both sides) time to fall into the wheels. 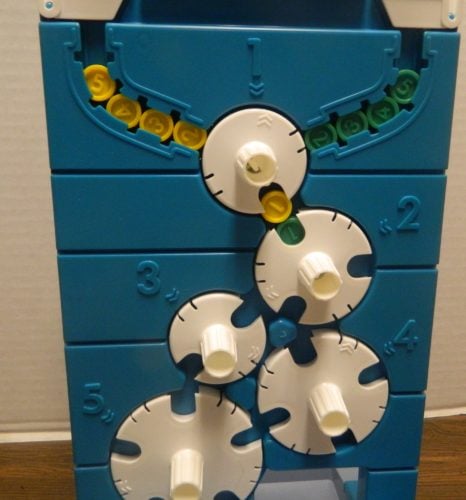 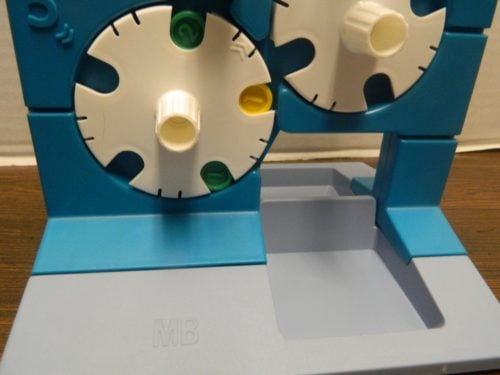 This player will want to turn the last wheel so the green one falls to the bottom followed by the yellow one and the green two.

Downfall can end in one of two different ways. 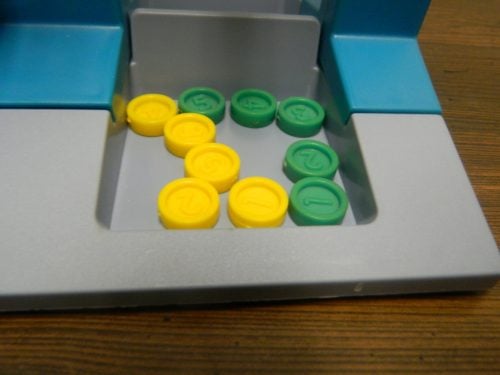 This player/team has gotten all of the discs to the bottom in order and thus have won the game.

What initially drew me to Downfall is the idea behind the game seemed unique and something that I had not seen in other games that I have played. I don’t think I have ever played a game before where you use gears/wheels to move discs from the start to the finish. The game’s premise is probably the game’s greatest strength. The idea of two players/teams playing against one another without knowing anything about the other player’s/team’s gameboard layout is an interesting idea. Any move you make could end up helping your opponent as much as it helps you.

As a whole Downfall is a pretty simple game. The rules take minutes to read and about the same amount of time to explain to new players. The game has a recommended age of 7+. I think children under the age of seven could play the game as they shouldn’t have any trouble understanding the rules. I think the age of 7+ is due to younger children not understanding the strategy behind the game.

Downfall is what I would call a casual game. You can put some thought into the game but it isn’t a brain burner. It is probably best when you just play it and see who ends up winning the game. I had some fun with the game and it would be something I would play occasionally if someone else wanted to play the game. Downfall does have some problems though.

The biggest problem with Downfall is the fact that luck play a big role. Unless both players/teams play a flawless game, the luckier team is going to win the game. Some people will say that the game relies more on memory than luck since if you can remember where all of the other player’s/team’s discs are you can prevent yourself from helping them out. In theory that is true but in reality I don’t think it is that simple. Unless you have an amazing memory you are not going to remember where all of the other player’s discs are. It is not that hard to remember how many discs a player has on every dial (if you can hear the discs falling between the dials) but knowing where they are on each dial is mostly a guessing game.

For your first couple of games it will be impossible to tell where the other player’s discs are on a particular dial. Since both sides are not lined up with one another there is no way to tell where a disc is positioned on the other player’s side of the gameboard. The only way to know where the discs are located is to play the game often enough that you have memorized the differences between the two sides of the gameboard. Even if you have memorized both sides of the gameboard you could still have a hard time remembering all of the locations of the discs. Basically if you don’t play the game frequently enough to memorize the other side of the board, Downfall becomes a guessing game. This is not necessarily a bad thing but it may drive people nuts who want more control over the outcome of the game.

One thing that I think could have added a little more strategy to the game would have been to somehow allow players to be able to move discs through multiple wheels during a turn. The best a player can do on any given turn is move a disc from one wheel through another wheel to a third wheel. While this is a decent amount of movement for a turn, it makes most turns pretty obvious and lacking a lot of strategy. Basically on any given turn you just move one of your discs to the next wheel. This makes the game feel a little repetitive at times.

The one thing the game thinks will add difficulty to the game is the fact that all of the discs have to arrive at the bottom of the gameboard in order or the player/team automatically loses. Before the game began I thought this actually might be a challenge but after playing the game I fail to see how it is much of a challenge. Since all of the discs will enter the gameboard in the correct order, unless you get overly aggressive I don’t see how you could run into problems with the discs getting out of order. Other players could even mess with you and I don’t see it being much of a problem. The game includes an alternate rule where the other player/team gets to set the starting order of your discs. This rule won’t really work since it will then be too hard to get the discs to the bottom in order.

Component wise the game is decent. Being around 40 years old (my version is the 1979 edition), the game was still functioning pretty well despite looking like it was played quite a bit. The wheels do turn hard at times though and I noticed the chips tend to get stuck every so often. The components are pretty bland looking but do a pretty good job serving their purposes.

Downfall is a very average board game. The game can be fun if you don’t mind that the game relies quite a bit on luck. If you play the game enough your knowledge of the board will allow for more strategy in the game but I think that will also take away some of the enjoyment. What keeps Downfall from being a good game is the reliance on luck and the fact that it seems like you have to rely on your opponent(s) making mistakes to win the game. Downfall is a simple game and is meant to be a game that you just play to have fun and don’t take too seriously.

At the end of the day we at Geeky Hobbies were kind of mixed on Downfall. I thought it was an okay game that had some interesting ideas making it a very average game that you could kill a little time with. My brother on the other hand thought the game relied way too much on luck and didn’t have much to the actual gameplay. I think both opinions are valid and the final score is kind of a mix of our two feelings on the game.

As far as recommendations it mostly comes down to how much the game’s mechanics appeal to you. If you like the idea behind the game and don’t mind that the game has a lot of luck involved, you should have some fun with the game. If you want a game that doesn’t rely much on luck though I don’t think Downfall is going to be for you. Either way I would probably only recommend picking up Downfall if you can get a good deal on it.

If you would like to purchase Downfall, you can purchase it on Amazon here

Thank you for that speedy response. I had not played Downfall since the late 1970s , when my children were young, and I can not remember how we interpreted that rule.

In Downfall, can a wheel be turned one way, then the other, within one turn ?

The rules for Downfall don't specifically say whether it is or isn't allowed. As it is not specified either way, I am assuming your group could choose whether or not you wanted to allow it. When we play the game we allowed players to turn the wheel one way and then the other way in the same turn as the rules only say that you can only turn one wheel and it can't be the wheel that the last player turned. As you can turn the wheel as much as you want, I believe that you should be able to turn the wheel both ways if you so chose.