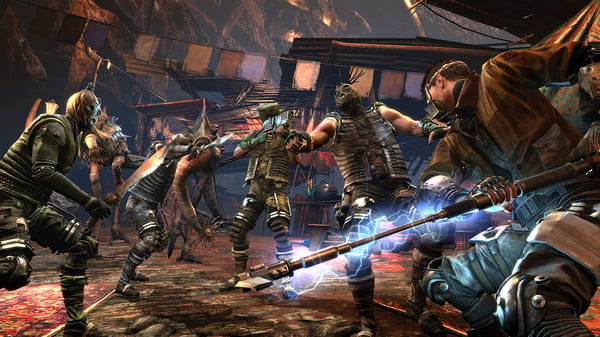 As the semi sequel/spinoff of the 2013 game Mars War Logs, you are once again brought to Mars. You play as Zachariah Mancer a new recruit of the Technomancers. For those of you who haven’t played Mars War Logs, a Technomancer is a soldier that acts as a warrior/peacekeeper that uses their ability to control electricity to keep the peace. Mars is run by various rival corporations that control the most precious resource on Mars, water.

If I had to classify The Technomancer I would have to say that it is an action RPGs like Mass Effect or more specifically Jade Empire. The Technomancer is not as good as either game though in my opinion.

It has been many years since I have played Jade Empire but the combat in The Technomancer reminds me a lot of it. Basically the combat in The Technomancer is broken down into four different styles. You have the Guardian style which is your basic tank character that uses a shield and can take a lot of damage. You have the Rogue style which is basically quick and ranged attacks. You also have the Warrior style which uses a lot of two handed weapons and is your basic warrior class that focuses on just hitting the enemies. Finally you have your Technomancer powers which use energy to allow you to do certain things with your electrical powers.

One of the things I liked about The Technomancer is the use of different fighting styles. Unlike most games where you need to focus on just one of these types of combat, The Technomancer allows you to utilize them all at the same time as your needs arise with just a press of two buttons. This works really well in the game and actually encourages you to change up your fighting style to fit your current situation.

Combat as a whole plays a lot like most melee style RPG games. The game has a couple attack buttons and you can set up button combinations that allow you to quickly use items or use your Technomancer abilities. The key to the game though is your dodge button. While it is not as important when you are only fighting a couple enemies, when you are facing a lot of enemies the dodge button is crucial. You can be overwhelmed pretty quickly which will force you to spam the dodge button until you find an opening to deal a couple blows. You then need to go back to dodging. If you love spamming attack buttons and don’t care for dodging you probably won’t like the combat in Technomancer.

Overall the controls work well but feel clunky at the same time. Changing between styles is really easy and most of the buttons seem pretty responsive. The combat looks really nice because the different attacks flow together quite well. The attack/movement animations create some issues though. It is a lot harder than it needs to be to move precisely in combat or during normal movement. Sometimes it is really hard just walking up to an NPC since it is hard to control where you character stops due to some of the movement animations.

While I am talking about the combat I need to address the game’s difficulty. Overall I would say the game is moderately difficult. If you are bad at games where you have to dodge a lot you are going to have trouble with the game. The biggest problem with the difficulty is that you seem to be thrown into fights that you have little chance of winning. I have encountered several quests that have sent me to areas where my companions would be killed in seconds. I then had to fight six or seven enemies at the same time which you have to be really good or lucky to do by yourself. This was only on normal difficulty as well. The game really should have implemented some sort of system that would tell you how difficult a mission is before you waste your time completing part of it just to find out that you are not strong enough to complete the whole mission.

Outside of combat you have most of your typical RPG mechanics. There are a lot of side quests which sometimes give you choices on how you would like to finish the quest which impacts how the different factions look at Zachariah. The game also includes a lot of character customization elements. The game has a couple different tracks to use skill points on for each level gained. The game also has equipment and crafting. These elements work and give you a lot of customization options but at times it kind of felt like overkill and I never got that involved in it. These customization options also seem to work against the idea that you can switch between all of the different styles. You could spread out all of your skill points between the different styles but you will then end up not being strong at any of the styles. The game ends up forcing you to pick one or two battle styles.

At this time I have played the game for around five to six hours and I don’t think I am even close to finishing the game. I would guess the main quest is around twenty or so hours and there is probably just as many side quests if the rest of the game is anything like the first five to six hours. Since I haven’t completed the whole game I can’t comment on the entire story but I can say that the game has some interesting ideas. The game world is interesting and feels like it could be a strong point in the game.

Currently the game has some technical glitches/bugs. This is based off the pre-release copy of the game so these issues may already be fixed or a fix for them could be coming soon. I haven’t encountered anything game breaking but some of these bugs can take you out of the experience. I encountered some graphical glitches where people’s body parts phased through objects and other graphical issues that stood out. The game has other technical glitches like a laugh out loud moment I encountered. The main character was talking about some secret information with one of your companions. The whole conversation was about how this information must be kept secret. The problem is that for some reason the companion character wasn’t by the main character but down the street/pathway so the two characters ended up yelling this information over several hundred feet. I am guessing that information isn’t secret anymore. These glitches aren’t game breaking but they do at times take you out of the experience.

It is kind of hard to judge The Technomancer since there are things about the game that I like quite a bit but there are other things that could have used some work. Overall the combat is pretty good/fun but it kind of gets repetitive and relies too much on spamming the dodge button especially in battles that have a lot of enemies. The RPG elements give you quite a few customization options but kind of feel like a waste since they almost force you to pick a style or two to focus on instead of utilizing all three fighting styles. The game looks like it has a lot of content but it has some little technical glitches that while not ruining the game sometimes take you out of the experience.

Overall I would say that The Technomancer is a solid but unspectacular action RPG. The game is fun and should appeal to RPG fans but there are better RPG games out there. If you haven’t played Mars War Logs I would probably recommend playing that first since the story will probably be easier to follow with some backstory. If you really enjoyed Mars War Logs I would guess that you would also enjoy The Technomancer. Otherwise if you really like action RPG games I would recommend picking up The Technomancer at some point.

If you would like to purchase Technomancer for PC you can purchase it on Steam. You can also purchase the game on PS4