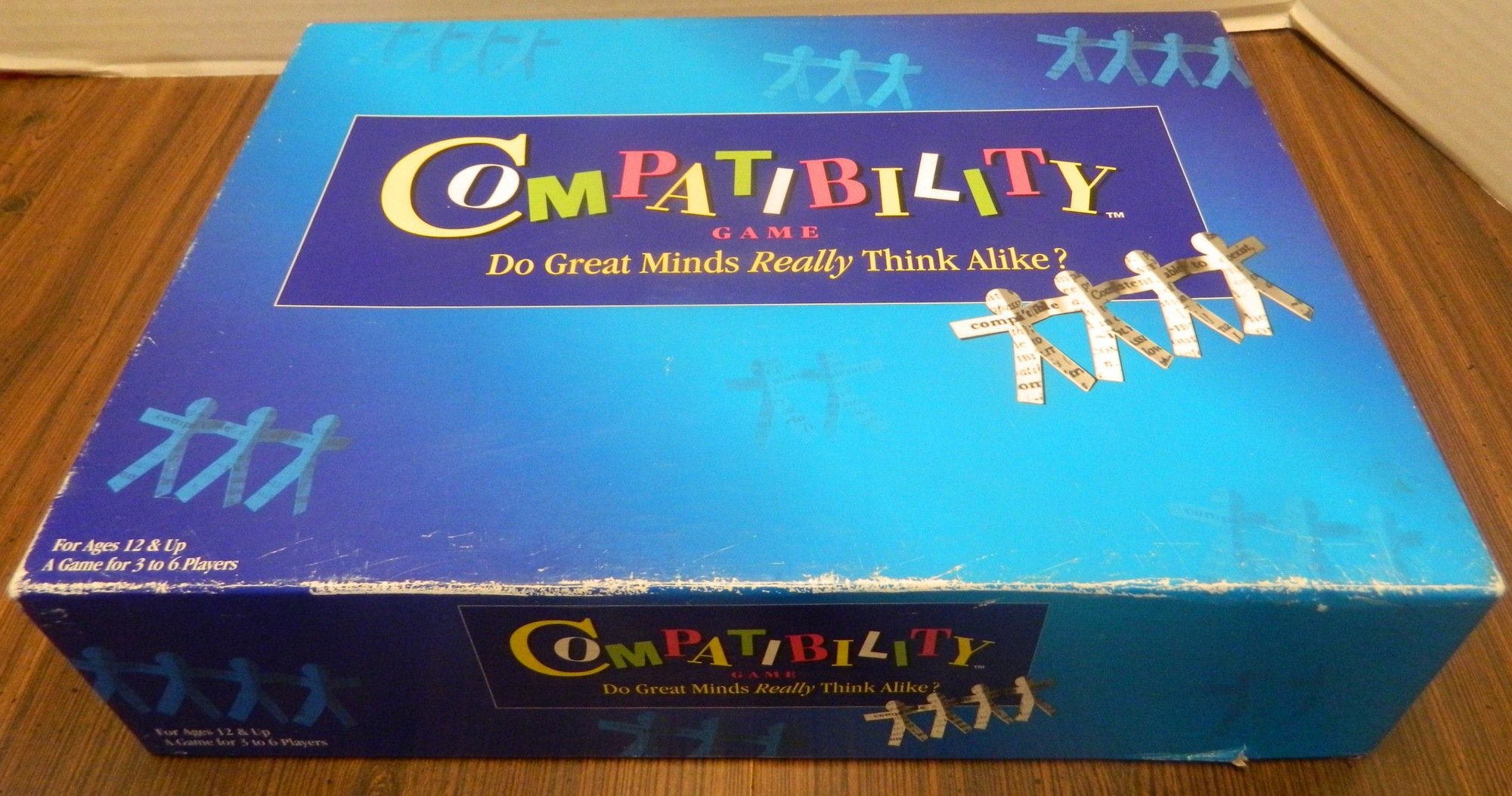 To begin the game all of the players choose their partner for the game. Once the groups are picked, the teams pick their playing pieces (red/white, blue/yellow, green/purple). Players take the deck of cards that correspond to their color. All of the pawns are moved to the start space. The topic cards are placed on the corresponding spaces on the board. If you choose to use the double up cards, each team gets three of them.

To begin each round a topic card is picked and the die is rolled. The word that corresponds to the number rolled will be used for the current round. All of the players need to pick cards that they believe represent the round’s word. Players look at the space that their pawn is on the gameboard. Each team will get to chose as many cards as the number on the space that their pawn is currently on. The goal of the round is for both members on a team to pick the same cards from their deck. Once a player has picked their cards they need to rank the cards based on how they represent the round’s word.

Once all of the players have picked their cards and arranged them, the cards are revealed and points are scored. Each team earns three points for every card that both players ranked the same (placed in the same spot). If a team played a double up card (needs to be played before the cards are revealed) and they get an exact match, the team gets six points instead of three. Teams also score two points for every card that both players have chosen but are not in the same position. Teams move their pawns equal to the number of points scored in a round.

When one team reaches the finish line, that team is the winner. If both teams reach the finish line on the same round, a playoff round is played and whoever scores the most points wins the game.

In 1996 before games like Apples to Apples and Dixit became popular, Mattel put out a game named Compatibility. Compatibility was created as a game to test how well two people knew one another. Over the years several versions of Compatibility have been produced. The copy I am reviewing is the 1996 version of the game. Overall I found Compatibility to be a good but not great game.

Overall I think Compatibility is on pair with Faces and Apples to Apples. I haven’t played the normal version of Dixit so I can’t really make a comparison between the two games. If you really like Faces, Apples to Apples or Dixit I think you will enjoy Compatibility quite a bit. If you only somewhat like one of those games and don’t play them very often it may not pay to get Compatibility since it is not unique enough from the other games to justify another purchase.

Being in the Right Mindset

Compatibility thrives best in a party environment. The game takes a couple minutes to explain and it is easy for people who have never played the game before to pick up. To fully enjoy the game all of the players have to be in the right moods though. Compatibility is not really a competitive game. Obviously one team will win the game but the real enjoyment in the game comes from seeing what pictures you and other players choose to play for a given word. It can be funny when two people who should be compatible come up with completely different pictures to represent a word.

Being in the right mindset is really important because it is actually quite easy to cheat in the game. If two players really want to win and don’t care if they suck all of the fun out of the game, they can just keep playing the same cards over and over again even if they don’t pertain to the word of the round. If someone plays the game like this, the game will be terribly boring and the whole point of the game will be ruined.

Based on the components supplied in the game, there can be between 3-6 players. If there is an odd number of players, one player becomes the judge and all of the other players try to match them. I played the game with four players so I never tested this other option for playing the game. The game plays perfectly fine with four people but I think having six players would be better since this game works due to the atmosphere it creates which should work better with more people.

The game comes with six identical decks of 54 cards. The photos in the game range from simple words, colors, and normal photographs. With 54 cards you would think there is a lot of variety in the cards. That is true in some ways but the game also seems to end up using the same cards over and over again.

At least in your first couple of games you are likely to use a lot of different cards since each card works better in some scenarios more than others. The problem is that even with 54 choices you will tend to reuse quite a few of the cards. In the game I played several cards ended up being played by the same people multiple times in the game. Unfortunately if you get tired of the same pictures there is not a whole lot you can do with the cards provided with the game. In order to add more variety to the game you could either buy a different version of the game (supposedly the different versions have different pictures) or you could use some free images from the internet and create your own cards.

While I like that the game has quite a few cards, the game needed to come up with a better way to handle the cards. I think it is too tedious to deal with all 54 cards at once. You end up spending a lot of time flipping through the same cards time after time in order to find the card you are looking for. It is hard to handle 54 cards while looking for cards to use. Since there are so many cards it is actually best to create a pile of pictures that somewhat pertain to the word. You can then go through this “short list” to pick your final cards.

What I think the game should have done is to create several decks for each player. There could have been an “A”, “B”, “C”, etc decks that had about 20 cards each. Throughout the game you could change decks in order to keep the cards fresh. Using different decks would reduce the time spent each round looking through all of the cards. With fewer cards in each deck it would be easier to match your partner so the rules would probably need to be altered slightly.

The Hit or Miss Topic Cards

One of the bigger issues with the game are the topic cards. For the most part the words on the topic cards are pretty good. They usually are not too abstract or too obvious. These rounds are the best since you need to make educated guesses in order to match your partner.

Some topic words can be way too easy though. For example one of the cards drawn during the game I played was “zoo”. My partner and I had to choose three different cards. It just so happens that there were only three animals in the entire deck of cards. Not surprisingly we both picked all three animals and even placed them in the correct order. With the topic word being so easy, that round was not particularly satisfying.

On the other end of the spectrum some of the words included on the topic cards are quite abstract. Being so abstract, none of the pictures really apply. You then pretty much have to just randomly guess pictures. Just like the simple words, these rounds aren’t very interesting since it is not very satisfying to just randomly guess the same picture as another player.

Overall the components are pretty much what you would expect.

The gameboard is pretty bland but it serves its’ purpose. I think the gameboard should have just started with five spaces and went down the further along you are. Instead the numbers become more and more random. This adds unnecessary luck to the game since being able to play more cards is a distinct advantage. With how the board is situated you can get lucky and land on a high value space and be able to avoid a lot of the low value spaces.

The player pieces are only made of plastic but I actually liked them quite a bit. The game comes with six halves of a person. The halves are snapped together in order to indicate the different teams that are playing. The pieces are not highly detailed but I thought the concept of snapping the two halves together was pretty creative.

Overall the picture cards are pretty well done. The cards are made of your typical cards stock. The pictures have some pretty good variety. I think the deck of cards comes with too many word cards though.