I hope you’re good at math since Bupkis is a game that will definitely put your math skills to the test. The goal of the game is to use ten cards from a standard deck of cards and add, subtract, multiply, and/or divide them until you match the number you drew from the number deck of cards.

Each player starts with a beginning score of 500 and the goal is to get that score down to bupkis (zero). You do this by winning rounds. The game begins with ten cards from a standard deck of cards being dealt to each player. Each card has a value equal to its face number (for the face cards, jacks = 11, queens = 12, kings = 13, joker = any number from 1-13, and aces = one). After they receive their hands, they also get a card from the number deck. These cards range from bupkis to 2,568 and also tell you which types of operators (addition, subtraction, multiplication, and/or division) you can use in an attempt to reach that number. Some of the number deck cards have two or three different numbers on them. If you get one of these cards, you must use your ten cards to form all of the numbers on the card without reusing any cards. 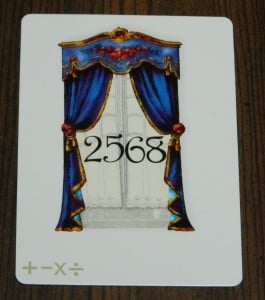 This is an example of a number deck card. If you draw this card, your goal is to reach the number 2568 and you can use any or all operators (addition, subtraction, multiplication, and division), as noted in the lower left corner.

Before each turn begins, players also have the option of taking the top card in the discard pile or one from the deck (they must do one or the other). After they have chosen their new card, they also discard one card from their hand and place it on the top of the discard pile. After they have replaced one of their cards and drawn their number from the number deck, players begin trying to “go out” by adding, subtracting, multiplying, and/or dividing (depending on which operators they are allowed to use) their ten cards together in an attempt to reach their goal number. 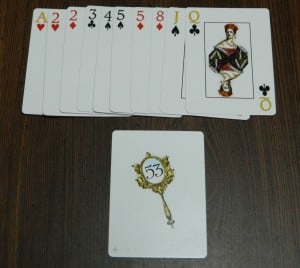 Once a player has attained their goal number, they draw a card, lay their hand down, and discard a card. They then demonstrate the operations they used to get to their goal number. If they are correct, the loser lays down their hand and the winner of the hand gets five points for each card from Ace to ten. Face cards (jacks, queens, and kings) are worth 10 points a piece and jokers are worth 25. If the losing player can prove they formed any of the numbers on a triple number card, those cards are excluded and score the winning player no points. The winning player subtracts these points from their total (it starts at 500 and goes down after each round won). If the player’s math is incorrect, all points from the player’s hand go to their opponents instead.

If a player drew one of the two bupkis cards out of the number deck and is able to use their cards to reach zero before their opponent “goes out,” their opponent’s hand points are quadrupled (multiplied by four). However, if they are beaten their opponent gets an additional 50 points. The first player to dwindle their beginning score all the way down to bupkis (zero) is the winner.

Players may use a piece of scratch paper (or even a calculator) to help with calculations (though this will obviously slow you down). As long as your number card allows it, you may use multiple different types of operations to get to your goal number (i.e. you can multiply some numbers and add others). However, algebraic functions and sums in brackets (i.e. (2 + 2) x (5 + 5) = 40 is not allowed, instead it would 2 + 2 = 4, 4 x 5 = 20, 20 + 5 = 25). Basically, each number must be added, subtracted, multiplied, or divided individually. Players also cannot go into negative integers at any time.

As a person who has always been able to add, subtract, multiply, and divide numbers in his head with little to no problem, “Bupkis” is pretty much right up my alley. I would definitely say I’m a natural with numbers. That’s good for me because this game can even be hard for people who love math. Taking ten numbers and turning them into a large number or three different numbers can be very tricky. Personally, I find math problems to be pretty fun to solve. If you don’t, do not buy this game. It is strictly for math fans and you will just be bored and irritated by the difficulty of the game. If you do like math, “Bupkis” is a pretty good concept and definitely worth playing.

However, I’m not exactly sure “Bupkis” is worth a purchase. This is simply due to the fact that you could easily make the game yourself. You won’t get the nice art on the cards but all you need is a standard deck of cards and some index cards (which you’ll have to write various numbers on yourself). That’s all you need to play the game. Why pay $20+ for two decks of cards you can easily replicate?

Even though “Bupkis” isn’t really a good value from the point of what you get for your dollar, it is a good game for math fans. Even though board games require logical thinking, they rarely are math-based. “Bupkis” is one of the few math-based games I’ve ever played. It isn’t easy either, my first turn I was forced to use ten cards to get to 53 while only using addition. Next turn, I drew the 2,568 card where you can use all four operations. I thought I had no chance that round but I actually found a way to get to that number. It took me at least ten minutes but it was very satisfying to figure that math problem out.

Some people might actually think “Bupkis” is too hard. In some ways, I agree but I think it makes winning a round that much more satisfying. Unfortunately, since most of the numbers are hard to reach this game does involve a lot of sitting around thinking. Some of the rounds in our game were over in minutes while others could have taken thirty minutes if we were fiercely competitive (instead we just decided we weren’t going to figure out a way to get to our numbers and started a new round).

One small annoyance with the game, I wish instead of using a standard deck of cards they would have taken out the face cards and just put their actual numbers on them. It’s pretty irritating to have to think of what a Jack, Queen, or King equals when you are attempting to solve tough math problems. Replacing Jacks with elevens, Queens with twelves, etc. also would have added some value to the game (you would need a special deck of cards instead of just a standard one).

As a concept, “Bupkis” is very good especially for math fans. However, as a product I can’t recommend a purchase. It’s just too easy to replicate the game yourself and definitely not worth paying well over $20 for two decks of cards. If you like math, find a deck of cards and make a number deck yourself and give the game a try. If you don’t like math problems, stay far, far away from this game.