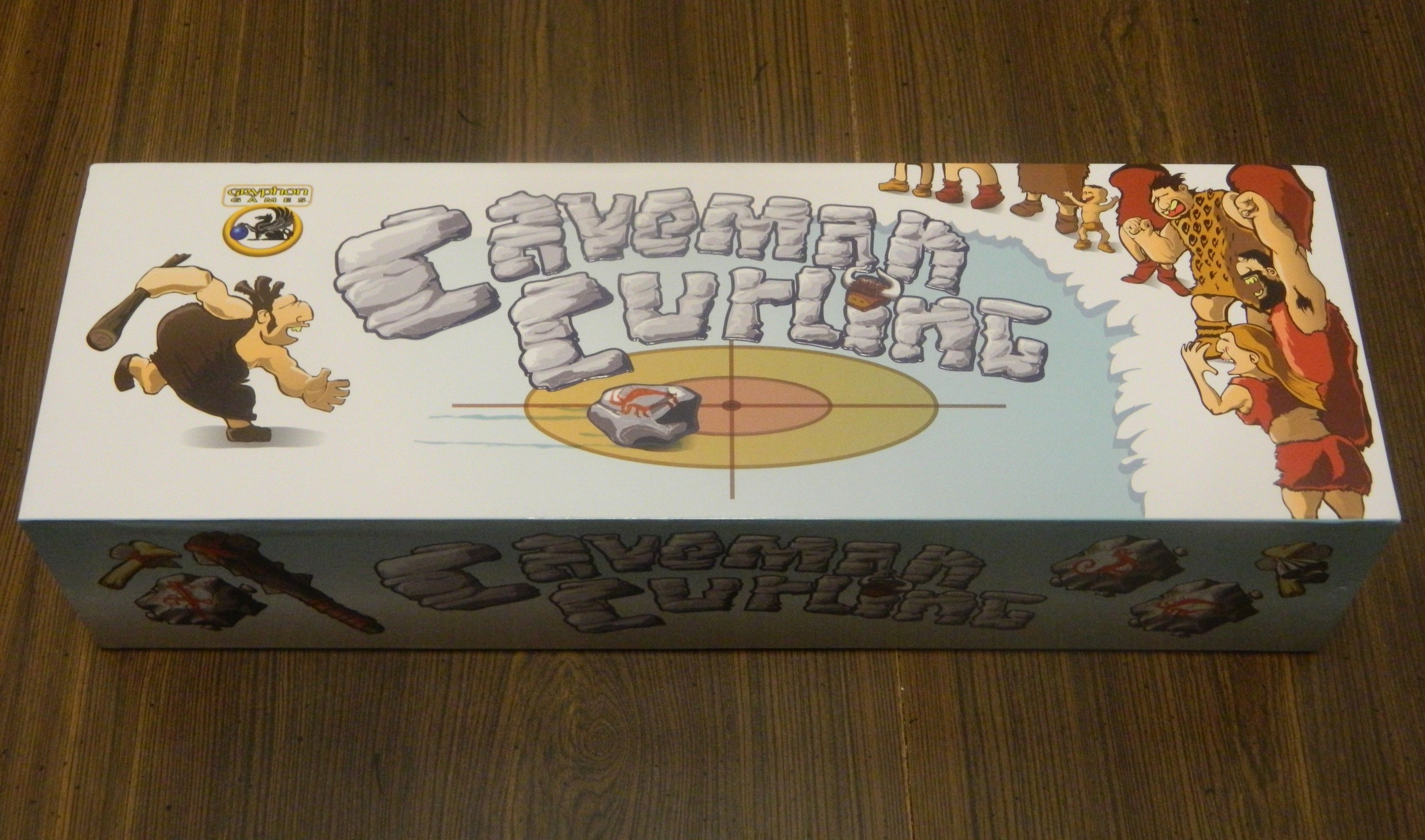 As you might have guessed, “Caveman Curling” is basically a tabletop version of curling. If you don’t know what curling is, it’s a winter sport with a lot of similarities to shuffleboard. In curling, you are trying to throw a 38+ pound stone down a 150-foot sheet of ice and attempting to get it as close to the “house” (the scoring zone) as possible. Except for the heavy stone, lengthy sheet of ice, and lack of sweeping (yes, curling involves sweeping with a “broom”) that’s pretty much what “Caveman Curling” is.

Gryphon Games’ “Caveman Curling” is very simple to play (the rules are so simple you could just read the back of the box and know what you’re doing). The game is for two players or teams (if you play in teams, just switch off throwing the rocks). The goal of the game is to end the round (6 throws per player/team) with your rocks closest to the center of the “cave” (the game’s version of a curling “house”). Each rock that is closer to the center of the cave than your opponent’s scores a point (if you have two, three, even more rocks closer than any of your opponents you score a point for each). The first player or team to score 6 points wins the game.

Each round consists of 12 throws (6 per player or team). To attempt a throw, simply place your rock behind the back line and flick it with your finger towards the “cave.” If your rock stays on the board and gets past the mammoth’s line (the mid-point of the board), you can then use a special object on it. These special objects are two totems (which somewhat protect your rock), two small hammers (which allow you to “hit” your rock a slight amount more in any direction, usually closer to the middle of the “cave”), and two large hammers (same as the small hammer but over double the size). If a totem is knocked off of one of your rocks, you get the option of re-throwing the rock at the end of the round (being able to throw last is a big advantage). However, if you like where your rock ended up you are allowed to keep it there (you don’t get a chance to re-throw it even if it later gets knocked off the board). If you want to play a hammer, place it right next to the rock you just threw (any direction) and move the rock to the other side of the hammer (and then remove the hammer from the board). You are not allowed to hit another player’s rock or make it move in any way when using a hammer.

After a player has thrown a rock and played a totem or hammer if they wish to (you don’t have to but there are enough special objects that you can use one for each throw in a round), the opposing player or team does the same thing. Play continues in this way until all 12 rocks have been played (and any rocks that had their totems knocked off are thrown again). After that, look at the cave and determine which player or team is closest to the center. That player or team gets a point. Then look for the second closest rock. If it belongs to the opposing player or team, the round is over and the closest player just scores one point. If it belongs to the same player, they get a second point. They will keep getting an extra point until the opposing player or team has the next closest rock or they don’t have any more rocks in the scoring zone (theoretically you could score six points in the first round and win but that’s nearly impossible). Only one player or team can score in a round.

There are some small technicalities to the rules. If any rock flips upside down at any point, it is discarded (I’m not sure how you would manage to do this without it going off the board). If you throw your rock and it doesn’t cross the center line, it is removed from play. It isn’t stated in the rules but I’m assuming a rock is also removed if it flies off the board or hits “the slammer” (the back of the board) and bounces back in. That’s how we played it at least.

I had some very mixed feelings after playing “Caveman Curling.” While it’s a reasonably fun dexterity game (and very family-friendly), there are some problems with it. First of all, it is really hard to shoot accurately by flicking the rock with your finger. Until we modified the rules to allow sliding the rocks, our accuracy was terrible. I’ve actually played a real game of curling (a very fun experience by the way) and it was arguably easier to accurately throw the heavy curling stone 150 feet than it was to flick these tiny rocks the amount you want. It is far too easy to over hit them and if you try to compensate for it, then you won’t even make it past the center line. Sliding the rocks makes things quite a bit easier so if you are having trouble flicking the rocks accurately, consider allowing sliding instead.

There are also a few mechanic problems. The biggest one is that the throws happen so quickly it’s sometimes hard to see what happened. Did your rock hit the slammer in the back and bounce back onto the board? If you put up blockers on the sides of the board to stop rocks from flying off the table (like we did), did it bounce off one of them? Unless you are afraid of losing your rocks, I would actually advise against blockers because it makes it too hard to figure out if your rock hit one. This is one of the few games where you might just have to let pieces fly around the room.

Also, I think the game made a mistake by including six special items per round (you can use one each throw if you’d like). The idea of the hammers is good (and the totems are decent but exploitable) since the game needed a way to introduce more precision to your throws. They work well, you just shouldn’t be able to use them four times in a single round. I think the game should have just included two hammers (one small, one large) or made it so that if you use a special item, you can’t use it again for the rest of the game. The totems are a so-so idea because they basically reward poor throws. In our game, everybody would just use a totem if their rock didn’t get into the cave. Since they were almost always under-throws, it is hard to avoid them the entire round and they will almost certainly get a chance to re-throw the rock they placed it on (and most likely get the last throw of the round). I would definitely consider playing with just one of each special item or only allow each item to be used once the entire game (you don’t get them back at the end of the round) to add a bit more strategy to the game. You would then have to decide on the best time to use them instead of just using a special item each turn.

On the other hand, there are some good things about “Caveman Curling.” First of all, the “special” board (which is actually a specially made sheet of paper) works surprisingly well. I had a feeling the rocks might not slide that well on it but they actually move very well (they probably slide a bit too much if anything). The rest of the components are also pretty well made, all of them are wooden and I have no complaints about the quality. The game’s art is also pretty well done, it won’t win the game any awards but I liked the art style quite a bit.

Obviously with board games, the only thing that ultimately matters is if the game is fun. “Caveman Curling” passes that test even with some of the problems I mentioned earlier. It’s a fun tabletop version of curling or shuffleboard, though frustratingly hard at times. It is very satisfying to flick a rock that lands in the cave or to knock your opponent’s rock out of the cave and replace it with yours. Curlers and shuffleboard players in particular might enjoy this game (it makes for a nice game to play in the offseason of those two sports). I wish the game was somehow able to replicate the broom sweeping element of curling but that obviously wouldn’t work in a tabletop game. Otherwise, it’s a pretty good re-creation of curling and shuffleboard.

Like curling and shuffleboard, there is a bit of strategy to “Caveman Curling.” While most of the game comes down to who can most accurately flick their rocks, rock placement and strategy is important as well. Like in curling, if you get an early rock into the cave you might want to set up some guards (blockers meant to protect your rocks in scoring position). The hammers allow you a lot of flexibility in your rock placement, making it easier to block and find positions where your rocks are pretty safe. Obviously “Caveman Curling” isn’t exactly a strategy game but it has more than most dexterity games.

I know this review sounds pretty negative but “Caveman Curling” isn’t a bad game, it just has a few flaws. There aren’t a lot of good dexterity games out there but I think “Caveman Curling” is one of them. While it isn’t amazing by any stretch of the imagination, it is quite fun and great for families. I am a little biased since I am a curling fan (as soon as I saw that oddball sport in the Winter Olympics I wanted to give it a try) but I do think this is a good game that even non-curling fans should enjoy. Until I’m ready to actually play in a curling league, “Caveman Curling” is a decent substitute.

Even with some flaws to the game, “Caveman Curling” is a pretty solid dexterity game that makes for a good appetizer game before or after your main game. It is actually one of the better dexterity games I’ve played thus far. Curling and shuffleboard players will likely get the most enjoyment out of it but as long as you like dexterity games, it should be a good pick up. I wouldn’t pay the suggested retail price ($49.99) but at the current Amazon price (around $20) it’s probably worth it if you like dexterity games.