To begin the game, assemble the game board and the line-up board. Sort the faces deck into a male, female, and animal deck. Separate the choice cards by color and give each player a set of cards and a matching pawn. 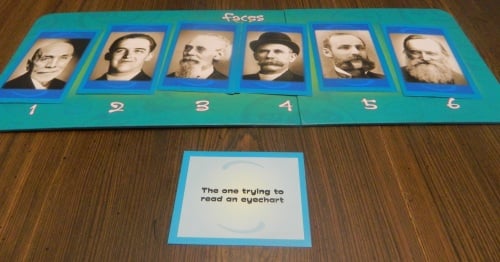 After the three “Line-Up” rounds are complete play continues onto the “Card-In-Hand” round. In this round each player will be the judge for one round. Each player get 2 male, 2 female and 2 animal cards. An impression card is turned over and all of the players (besides the judge) play one of their cards that they think best represents the description on the impression card. Cards are played so the judge is unable to know who played which card. The judge then looks through all of the cards and picks the card they think best represents the description on the impression card. Whoever’s card is picked by the judge gets to move their piece forward three spaces. All of the players who played a card needs to draw a new card of the same type they played. Once everyone has had a turn as judge, the round ends.

If no one has reached the end space yet, play continues which starts with a new “Line-Up”round. When someone reaches the finish spot they are the winner.

Faces is not what you would call a serious game. This is especially true when you get to the animal rounds. The game is weird but that is why the game thrives. If you are the type of gamer who doesn’t like party games that are built around creating laughs, you will not like Faces. Faces has very little strategy so you need to be in the mood to just relax and have a fun time to fully enjoy the game. You enjoyment of Faces will depend on how much laughter you get out of it. The creators of the game tried to find the strangest and funniest old time photos they could find for the people photos. I laughed quite a few times during the game.

Being a party game that feeds on a party atmosphere, I think Faces is the type of game that is better with more people. I played the game with three other players and the game played fine. I think it would have been better with more people though. The game supports three players but I believe that might get kind of boring. The game needs the party atmosphere and with only three players I think that feeling will be lacking. The gameplay itself will also suffer since the judge will only have two other players to pick from during the game.

Overall the gameplay itself is solid. The game really has no strategy. The only “strategy” you can employ is to know the other players well enough that you can get a good idea which card they would pick. That rarely works though since at least in the line-up round, most players have pretty different opinions on which card works the best. There are some impression cards that present a pretty obvious selection but on most cards you pretty much need to just randomly guess.

One thing that I really like about Faces gameplay is that there is an incentive to try and match the other players. Everytime you match another player as either the judge or a normal player you receive a point. This encourages you to try to play the game straight and not try to cheat the system. In some party games it is actually beneficial to try to not match the other players. With that type of scoring system players can try to game the system as the judge by trying to avoid giving other players points. These games get boring quickly if one player breaks the spirit of the game in order to improve their odds of winning. In Faces I didn’t get this type of feeling which is a good thing.

Another positive with the game is the replay factor. Faces could have a long life span if you enjoy playing the game. The game comes with a lot of cards including 194 face cards and 176 impression cards. You could play the game quite a few times before you have a single repeat. Even when you have a repeat it is not a big deal since the likelihood of having the same face cards used for an impression card are very slim. In addition if you were sick of either the impression cards or the face card you could actually pretty easily make your own cards. As a matter of fact Board Game Geek has rule variations and unofficial additional face/impression cards if you want new cards.

The components are pretty good overall. The cards are a little thin but the artwork is nice. The game boards look kind of nice but they really aren’t necessary. I would still use them while playing the game but you don’t need either to play the game. You could just as easily count points to see who wins and you could just place the cards out on a table to avoid using the line-up board.

Overall Faces is a good game. I had a lot of fun playing the game. With that said though it is not the type of game I would play over and over again. It is the type of game that I would bring out every so often if I was in the right mood to play the game.