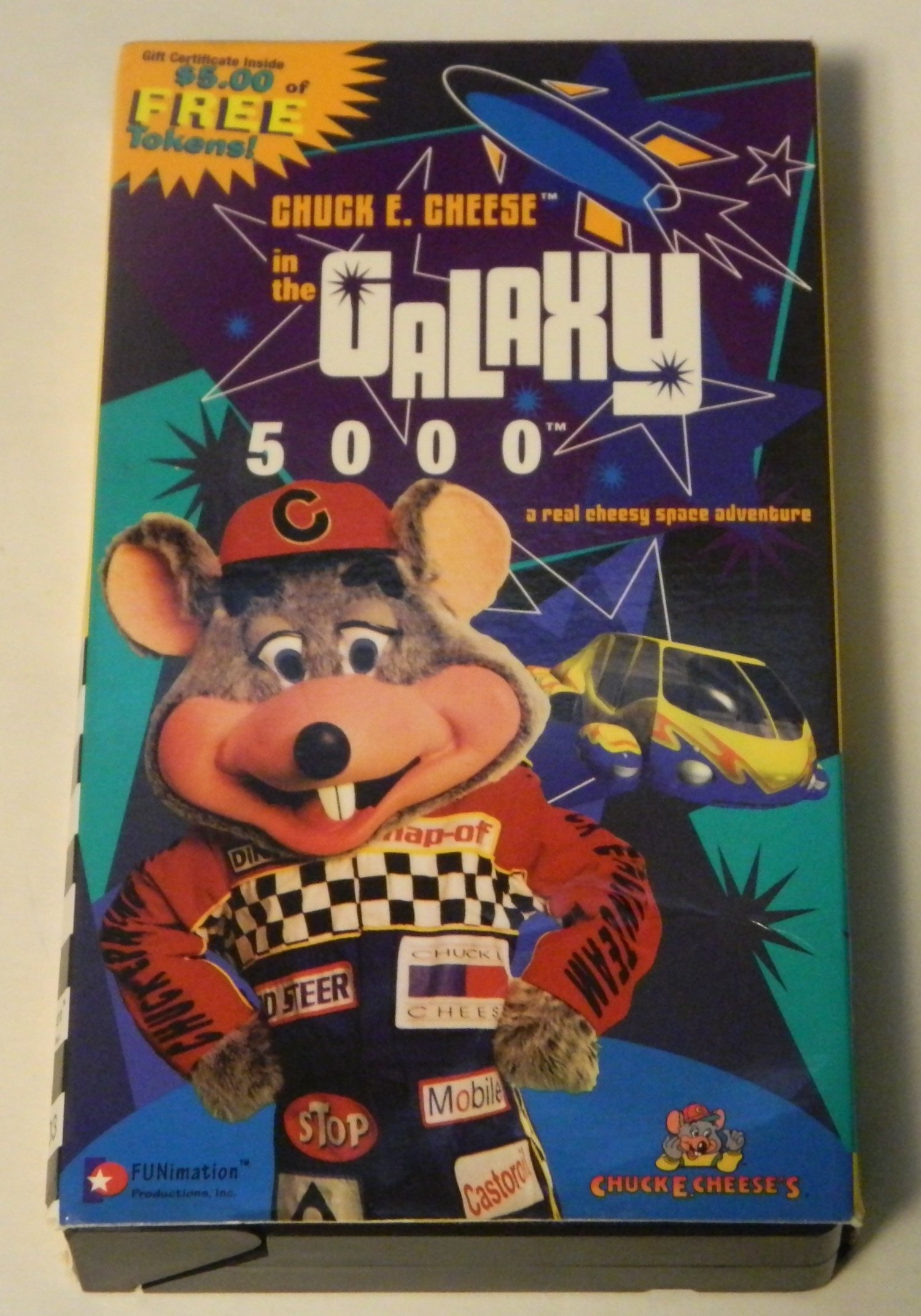 Welcome to VHS Files, the post series where I take a look at movies, instructional videos, and other oddities that were only (or at least mainly) released on VHS. Serious movies as well as unintentionally hilarious VHS tapes will be covered in this series. I wanted to start this post series off with a bang, so I decided to take a look at the best “so bad, it’s good” hidden gem I’ve uncovered so far, Chuck E. Cheese in the Galaxy 5000. This VHS tape was only available at Chuck E. Cheese restaurants and is quite hard to find, but if you can get your hands on it you absolutely should as it is full of unintentional comedy, awful but somehow still surprisingly catchy songs, and an absolutely bizarre plot that makes little to no sense. While some of the other titles I will be covering in this post series have their moments, nothing comes close to the consistent hilarity of Chuck E. Cheese in the Galaxy 5000.

Chuck E. Cheese in the Galaxy 5000 starts off with footage from an actual restaurant in the late ’90s. At an “official meeting” of the Chuck E. Cheese mascots (the costumed versions, not the animatronics), a kid named Charlie Rockit approaches Chuck E. and the gang because he’s in a bind. He needs $50,000 for a new tractor for his aunt and uncle’s farm. Luckily, this Chuck E. Cheese restaurant gets amazing reception that allows it to pick up channels from space. They hear about a space race called The Galaxy 5000 with a grand prize that is conveniently around $50,000. Even better, Pasqually (the chef) is a former space ship racer. Who would have known?

Chuck E. Cheese, Jasper T. Jowls (the dog), Helen Henny (the chicken), Mr. Munch (the purple monster), and the kid teleport to the race location via The Adventure Machine (a Trivial Pursuit wedge looking thing with atrocious special effects). Instead of selling access to the space TV channels, Pasqually’s space ship, or the teleporter (all of which would easily raise the 50 grand), the team decides to compete in the race despite having no experience driving a space ship. The Galaxy 5000 is basically pod racing, which isn’t surprising considering The Phantom Menace came out only a few months before this. The results of these races mostly depend on how early you go to “Vega-2” speeds and if you can hold it without crashing. It wouldn’t be a space race without a villainous, cheating team and in Chuck E. Cheese in the Galaxy 5000 its the Hans and Franz-like X-Pilots (who utilize a performance enhancing drug called Zoom Gas that makes them stupider but also helps them see better when going Vega-2). Will Chuck E. win the race or will Charlie Rockit’s family farm go out of business? Who really cares but you’ll find out as you also get a lot of laughs with the cornucopia of unintentional comedy this film has.

Chuck E. Cheese and space races. What great synergy (though with the popularity of The Phantom Menace and pod racing at the time, I can see why they picked this plot). However, the film is also part musical which makes a heck of a lot more sense for a movie (if you can call a 62-minute VHS tape a movie that is) about Chuck E. Cheese. Songs include the opening number “The Galaxy’s for You and Me,” an awful Helen solo called “The Real Me,” possibly the most boring training song I’ve ever heard (I have no idea what the title of this song even is as its mostly a rambling mess), “Yes, I Think I Can Do It,” and “Shout and Be Happy” to close out the tape. Those songs range from flat out bad to unremarkable. However, there are two absolute bangers in this film (as long as you like cheesy and corny tunes like I do). The first is the amazing vocal stylings of Jasper T. Jowls’ in his incredible country song “A Snowball’s Chance in Texas.” It’s this song that wins my award for best moment of the VHS tape, simply because of the amazing way it begins. Completely unprompted, Jasper just starts singing about his tail getting run over by a pickup. This eventually turns into a song about how they have “a snowball’s chance in Texas” of winning the race, but the beginning is just so random that I almost busted a gut laughing at it. The gang wasn’t even talking about the race at this point, a romantic side plot scene had just ended and two seconds later Jasper is singing about his tail getting run over. The sheer randomness of a costumed mascot based on an animatronic singing about his tail getting run over provided one of the best laughs I’ve ever had from a VHS tape.

“A Snowball’s Chance in Texas” might have provided the biggest laughs of the film (for me at least) but there’s an even better song in this, which I unironically wish was on Spotify. The song is called “Zoom Gas,” and its both highly entertaining and shockingly catchy. Add in some amazing dancing from our Hans and Franz X-Racers and this is a close second to the previous scene I detailed in terms of humor. Those aren’t the only hilarious moments either. There’s also a training montage featuring a Whac-a-Mole like game (whack a mouse with a flyswatter), a budget CGI Fortress of Solitude, the fact that space cops are dressed like old-timey British police officers (and utilize the ball and chain on those they arrest), and a random and awkward romantic subplot featuring a woman named Astrid hitting on Chuck E. Cheese and Helen returning the favor with the X-Racers. Astrid is even played by a pretty well-known voice actor who has over one hundred credits to her name (Lydia Mackay). Apparently on this planet, all humans are in love with costumed restaurant mascots.

That’s not even mentioning the ’90s video game quality special effects. For such a low budget film these effects are used very liberally but only add to the hilarity. Some of the highlights include the crowd being flat on multiple occasions and the animators for some reason deciding to animate an ice cream cone melting for no apparent reason. Throw in some amazing lines from Jasper (“Common sense flies out the window every time he sings a song” and “The only race this thing is going to win is against a cross-eyed turkey with a sprained ankle” are my favorites), the amazingly cheesy acting of the X-Racers (Kenyon Holmes and Rob Flanagan), and a child actor who looks like he’d rather be doing anything else and Chuck E. Cheese in the Galaxy 5000 is definitely a “so bad, it’s good” VHS tape.

If the Amazon and eBay prices are to be believed (it usually goes for $50-60), Chuck E. Cheese in the Galaxy 5000 is a pretty hard VHS tape to track down. While I don’t condone it, it’s pretty easy to find online if you don’t want to pay that price. If you are into B-movies and unintentional hilarity, I highly recommend finding a way to watch this film. I’ve been watching B-movies for a few years now, and this might just be the film I laughed the most at.

Next week on VHS Files: Learn how to win at slots while trying not to get a headache from the awful editing in Winning Slot Secrets: Now You Have a Fighting Chance.