When I turned 21, I used to visit my nearby casinos to play the slots at least a few times a year. They used to be a lot of fun to play but I no longer gamble because the excitement just isn’t there anymore and I grew sick of constantly losing money to those one-armed bandits. As a fan of unintentionally hilarious VHS tapes though, I took one look at the box art (especially the awful print quality and WordArt logo) of Winning Slot Secrets: Now You Have a Fighting Chance and had to pick it up for a dime at a thrift store. I was hoping it would be as hilarious as the somewhat iconic Top Slots: Spotting the Best from Best of the Worst: Wheel of the Worst #16 and the horrible artwork definitely made it seem like a possibility. There are some things to laugh at here (and if you can find it for as cheap as I did, it’s probably worth a pickup) but the quantity and quality of the hilarity never really approaches that classic uncovered by Best of the Worst.

Winning Slot Secrets: Now You Have a Fighting Chance is a 1996 VHS (and somehow DVD) release hosted by David Wilhite, a leading gaming expert with over 15 years of experience according to the back of the box (which took a lot of effort to read due to the poor graphic design choices made). He also hosted at least two other 1996 VHS titles in Craps: How to Play to Win and Poker: How to Play (I guess he only knows how to play poker, not win at it even though it’s the only game of the three that you can actually be a consistently winning player at if you know what you’re doing). Like all of these slot videos, the title is completely misleading. In this approximately thirty minute long VHS tape, Wilhite doesn’t really have any winning slot secret tips to present, he mostly just talks about the same things over and over again (most of which I really wouldn’t even consider to be tips). Things like don’t play at a bar or other areas with only a few machines (as they will pay out less), play with your rewards card, and don’t leave your purse unattended should be pretty common knowledge. Most of the rest of his “tips” aren’t even tips. For example, “focus on how much money you want to win” (which is said at least two or three times) is not a tip. I want to win a million dollars but that isn’t going to help me win that amount. That’s pretty much the gist of this video, with each of these “tips” being repeated two or three times each and then edited in the most bizarre, almost headache-inducing manner possible. Wilhite does make a stop at a slot machine museum to show us some of the history of slots. This would have been the highlight of the video if he wasn’t such a boring presenter (and if he would have done more than likely just read what was on the placard by each machine). 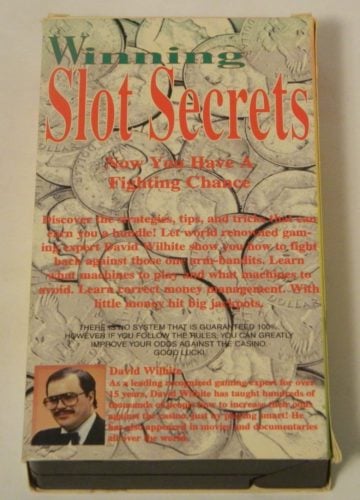 Try not to get a headache as you attempt to read red text over a very obtrusive background image on this horribly designed back of the box.

Most of Winning Slot Secrets: Now You Have a Fighting Chance is just boring “informative” tips on how to play slots that are obviously now quite outdated (and likely wouldn’t have been any help even back in 1996). However, there are a few highlights sprinkled in for fans of unintentional hilariousness. I will note right away that this isn’t a video that is going to have you constantly laughing at the horribleness of it but there are definitely still some things to laugh at with it. The most obvious thing is the editing and filmmaking, which seems to have a serious case of ADD. In between scenes with Wilhite are the most awful and painful to watch cuts/transitions where the cameraman zooms in and out on the sign for every casino on the Las Vegas strip. It looks like horrible three frame stop-motion at times and is extremely tacky even for 1996. Here’s an actual tip, don’t hire a company called “Professional Video Services” to do your editing if you plan to release your finished product to market.

Even worse on the film production side, the cameraperson loses interest in the person who is talking twice. It’s never a good sign when one of your first “shots” is an interview where the cameraperson literally stops focusing on the interviewee to pan to the right to show off a sign (the interviewee is completely off camera at one point). I don’t think a random sign is so important that you have to pan to it and ignore the person talking. Later on, Wilhite is filmed by the doors to a casino. For some reason, the cameraman is probably at least 100 feet away filming him. At one point he decides to zoom in but that only lasts a few seconds before he zooms back out to focus on two old people walking by the casino. I know he’s not the most interesting guy, but keep him on camera at least. Whoever shot this video has no idea how to work a camera. Almost all of the humor in Winning Slot Secrets: Now You Have a Fighting Chance comes from the unprofessional camerawork and editing.

However, the funniest moment in Winning Slot Secrets: Now You Have a Fighting Chance is actually a very small moment that is easy to miss if you aren’t paying attention. It’s technically the best tip in the video if you are an unethical person. Wilhite briefly mentions that while you’re walking around looking for a slot to play, to check the slots you walk by to see if anyone forgot to cash out. If you think about it, he’s advocating for theft with this “tip.” Based on how much he talks about making sure to keep your attention on the slot machine you are playing, I would give at least even odds that he’s done this before. As is tradition with these slot machine videos, it’s always fun to laugh at the hosts for constantly losing when they play a slot machine while utilizing their “winning” strategies. Wilhite has terrible luck early on (I can’t recall a winning spin of his in the first half of the video) but it does improve later on (even though he likely cheated by using his own slot machine when he is shown hitting a big winner). Unfortunately there is no glorious moment where Wilhite runs out of money and has to roam around a casino without being able to actually play the slots like in Top Slots: Spotting the Best.

While I had enough funny content to write three paragraphs about, the problem with Winning Slot Secrets: Now You Have a Fighting Chance is that it just isn’t consistently funny enough. The laughs are from brief little moments and the funny editing quickly becomes annoying after the first two seizure-inducing appearances. I would say most of the thirty minutes is just boring slot machine tips that aren’t the least bit informative. On top of it, David Wilhite is no Jimmy “The Scot” Jordan from Top Slots: Spotting the Best. He just doesn’t have the energy, entertainment factor, or unintentional hilarity that Jordan brings to the table. In fact, I would say he makes for a rather dull host that actually hurts the video rather than helps it.

Winning Slot Secrets: Now You Have a Fighting Chance might be worth a pickup if you find it for an extremely cheap price like I did (it cost me a whole dime) and like poking fun at bad VHS tapes. However, I wouldn’t go out of your way to purchase it online as it isn’t as consistently funny as I was hoping for (and the informative factor is virtually non-existent). For a better time, you should absolutely watch Best of the Worst: Wheel of the Worst #16 (language and violence warning though) as it features the hilarious Top Slots: Spotting the Best. Even better, that tape isn’t even the highlight of the episode as there is an all-timer instructional video in that episode.

Next week on VHS Files: Hat juggling, enough said. Come back on Saturday for our look at Hat Juggling with Andy Head.