Created in 2007, Hexbugs are a line of robotic toys that look like various insects. The Hexbugs move by vibrating which moves the robots forward in a manner that looks like a bug skittering away. In 2013 Ravensburger decided to design a board game which utilized the Hexbug which is today’s game Bugs in The Kitchen. Basically the object of Bugs in the Kitchen is to guide the bug towards your trap in order to score points. While Bugs in the Kitchen can get a little repetitive for adults, it is still an innovative game that children should really enjoy playing.

How to Play Bugs in the Kitchen

Each player chooses one of the corners of the board to act as their trap. If there are less than four players use the doors to block the unused traps. Put the Hexbug, bug tokens, and die to the side of the board. Turn all of the utensils on the board to one of the starting positions. 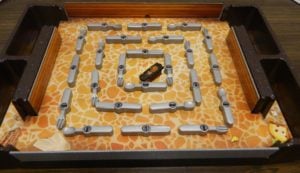 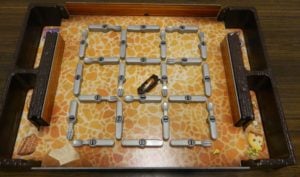 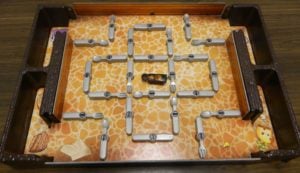 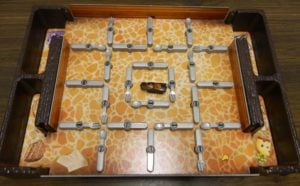 The youngest player starts the game. The Hexbug is placed in the center of the board and is turned on.

On a player’s turn they roll the die. The icon on the top face of the die determines which utensil the player is able to turn. 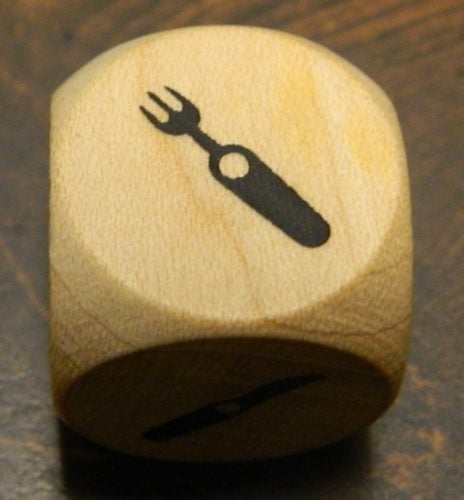 This player has rolled a fork icon so they will get to turn one of the forks on the gameboard.

If the player rolls the question mark they can choose which utensil they want to turn. 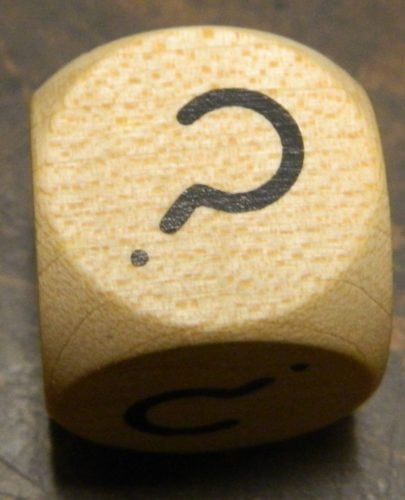 This player has rolled a question mark so they get to choose which utensil on the gameboard they want to turn.

When turning a utensil you have to turn it to a position where it locks into place. If a player takes too long to make their move the other players can tell them to hurry up. 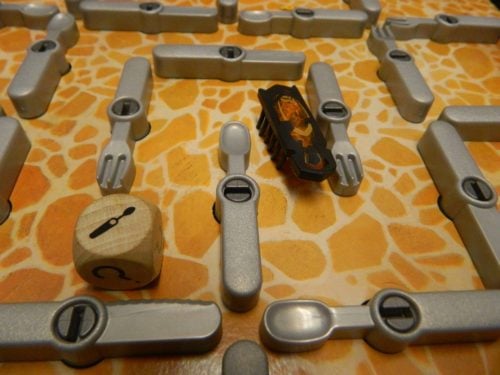 This player has rolled a spoon so they turned one of the spoons on the board 90 degrees.

After turning a utensil, the next player clockwise rolls the die and takes their turn.

When the Hexbug falls into a player’s trap, that player receives a bug token. The Hexbug is turned off and the board is reset to one of the starting positions. The Hexbug is returned to the middle of the board and another round begins. 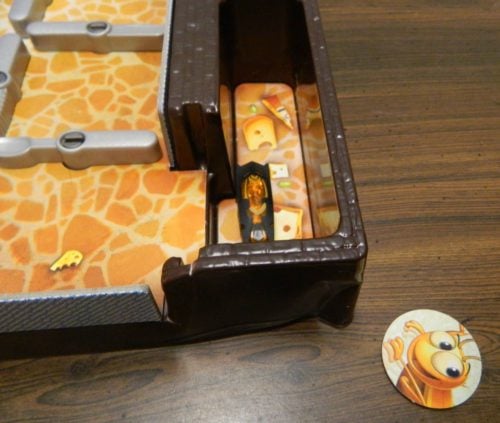 The bug has fallen into this player’s trap so they receive one bug token.

The game ends when one player has collected five bug tokens. That player wins the game.

This player has received five bug tokens so they have won the game.

My Thoughts on Bugs in the Kitchen

When I first saw Bugs in the Kitchen I was a little skeptical. I thought that a game that utilized a robotic bug was going to mostly be just a gimmick. Bugs in the Kitchen looked like a game made to promote Hexbugs. After seeing the game’s rating on Board Game Geek though I was intrigued. The premise of a bug running around the board with players trying to trap it actually sounded like a pretty interesting idea. It might at first seem like a gimmick but Bugs in the Kitchen is actually a pretty solid idea for a board game.

What makes Bugs in the Kitchen work is that the designer took the bug and actually made an interesting board game to go along with it. While electronic components in a lot of board games just seem to get in the way, the game actually does a good job utilizing the Hexbug as a key component of the game. For some reason it is satisfying watching the bug run around the gameboard while trying to get it to fall into your trap.

The strategy in Bugs in the Kitchen is pretty light. Basically all you do in the game is roll the die and then turn one of the utensils on the board. This decision is usually not that big of deal. On most turns it is going to be really obvious what utensil you should turn. There will usually either be a utensil that will really help you or hurt another player. Otherwise you should probably just turn a utensil near your own trap.

With there basically only being one decision to make in the game it should come as no surprise that Bugs in the Kitchen is really easy to learn and play. The game should only take minutes to teach to new players. While the game has a recommended age of 6+ I think children under six may be able to play the game. They might have some trouble understanding the strategy of the game but I don’t see younger children having trouble understanding how to play the game.

For the most part Bugs in the Kitchen’s components are pretty good. The Hexbug itself is pretty cool. It actually does a good job simulating a bug outside of it regularly getting stuck in corners. Most of the components are made out of cardboard but the cardboard is pretty thick. The artwork is pretty nice as well. The die is perfectly fine even though I kind of wish the game would have included a second die so you wouldn’t have to waste so much time passing the die around the table. The only real complaints I have are that the plastic portions of the gameboard are a little thin and the Hexbug seems to run through batteries pretty quickly.

I think the biggest problem with Bugs in the Kitchen is the fact that the bug seems to have a mind of its’ own. You could create a perfect path towards your own trap and the bug can just decide to go in the other direction. Once I had a straight path set up for the bug to go into my trap but it decided to randomly turn two corners and go into another player’s trap. While this actually simulates how a bug would probably move, it does reduce the importance of strategy in the game. It doesn’t matter how good you are at creating a path if the bug decides not to follow it.

In the same vein I have to say the Hexbug has a serious problem getting stuck in the corners of the board. While playing the game it seemed like the bug spent more time stuck in the corners than it did moving around the gameboard. When the bug gets stuck in the corners you are supposed to nudge it to get it moving again. In my experience when you nudge the bug it tends to go right back into the same corner. The only way to get it out of the corners is to give it a pretty big nudge. This creates a problem as a player is going to try to nudge the bug in a way that is going to be beneficial to themself. Before the game players should come up with a process they are going to follow to try and get the bug out of a corner without giving any play an advantage.

Other than the bug’s somewhat erratic movement patterns, Bugs in the Kitchen has a problem with becoming a little repetitive. Once you have played the game for a while, it becomes somewhat boring doing the same things over and over again. I don’t see this being a big problem for children but I think it is a problem for adults. Adults will likely enjoy playing the game with their children but I see the game becoming boring somewhat quickly if you don’t have any kids to play the game with.

Should You Buy Bugs in the Kitchen?

If you have younger children that would be interested in the premise of Bugs in the Kitchen, I think they will really enjoy the game.  If this describes you I would recommend picking up Bugs in the Kitchen. If you don’t have young children though you might find the game to be a little on the boring side. If you can find the game for cheap though I think it is still worth picking up since it is an unique gameplay experience.

If you would like to purchase Bugs in the Kitchen you can find it online: Amazon