With a name like B.S. The Game you might think today’s game is an adult themed party game. This is a case of the game’s name being a little misleading. B.S. The Game is a trivia game where players are able to lie about the answer to a question. Players need to be convincing when they lie and be able to detect when other players are lying in order to win the game. B.S. The Game contains some interesting trivia facts but doesn’t have much of a game to go with them.

How to Play B.S. The Game

Each player takes a booklet and a set of betting cards which includes a 5, 10 and 15 truth card along with a 5, 10, and 15 B.S. card. Each player will choose one of the games from their booklet to use for the current game. The player who bought/borrowed the game gets to be the first Teller of Tales.

When it is a player’s turn as the Teller of Tales they will read the statement/question for the current round. Before reading the statement the player will choose one of the three answers written in the booklet or they can make up their own answer. If the player chooses to make up their own answer it must be significantly different than any of the other potential answers for the question.

The Teller of Tales has told the Whopper lie. They will receive 50 points (25 points x 2). 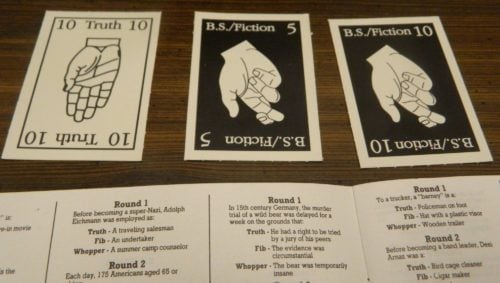 The Teller of Tales told the truth. The player on the left would score 10 points. The players on the right will lose 5 and 10 points.

After points have been awarded the role of Teller of Tales moves to the next player.

The game ends when each player has read all four statements. The player with the most points wins the game.

My Thoughts on B.S. The Game

While I can’t think of any games off the top of my head, the main premise behind B.S. The Game seems similar to quite a few other “trivia” games. Basically the game is a trivia game where you try to bluff while catching other players bluffing. In the game players take turns reading statements and answers which may be the truth or a lie. Players then have to bet whether they believe the player or not. Whichever player is best at bluffing and catching the other players bluffing will win the game.

I wouldn’t say that B.S. The Game is a terrible game but I wouldn’t say it is good either. The problem with the game is that outside of being able to read other people, all you can do is guess. There is a small chance that you might actually know the answers to some of the questions but that is not going to be the case often. The best you can usually hope for is making an educated guess. Since none of our group was particularly good at telling when people were lying, the game basically became an exercise of who could guess the best.

This is the main reason why I found B.S. The Game to be a pretty bland bluffing/trivia game. The problem is that it kind of feels like a lot of the mechanics in the game were just thrown in to make a game out of a set of interesting trivia facts. The gameplay itself is just not that interesting. While you get to choose between telling the truth or lying, the decision mostly comes down to whether the lies feel more like the truth or the truth feels like a lie. The game’s mechanics aren’t broken but they are quite dull.

I think the biggest complaint I have for the game is that I think it would be more entertaining just reading the question booklets. Some of the facts in the book are actually quite interesting. A lot of the time the truthful answers are so out there that you would think that they have to be false. If you like stupid/pointless facts I think you could actually get quite a bit of enjoyment out of reading through the booklets. B.S. The Game is a game though so it is not a good thing that you would rather read the book than play the game.

I personally didn’t really care for the gameplay in B.S. The Game but I give the game credit for giving players bluffing options. If you don’t want to make up your own bluff you can just use one of the included bluffs. If you want to come up with your own bluff though you can and are actually encouraged to do so since you can score more points. I like the idea of different levels of bluffs since it adds a risk/reward element to the game. You can play it safe either telling the truth or a simple fib. If you want to take a chance though you can choose the whopper or your own lie to potentially earn considerably more points.

I really liked the idea of this mechanic but the execution of it could have used some work. For too many of the questions the whopper answer actually sounds like the most likely answer. If you are creative you could easily create a more believable answer than any of the choices printed in the book as well. If the whopper answer or an answer you came up with actually sound believable you should use them most of the time since you can score more points. You can’t always use these answers or people will know you are lying but you should try to use them as much as possible.

That is just one of the problems that I have with the scoring system. Personally I think unless you actually know the answer (very unlikely) or can tell the player is lying/telling the truth you are probably best off betting low every single time. The reason I say this is that you are risking a lot bidding high and you don’t get a lot in return. By bidding low you don’t lose much if you are wrong. If you bid high though you lose a lot of points and also give a lot of points to an opponent. If the player told a whopper or their own lie they will score even more points. If a player bets fifteen points that the Teller of Tales was telling the truth and they actually made up their own lie they would score 45 points while the betting player would lose 15 points. A 60 point swing from one question will make it very hard to catch up in the game.

Another problem with the game is just the fact that the game is kind of outdated at this point. That is not really the game’s fault, its’ just that some of the facts in the game feel dated and might not even be true at this point. While it is pretty hard to make a trivia game that won’t feel outdated at some point, I wish the game would have used more trivia that wasn’t as time sensitive. With the game being older than me, it is kind of hard to answer questions about insignificant facts from before my time.

As far as the components are concerned, B.S. The Game is kind of lacking. Basically you get six question booklets, scoresheets, and the answer cards. The answer cards are pretty thin cardboard and are pretty cheap overall. For some reason the scoresheets don’t actually contain enough spaces for all four rounds of the game forcing you to continue the score on the back of the sheet. While this doesn’t ruin the game it becomes kind of a nuisance. The one thing I do give the game credit for though is that the game comes with plenty of questions. Each booklet has 60 games. With six booklets you can play at least 60 games before you have to repeat any questions.

Should You Buy B.S. The Game?

I wouldn’t say that B.S. The Game is a terrible game but it has quite a few problems. Basically it is a bluffing trivia game. With how random the facts are and how the lies are regularly more convincing than the truth, it becomes a guessing game unless you can tell when the other players are lying. While I like that the game gives you some risk/reward options by telling bigger lies, it is just not enough to overcome the lack of actual gameplay mechanics. I think the best use for the game is to just read through the question booklets since some of the facts are actually quite interesting.

If you don’t really care for trivia or bluffing games I don’t think you will like B.S. The Game. If you like both genres the game might have some redeeming qualities for you. I would only recommend picking up the game though if you can find it for a couple dollars.

If you would like to purchase B.S. The Game you can find it online: Amazon