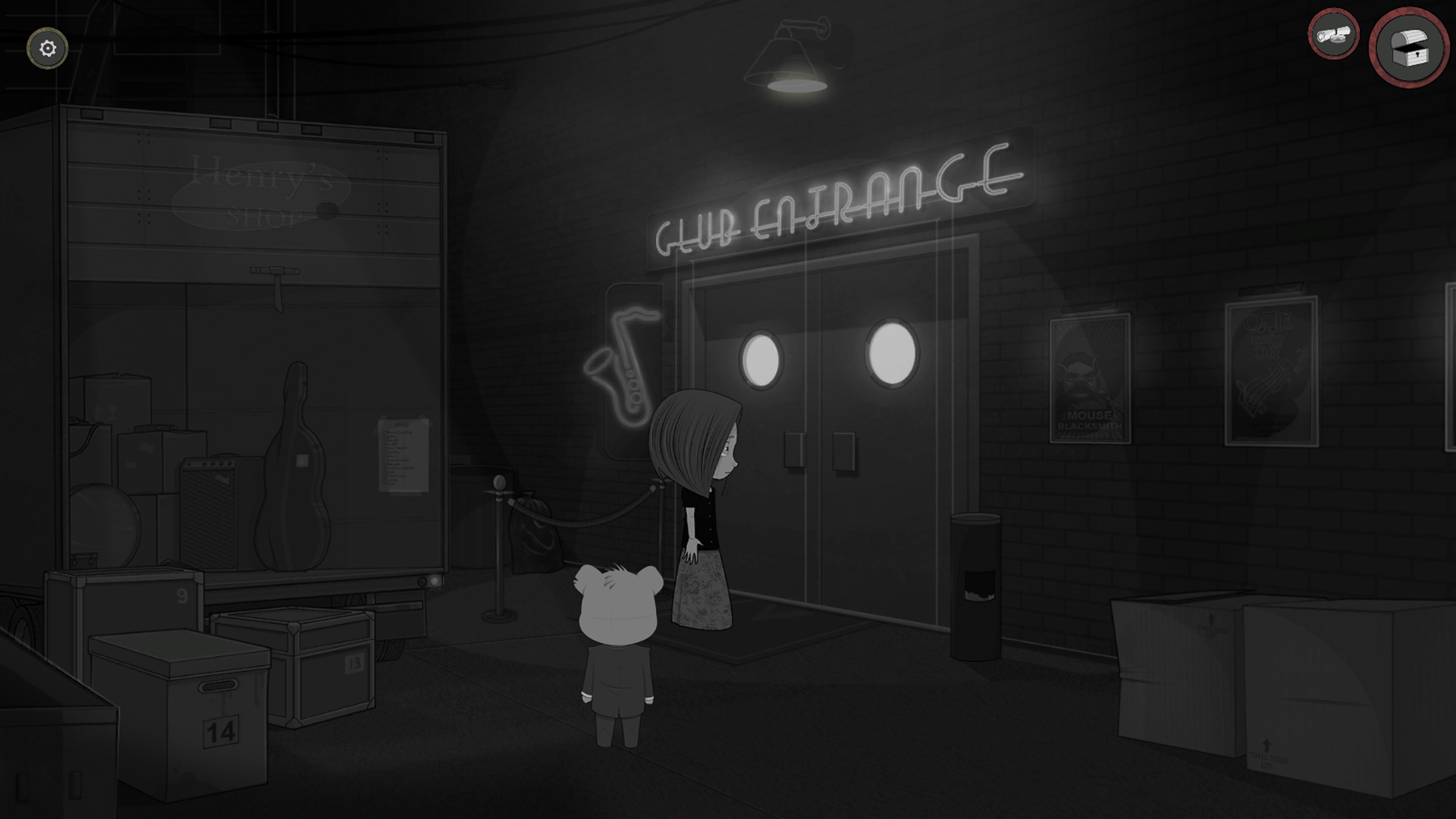 Back in August of last year I looked at the first episode of Bear With Me. While it wasn’t a perfect game, I was surprised by how much I enjoyed it. The game had an interesting story, great visuals/setting, and was surprisingly funny. Tomorrow the second episode of the story will be released. So does the second episode stand up to the quality of the first episode? The short answer is yes.

After finally making their way to Paper City at the end of first episode, episode two begins with Amber and Ted first arriving in the city. The pair has to explore various locations around town as they try to find out more about the “Red Man”, what is going on in Paper City, and what happened to Amber’s missing brother. In their journey they will encounter many new characters including some that may have nefarious intentions for our heroes. Will Amber and Ted uncover the Red Man’s goal or find Amber’s missing brother?

It shouldn’t come as much of a surprise but episode two of Bear With Me is very similar to the first episode. Since I have addressed my thoughts on the first episode in my previous review, I am not going to waste time rehashing those thoughts in this review. If you want to see my review for episode one, check it out here. Instead I want to spend this review talking about how the second episode differs from the first.

For the most part the gameplay is exactly the same in both episodes of the game. Bear With Me is your basic point and click adventure game where you move around the environment, pick up and use items, and talk with the characters in order to advance the story. If you have ever played a point and click adventure game before you know what to expect. The only significant difference in the gameplay is that since you are exploring a whole city you will be traveling to several different locations around the city (using a map) and thus will have to travel to and from locations as you get more clues and items. As a whole this makes the second episode feel a little less linear than the first episode since you are not just moving from room to room. The episode is still very linear though as it is usually pretty obvious where you have to go next at any given time. A point and click game by its’ very nature is really linear though so this is to be expected.

When I reviewed the first episode of Bear With Me, probably the biggest complaint I had was that it was kind of on the easy side for a point and click adventure game. I was hoping that the second episode of the game would be a little more challenging but it basically falls into the same level of difficulty as the first episode. This is not necessarily a bad thing as it is not frustratingly difficult but it also doesn’t provide much of a challenge to players. Outside of temporarily forgetting that you can combine items together, I don’t know if I was stumped by any of the puzzles in the episode. Maybe I just think like the developers but I found the puzzles to be very straightforward. If you care more about the story/humor than the gameplay this really isn’t much of a problem. If you are looking for a challenge though, you will probably be disappointed by Bear With Me – Episode Two.

As far as length, Bear With Me – Episode Two is comparable to the first episode. The first game took me around 2.5-3 hours to finish.  The second episode might be slightly longer since it was closer to the three hour mark. While I wish the episode was a little longer, with how fast I went through most of the puzzles this is a decent length. If you struggle with some of the puzzles you might get 3-4 hours out of the episode.

Basically Bear With Me – Episode Two is just more of the same. The gameplay is basically unchanged. The artwork/atmosphere is still great. The story in episode two is probably a little better than episode one but does not have as many laughs. The second episode is also a little on the easy and short side. Basically if you enjoyed the first episode of Bear With Me you should enjoy the second episode.