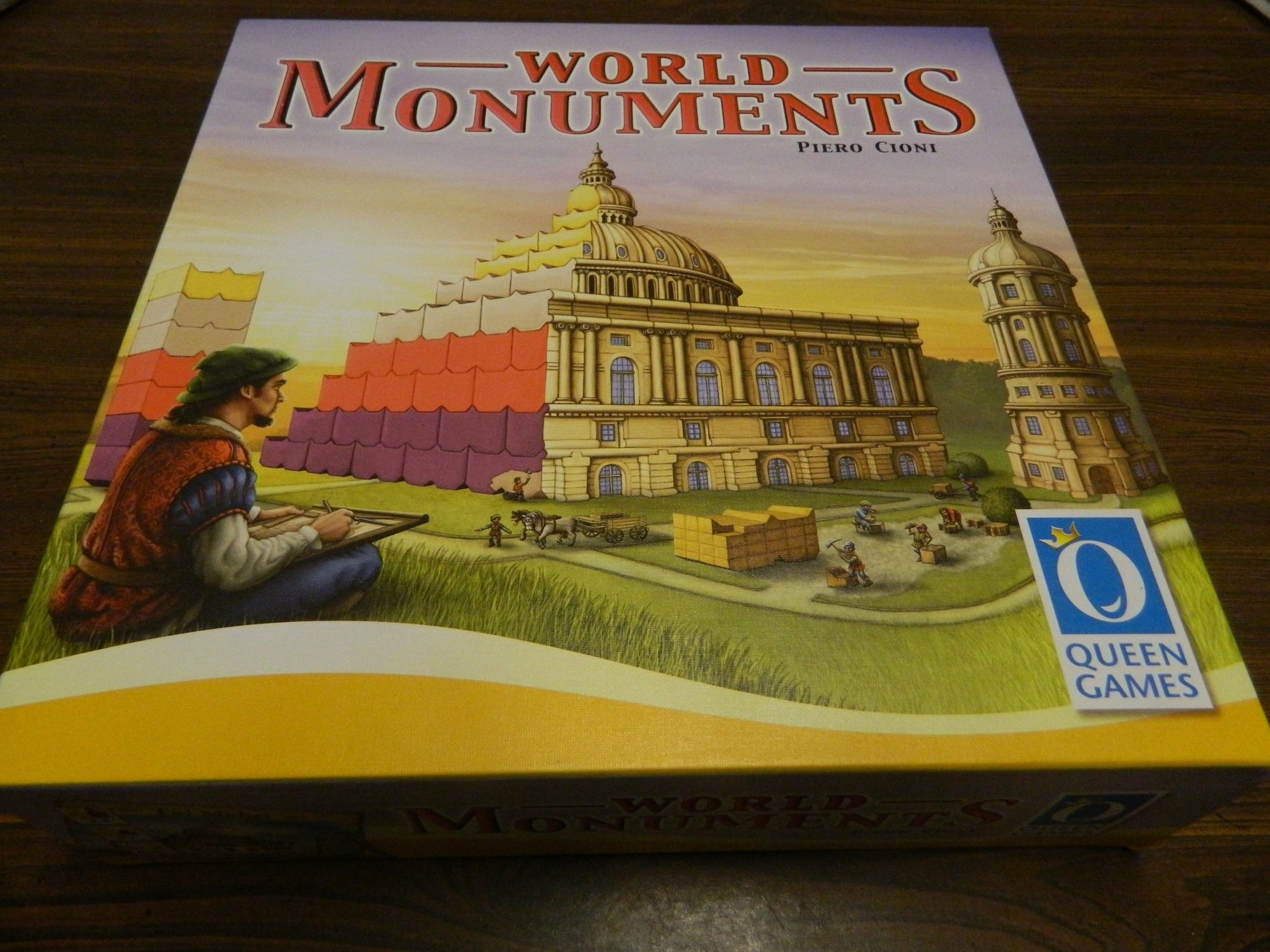 How to Play World Monuments

The players choose which monument they are going to build and places the corresponding board on the table. Place the quarry board next to it. Each player takes a screen and the scoring marker of the same color. All scoring markers are placed on the ten space of the score track. Players will choose which player will be the first player.

Beginning with the first player and continuing clockwise, players will move the worker token around the quarry in order to pick up blocks. Each space the worker moves to gives the player moving it one of the blocks on the space. If there are multiple blocks on the space the player gets to choose one of the blocks to take. Players can move around the quarry however they want but cannot move to the same space twice and they must end their turn on a space on the outer ring. At least one block must be taken during a player’s turn. All blocks taken during a player’s turn are hidden behind their screen.

When all of the blocks have been taken, the quarry phase ends.

Whichever player took the black block places it in the center of the table and takes the worker token making them the first player. This player also receives two points for the black block. The building phase for the current round then begins.

The first player will begin the building phase by playing one of their blocks to the monument board. When placing blocks on the board the colors must follow the pattern for the monument. The blocks printed on the board are for the first level of the monument with higher levels shown at the bottom of the board.

When placing blocks on the second or higher level, all required blocks must be placed below the block before it can be played.

After placing a block the player scores points for the block based on what level it was placed on.

If a player should score over 60 points they continue moving their piece around the scoring track and at the end of the game add an additional 60 points to the space their piece ends up on.

When a player is unable to legally add a block to the monument board, they must pass. When passing a player has to lift their shield to show their remaining blocks. The player receives one negative point for every block behind their screen that is not blue. Once a player has passed they are unable to play blocks even if later on they would be able to play a block.

Once every player has passed, the building phase ends. Players keep all of the blocks that are still behind their shield. The player with the worker token in front of them will start the next quarry phase.

World Monuments is played in three rounds with each round having a quarry phase and then a building phase. The game ends after the building phase of the third round or whenever the monument is fully constructed.

Players reveal their screens and score three points for each blue block they have. If the monument has been completed, players receive no negative points for any other colored blocks that they still have in front of them.

After adding in the points for blue blocks, the player with the most points wins the game. If there is a tie, all of the tied players share the victory.

My Thoughts on World Monuments

Like with a lot of games made by Queen Games, I would classify World Monuments as light to moderate on the strategy spectrum. The game has more to it then a game like Monopoly but it is also far from heavy strategy game where you have to think several moves ahead. I would say that it takes around 5-10 minutes to explain to new players. I actually think it would work well as a introductory game to the euro style of board games for people who don’t play a lot of board games.

So let’s begin with the first phase of the game which is the quarry phase. Basically in the quarry phase you acquire the blocks that you will use in the building phase. The mechanic is quite simple since all you do is move around the quarry board picking up a block from each space you pass through. As far as which blocks you should pick up, it depends on how you want to play the game. You could focus on picking up blocks used in the higher levels since they score more points. If you don’t pick up blocks for the lower levels though you may be forced to pass your turn ending your turn and receiving negative points. I think the more common strategy for choosing blocks is to try and get a large variety of blocks which gives you more variety while building.

While the two phases of the game are pretty straightforward, I found them to be pretty fun. There is just something fun about building up the monuments. While the final buildings are only abstract representation of the actual structure, it is fun building them up throughout the game. If you only like moderate to heavy strategy games, World Monuments might seem a little too simplistic for you. If you like light to moderate games though where you don’t have to put a ton of thought into your moves, I think you could really enjoy World Monuments.

While I think World Monuments is a good game, one thing that keeps it from being a great game is the feeling that your fate is out of your own hands at times. There is some strategy in the game but your fate in the game is more dependent on what other players do than what you choose to do. For a lot of your turns there will either be an obvious best move or there is only one choice for your move. At times it kind of feels like the game plays itself as a player’s choice is basically made for them.

This leads to turn order being crucial in the game. Turn order is going to determine the winner of most games of World Monuments. Since your fate depends on what the other players do, the order in which the players play will likely determine who wins and loses. You could end up losing a lot of points because another player plays the block you were planning on playing. You could also benefit off another player being forced to play a lower level and then you play on top of their block scoring more points than they did. Since this happens quite often in the game, these moves are going to determine who wins the game. Since you don’t have a lot of control over the game as a whole, you really can’t control the flow of the game so you either need to get lucky or be really good at predicting what the other players are going to do.

While this might just be the case in four player games, I really think the first player in a round is at a distinct disadvantage in each round. While going first in the building round could be powerful it could also be a hindrance. If the round begins with an opportunity to play a block in a valuable spot, it is good to be the first player to be able to take advantage of it. The problem is that most of the time the first player will end up having to play a block that another player will play on top of scoring more points. Playing first is even worse in the quarry phase since while you can basically choose whatever color block you want to start the phase, you are probably going to end up with the least amount of blocks since the other players will get to move over more spaces and thus should be able to take more blocks. While more blocks could lead to more negative points, in general it is probably better to get more blocks since each block you can play will give you points.

I have to give World Monuments credit for creating a close race until the very end. Throughout the game the lead player changes several times. At the end of a game that I played two players tied for the win while the other two players were within three or four points. Basically all of the players were within one or two plays of each other. While this was with a limited sample size, I really don’t see a player winning or losing by a lot of points unless they are really lucky/unlucky. I really like when a game is designed where all of the players remain in the game until the very end. It is boring playing a game where a player falls too far behind where they have no chance of winning or a player gets out to such a huge lead that it is a forgone conclusion that they will eventually win.

As far as components, World Monuments does a good job. While the blocks can occasionally fall when you are stacking them, they work well for the most part. I am also a sucker for wooden parts in a board game. The game’s artwork is really good. The cardboard pieces are also thick and sturdy. The only real complaint I have with the components is the fact that I wish the game came with more monument boards. The base game only comes with four monuments which is kind of disappointing. I think the game should have come with around eight monuments. While I don’t see a problem playing the same board more than once, I would have preferred more variety especially with the game originally retailing for $50. There is an expansion expected to come out in 2017 though so if you are interested in additional monuments it is something to look for in the future.

Should You Buy World Monuments?

As a whole World Monuments is a good but not great game. The game is quick and easy to play. World Monuments is a unique experience and it is hard to deny that it is fun building the monuments. The one problem that keeps it from being a great game though is the fact that it seems like your fate in the game is not always in your hands. Moves in the game seem to be predetermined at times and turn order really impacts the outcome of the game.

If you would like to purchase World Monuments you can find it online: Amazon