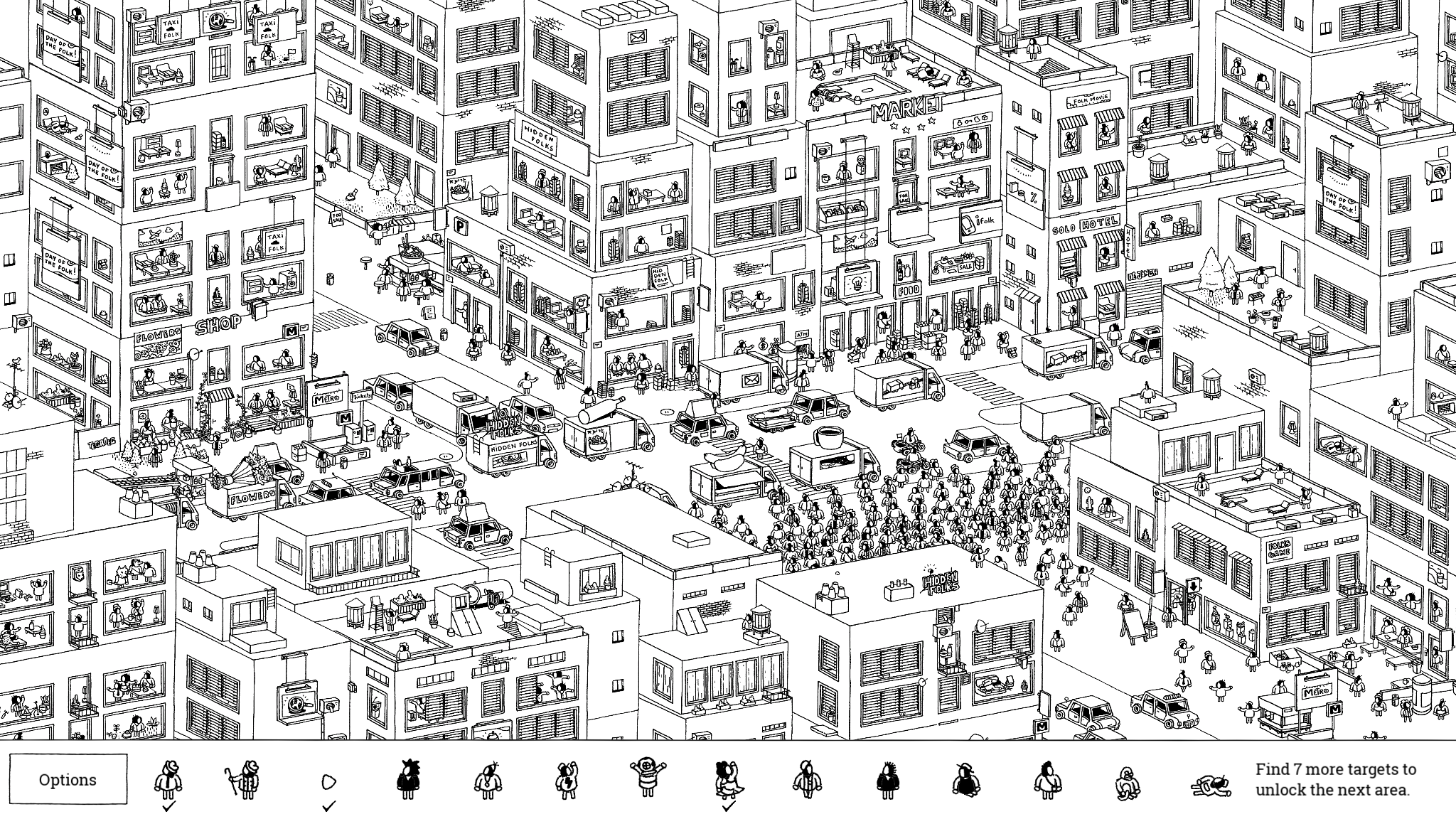 When I was young I really enjoyed the Where’s Waldo line of books. For those of you who aren’t familiar with Where’s Waldo it is basically a series of books where on each page there were a bunch of characters and objects and your objective was to find specific things hidden in the scene. While I haven’t looked at a Where’s Waldo book in many years, I have wondered why there really haven’t been many video games that have tried to emulate the Where’s Waldo formula. While there are hidden object games, those games ten to hide objects inside other objects or parts of the background. Where’s Waldo relied more on trying to find objects hidden in a huge group of objects. Well if you were looking for a good Where’s Waldo style game, I think I have found it and its’ name is Hidden Folks.

So the basic gameplay in Hidden Folks follows the exact same premise as Where’s Waldo. In each level you are given a group of things to find and in order to advance to the next level you need to find a minimum number of them. While most of the items are just sitting out there in the open the game is not easy. In most of the levels there are hundreds to thousands of items and a lot of the characters/items blend really well into the background. Hidden Folks also has a mechanic where you have to click or drag on certain objects in order to reveal one of the hidden folks.

Since it uses a game mechanic that was made popular by a children’s book most people probably wouldn’t think that Hidden Folks would be very difficult. In the small scenes I would probably agree. In these scenes there are not that many hiding places so by the process of elimination you can find the items pretty quickly. These smaller scenes appear to be designed as training levels though since they usually pop up when you switch to a new location and introduce new objects that you can interact with.

When you get to the larger levels I would say that the items tend to be in one of three difficulty levels. The first group of items are the items that are pretty easy to notice. These items aren’t so obvious that can find them without paying attention. If you take your time looking through the scene zoomed in though you should be able to find most of these items on your first time through the scene. I would say that these items make up about 50-60% of the items. In some levels there are enough of these items to advance to the next level and if not you probably only have to find one or two of the more difficult items.

The next group of items are the moderately difficult items. These are mostly the items that require you to click/drag on an object to reveal or are objects that really have any distinguishing features. To find most of these items you need to notice strange things in the scene which usually leads to finding these items. You can find a decent amount of these objects on your first time through a scene but the items usually take two or three times to find.

The final group of objects are the really hard to find objects. Most of the levels only have one or two of these type of objects. Most of these hard to find objects are really small objects or are objects that look similar to many other things on the screen. These objects can actually be really hard to find and can become a little frustrating at times. The good news is that you don’t need to find these objects in order to move onto the next level. They present quite a challenge to people that want to 100% the game though. While they can be frustrating at times, the good news is that Hidden Folks has a system in place to help you find an item that you can’t find.

The good thing about being an interactive game is that Hidden Folks has a help system which you really couldn’t have had in Where’s Waldo. If you ever have trouble finding an item, you can click on the item on the bottom of the screen in order to get a hint to its’ location. In most cases the clue is quite helpful. The hints don’t tell you exactly where an item is but they usually guide you to the correct part of the level. I really like the hint system since the clues are helpful but not too helpful. While a couple of the clues could have been a little more helpful, the clues prevent Hidden Folks from becoming a frustrating experience for people who want to 100% the game.

One topic that I don’t usually address in video game reviews is audio/music. Being far from an audio expert, I usually don’t have much to say about the audio in games. I have to make an exception for Hidden Folks though. One of the unique elements of Hidden Folks is the fact that all of the sound effects in the game where produced by the developers voices. You might think that sounds a little cheesy but I would counter that it really adds to the game’s charm.

Since I really enjoyed Hidden Folks it was hard to find a lot of complaints for the game. The only potential issue I had with the game was that I wish it was longer. The game only has 15 levels and around 120 things to find between the levels. Depending on how quickly you can find the items you most likely will finish the game in 4-7 hours. If you don’t care about finding all of the objects I would guess that it would take 2-4 hours. While Hidden Folks is not super short, I would have liked a little more content for the game. While you likely won’t remember where all of the objects are located in a level, I don’t know how fun it would be trying to find the exact same objects again. I kind of wish that the game had several sets of objects to find in each level so you could replay a level and try to look for new objects. The game’s official website does hint at some additional content being added at a future date and I look forward to checking it out.

Overall I enjoyed my time with Hidden Folks. Basically the game feels like an interactive version of Where’s Waldo with added depth. While the gameplay might not be highly original, it is really fun. The game have a good mixture of easy to find and hard to find objects. If you don’t want to be frustrated just look for the easier objects but if you want a challenge you can try to 100% the levels. The one area where Hidden Folks improves on Where’s Waldo is the fact that you occasionally have to perform actions in order to uncover some of the objects. The artwork and audio are also really charming. While I wish Hidden Folks was a little longer, I enjoyed it while it lasted.

If you don’t really like hidden object/Where’s Waldo type games, you probably won’t like Hidden Folks. If the idea of an interactive Where’s Waldo game intrigues you though I think you will really enjoy Hidden Folks.