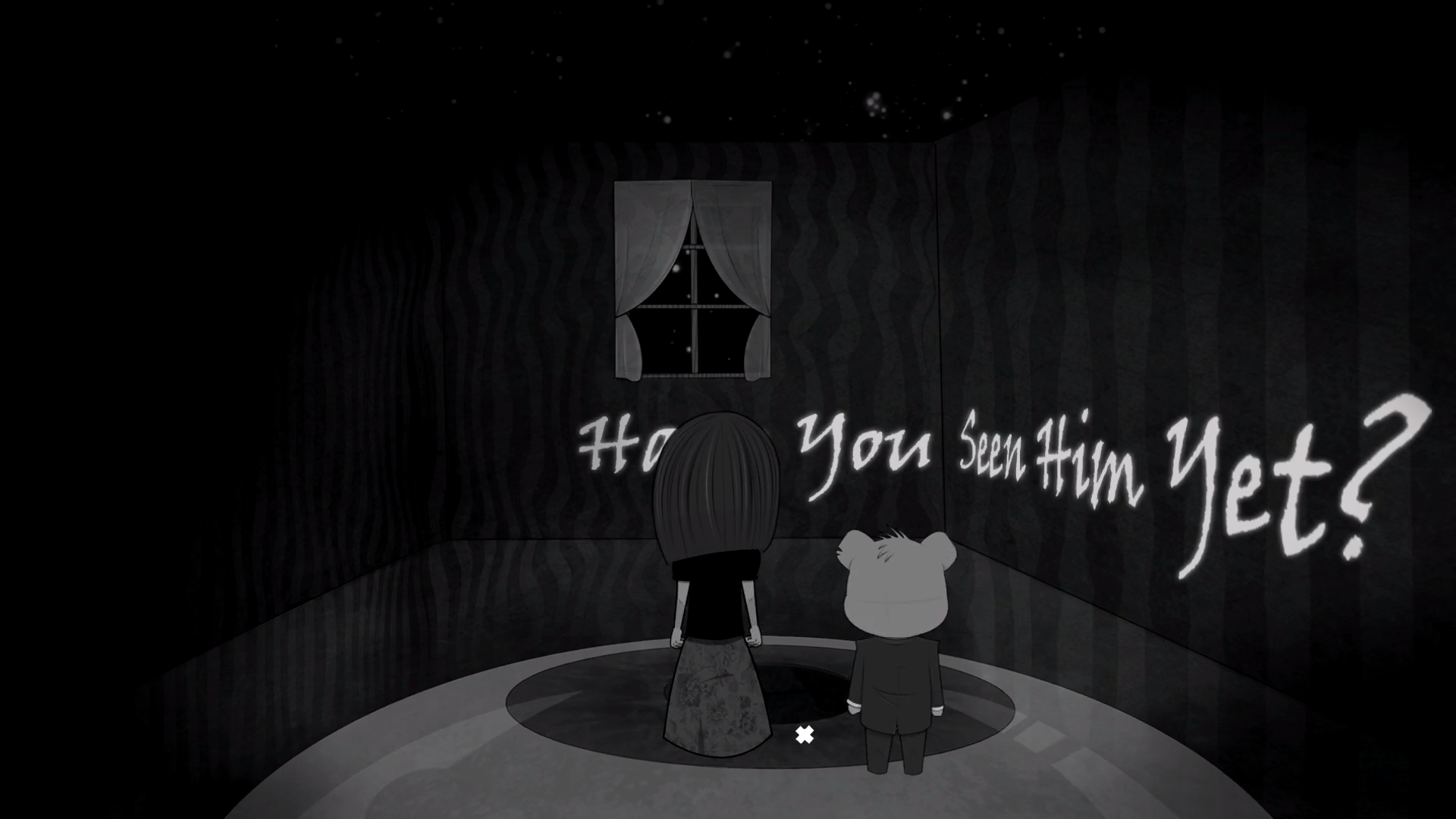 Bear With Me follows the adventures of Amber and Ted E. Bear. Amber wakes up in the middle of the night to discover that her brother has gone missing. She recruits the help of her trusted teddy bear, former detective Ted E. Bear. In addition to her brother having gone missing, Paper City is in chaos as a mysterious entity known as the Red Man is terrorizing the city and appears very interested in Amber. Can Amber and Ted E. Bear find Amber’s brother and stop the Red Man?

The first thing that stands out about Bear With Me is the game’s world/atmosphere. I would say that the game has a strong noir feel. The game has a dark feel to it accentuated by the black and white art style. At first I actually thought the game was going to be kind of scary. While the Red Man is kind of creepy, the first chapter of the game is not scary which is a good thing since I am a coward when it comes to horror games.

What is unique about the atmosphere is that while it is dark, it is kind of lighthearted at the same time. The game blends a dark noir setting with the imagination of a young girl. For example all of the characters are based off Amber’s toys. The story feels like a dark twist on a world that a child would make up. At this point it is too early to tell if this is just a child’s imagination or whether it is a weird alternate dimension and I like that ambiguity. The story as a whole shows a lot of promise.

On top of an interesting atmosphere the characters are actually interesting. Amber is interesting in that at times she can be be a naive child but at other times can get kind of dark as well. Ted E. Bear is an interesting take on the detective with a dark past that gets called out of retirement. The supporting characters aren’t as good but are still interesting enough not to drag down the story.

The thing that actually surprised me most about the game is that the game is surprisingly funny. While everyone might not find the game to be particularly funny, I laughed a lot more than I was expecting. This was mostly due to the witty dialog from clicking on different objects around the house. The dialog for the most part was funny enough that I felt the need to click on every object just to hear what the characters would say. I found the dialog to be quite clever and brings a lighter tone to a story that actually could have been on the darker side.

While I was pleasantly surprised by Bear With Me, the game is not perfect. The biggest issue I had with the game is that it just isn’t particularly challenging at this point. The puzzles are really straight forward and don’t require a lot of puzzle solving. The only challenge in the game comes from finding the objects in the environment that you need for the puzzles. I only got stuck once in the game and that is because I didn’t see a key hanging in the background that I needed to proceed. Otherwise I blew through the puzzles.

Now this is not necessarily a terrible thing. Unlike with some point and click games where you just have to click everywhere and try every combination of items, you can work out what you need to do in Bear With Me without just guessing. It just means that you aren’t going to be really challenged solving the puzzles. The reason for playing the game at this point is more for experiencing the story than the actual gameplay. If you are looking for a challenging puzzle game Bear With Me is not going to be it.

The other issue I have with the game has to do with it being a chapter based game. The first chapter is not particularly long and ends kind of abruptly just as the story is picking up. This is typical for a chapter based game though. The first chapter took me three hours to complete but I probably spent at least 45 minutes looking for the key I mentioned above. If you don’t have one of those moments where you just can’t find an item I would guess that the game would take closer to two to two and a half hours to complete. If you rush through the story and don’t bother clicking on all of the different objects in the house it could even take less than two hours. Basically the first chapter of the game is a game you can finish in a night if you want to.

At this point I would say that the first chapter of Bear With Me is a good start for the game. The story, atmosphere and characters are quite good and show a lot of promise for future chapters. I also found the game to be surprisingly funny. If you like the idea of a noir style game blended with children’s imagination, I think you should find the game to be interesting. The first chapter is a little on the short side though and does end kind of abruptly. The game could also be a little more challenging. While not perfect I look forward to the next chapter of Bear With Me.

Bear With Me Chapter One