While I have never reviewed it on Geeky Hobbies, I have always enjoyed Balderdash (aka Dictionary). While it isn’t a perfect game, I have never had a bad game of Balderdash. For those of you unfamiliar with Balderdash, it is a party game that features obscure words that few people actually know the definitions too. Thus Balderdash has players make up their own definitions hoping to trick other players into picking the definition that they made up. What I like about Balderdash is that it is a simple and yet entertaining party game that everyone can enjoy. So does Balderdash Junior remain fun while making itself accessible for younger children? Unfortunately Balderdash Junior changes too many mechanics which ruins what I love about Balderdash, creating ridiculous definitions that other players might still believe.

How to Play Balderdash Junior

Place the gameboard in the center of the table. Shuffle the two decks of cards and place them to the side of the gameboard. Players choose which side of the Balderdash cards they want to use (purple-beginner, red-advanced). Each player chooses a playing piece and a voting chip. Each players’ playing piece is placed on the start space. The players roll the die to determine the first player.

Each player begins their turn by drawing a card based on what space their playing piece is on at the beginning of their turn. 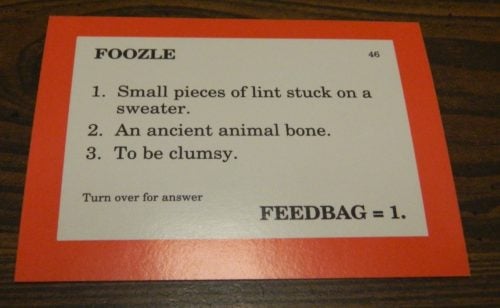 If a player is on a normal space they read the word and the three definitions on the chosen side (purple or red) of the next card. One of the three definitions will be the correct definition for the word. All players (including the current player) get to decide which definition they think is correct. Players indicate their choice by placing their voting chip on the corresponding number on the gameboard. When everyone has voted the answer is revealed. Each player that chose the correct answer rolls the die and moves their playing piece the corresponding number of spaces. 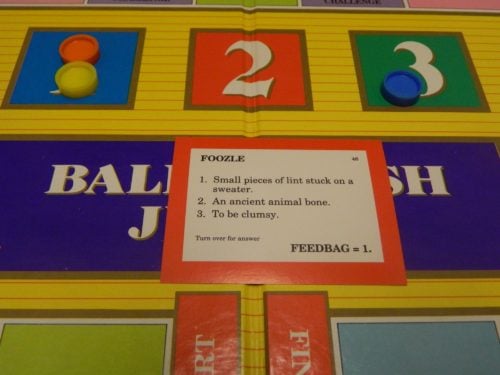 The answer to this question is #3 to be clumsy. Since blue chose the correct answer they will roll the die and move the corresponding number of spaces. 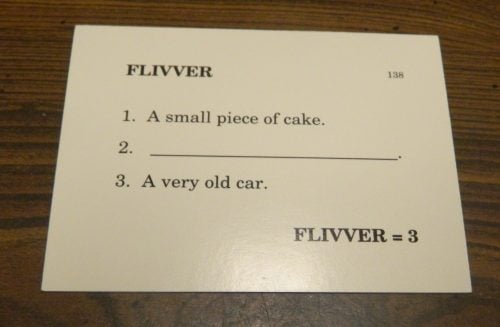 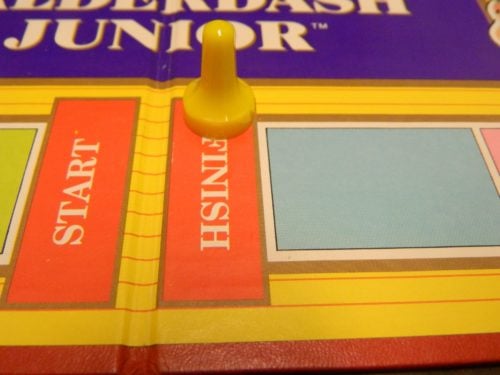 The yellow player has reached the finish line and has won the game.

My Thoughts on Balderdash Junior

So you are probably wondering why I bought a junior/children’s version of Balderdash when I don’t have any children to play the game with. The main reason I picked up Balderdash Junior is that I really like Balderdash and I thought I could use Balderdash Junior as an expansion pack for the original Balderdash. I assumed that the cards for Balderdash Junior would just feature easier words (due to being the junior version) which might make the game easier but wouldn’t affect the game in any other noticeable way. It also didn’t hurt that I found Balderdash Junior for around $0.30.

The one thing that makes Balderdash truly interesting is the idea that each player makes up their own definitions for the words hoping to trick the other players into guessing their definition. While you may occasionally get stuck trying to come up with a compelling definition, it is a good game mechanic and makes for a good party game.

Outside of the challenge cards, this mechanic is entirely stripped out of Balderdash Junior. Instead of coming up with your own definitions, all of the definition choices are printed on the cards and players just need to choose which one they think is correct. This basically turns Balderdash Junior into a game of guess the definition. I am guessing that the designers felt this decision had to be made because younger children have trouble coming up with their own compelling definitions. The designers must have thought it would be easier to just let them try and guess the correct definition. This is probably true but it kind of makes the game boring for older children and adults.

The one time where creativity comes into play is with the challenge cards. Unfortunately the challenge cards are pretty disappointing. First they don’t really come into play very often. I think in the game I played maybe two players were able to use a challenge card. Second while the reader is able to make up one definition, it is just not the same as letting all of the players come up with their own definitions.

As far as difficulty I would say that Balderdash Junior is more difficult than I was expecting but can still be quite easy. While I hadn’t heard of most of the words on the cards we played, I was familiar with a couple of the words. The main reason why Balderdash Junior is easy is because of how the answers are chosen. Most of Balderdash Junior’s answers are definitions from similar sounding words which are trying to trick you into picking them. These definitions are rarely ever correct. If you can figure out what similar word an answer is referring to, you can usually eliminate that answer. This isn’t applicable for every card but you can eliminate one or two definitions from quite a few of the cards.

This leads to one of the problems that I have with Balderdash Junior which is that games can easily end in ties. Players stick pretty close to one another for most of the game and I bet a lot of games will end with the tiebreaker. I think this comes down to a lot of the players getting the same cards correct. While the roll of the die adds a little variability to movement, since the die only has numbers 1-3 on it most players will move the same number of spaces on their turns.

With the changes to the gameplay I really can’t recommend Balderdash Junior for adults or older children since the original game is just a superior game. If you are  looking for a definition trivia game, you might like Balderdash Junior but otherwise I don’t think you will get a lot of enjoyment out of the game. While I would like to recommend picking up the game for the extra cards, I can’t really do that either. While the words on the cards would work fine for a game of Balderdash, you will have to ignore the definitions already written on the card. At that point you might be better off randomly picking words from the dictionary.

Should You Buy Balderdash Junior?

If you would like to purchase Balderdash Junior you can find it online: Amazon

Fake News or Not? Board Game Review and Rules
Click here to cancel reply.