In 1981 the trivia game giant Trivial Pursuit was first released. Shortly after launch it became the most popular trivia game in history. Since 1981 so many different versions of the game have been created covering pretty much every topic that you could imagine. Being a fan of trivia games I have mixed feeling about Trivial Pursuit. The two main problems that I have with the original Trivial Pursuit are that the questions are too hard because they force you to answer questions about categories you know nothing about and the game drags on for far too long. Trivial Pursuit Party tries to address these issues and while it is not a perfect trivia game, it actually does a pretty job fixing both of these problems.

How to Play Trivial Pursuit Party

Each player/team chooses a playing piece and places it on the center of the gameboard. Shuffle the cards and place them into the cardholder. Choose the starting player/team by whatever method you choose.

Players begin their turn by rolling the die and moving the corresponding number of spaces in any direction they choose. The player will then take a card and answer a question based on what type of space they landed on. 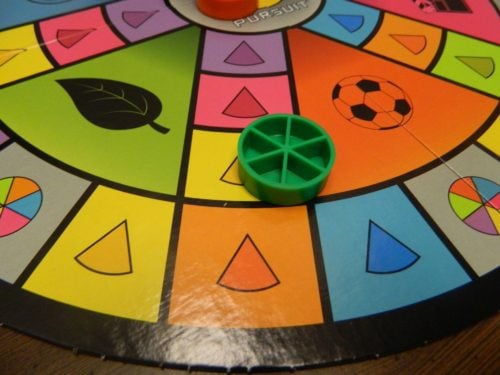 If a player lands on a single colored space, the player will have to answer the question related to that color. The player reads the question out loud. If the player thinks they know the answer, they can answer immediately. If they need some help though they can ask another player for help.  There are three possible outcomes based on whether the player got the question right:

After finishing the question play moves to the next player. 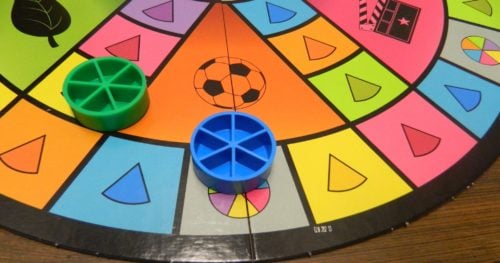 Scattered throughout the board are spaces that feature wedges of all of the different colors. These are wild spaces. The current player gets to choose the category for their question (the category has to be chosen before looking at the card). The player reads the question out loud and while deliberating all of the other players can buzz in by yelling out “Got It”. The current player will be the first player to answer. If they are correct they take a wedge and their turn ends.

If the current player guessed incorrectly, the first player to yell “Got It” gets to answer the question. If they are correct they get to take a wedge. If they are incorrect though they have to give up one of their wedges they earned on a previous question.

The first player to get six wedges wins the game. 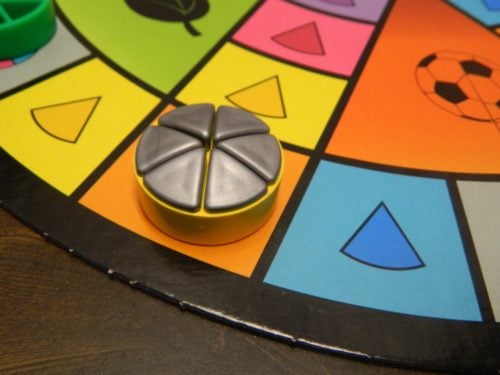 The yellow player has acquired six wedges and has won the game.

My Thoughts on Trivial Pursuit Party

The main thing that I think really helps streamline the game is the fact that you don’t have to get one question right from every category in order to win the game. Possibly the most frustrating part of Trivial Pursuit is when you are within one or two wedges from winning the game and then you just can’t get the last two wedges. It is difficult just landing on the space that would let you answer a question from the category that you need. You can waste several rounds just trying to land on the category you need. In between you land on spaces where the only benefit of getting the question right is being able to move again. When you land on the needed category you have to answer it correctly or you are back to hoping to land on the category again.

This leads to easily the best addition to Trivial Pursuit Party in my opinion. Trivial Pursuit Party doesn’t require you to get one question right from every category. If you know nothing about a particular category you can still win the game by answering questions from other categories. No longer do you need to answer a question from that annoying art category that would otherwise take you 20 attempts to get. While the roll of the dice will still impact which categories you can choose from, you can tailor the game more to the topics you know the best instead of hoping to luck into a question you know from a category you know little about.

Other than streamlining the original game, Trivial Pursuit Party also adds an ask a friend mechanic. I actually really like the idea behind the mechanic since it actually adds a little strategy to the game and offers help when you get a question you don’t know the answer to. The player can get help with a question and the helper gets the same reward so they have an incentive to help out. This leads to some strategy since while you might need help with a question, you might need to avoid asking for help from players who are ahead of you.

While I like the ask a friend mechanic, the one issue with it is that it doesn’t live up to its’ potential based on how short the game is. Since you only need to get six questions right to win the game, giving help to just a couple players will get you close to winning the game. The help mechanic can also turn into an unfair catch up mechanic or can let a player help another player win the game. If one player gets out to an early lead, one player could catch up easily by helping a couple other players since those players won’t ask the player in first for help. If a player is far behind they could also decide to ask for help from a player that is close to winning the game to get them closer to winning the game.

The final new mechanic that Trivial Pursuit Party adds is the “Got It” mechanic. Basically if you know the answer to another player’s question you can call out “got it” which will allow you to answer the question if the current player gets it wrong. For the most part I think this is a good mechanic. I like that it lets players answer questions that they know the answer to that other players end up getting wrong. I also like the fact that if you get it wrong you lose a wedge so you better be sure you know the correct answer before saying that you “got it”. My only real complaint with the mechanic is that it rarely comes into play since the current player gets most of the questions correct that other players call “got it” on.

As far as the components go, you pretty much get what you would expect from a Trivial Pursuit game. The components are pretty nice but are far from flashy. The only real issue I had with them is that I wish the game included more question cards. The game only has 200 question cards which is on the lower side for a trivia game. There are six questions per card which helps but if players regularly choose the same categories you could run into repeats quicker than you would think.

Should You Buy Trivial Pursuit Party?

I liked a lot of the things that Trivial Pursuit Party did to try and improve on the original Trivial Pursuit. I like that the game was sped up from an hour plus game into a 20-30 minute game. I like the idea that you can try to get correct answers from the categories of your choice instead of having to get one question right from every category. I even liked the ask a friend and got it mechanics. Trivial Pursuit Party is better than normal Trivial Pursuit in every way except for the fact that the game is too easy. Some of that is because you can keep answering questions from the categories that you know best but the questions in general just seem to be easier.

If you would like to purchase Trivial Pursuit Party, you can purchase it on Amazon