When I was a child I owned a copy of the board game Topple. I remember playing the game but I honestly couldn’t tell you anything about how the game was played as it never left much of an impression. Having no memory of how the game was played, I always assumed that Topple was just another dexterity game where you place pieces onto the board and tried to avoid tipping over the board. After so many years I decided to give Topple another try. I have to admit that I was surprised to find out that there was more to Topple than just another generic dexterity game as it also includes a abstract strategy style mechanic. Topple has some interesting ideas for a dexterity game that could have led to a good game except that some issues with the scoring leads to the game being kind of boring.

How to Play Topple 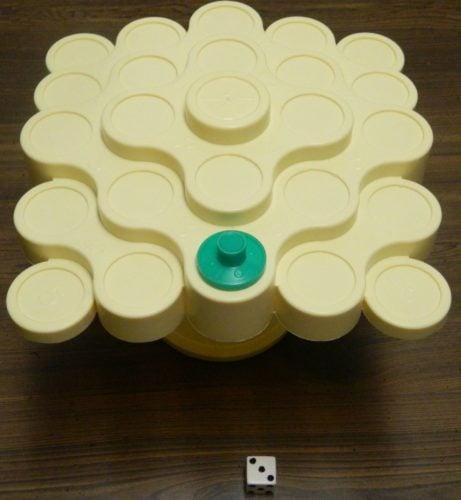 This player rolled a three so they placed their piece on one of the three spaces.

If a player rolls a six they can choose to place their piece on any space on the gameboard. 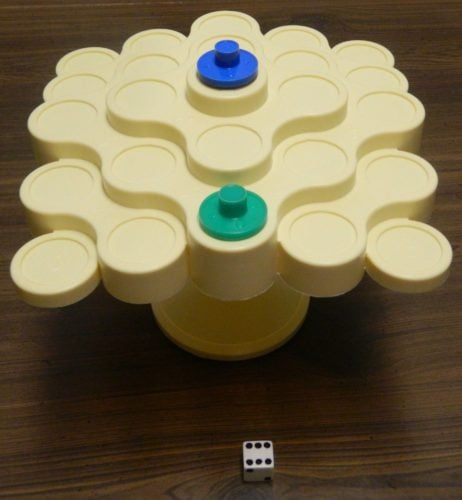 The blue player rolled a six so they could have placed their piece on any space.

Once a player has played their piece, the next player clockwise takes their turn.

Players can score points in a couple different ways after placing one of their pieces.

The green player has completed this row. They will score three points for completing the row and another point for having the top piece in a stack other than the piece they just placed.

If a player places one of their pieces on top of one of the stacks in an already completed row, the player scores one point for each stack that their color piece is on top.

If a player places a piece on top of a stack that already has three or more pieces, the player scores one point for each of their colored pieces in the stack. 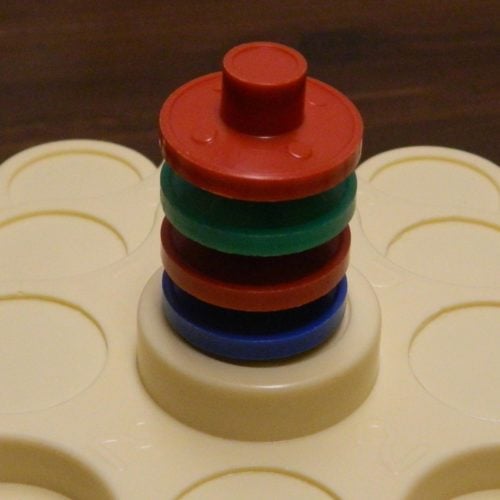 When placing a piece the player can score multiple times. The player will score points for all of the different ways that they scored. 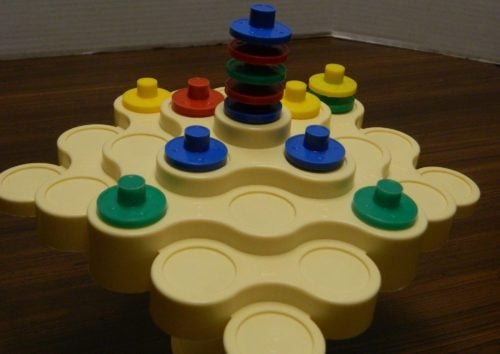 When a player places a pieces that knocks one or more pieces off the gameboard, the round ends immediately. The player that toppled the gameboard loses ten points. The player to their right scores three points. 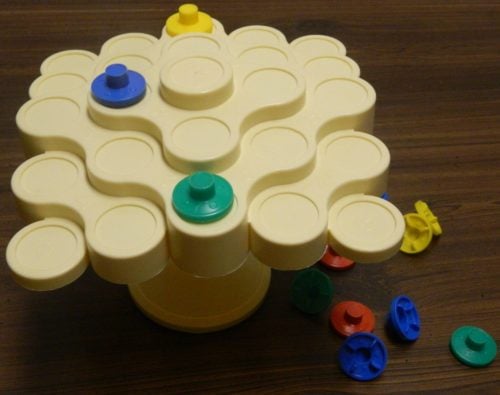 The current player has toppled the board. They will lose ten points. The player to their right will score three points.

If none of the players have reached the agreed upon number of points, another round is played.

The game ends when at the end of a round one or more players have reached the agreed upon number of points. Whoever has the most points wins the game.

My Thoughts on Topple

On the dexterity front I would say Topple’s difficulty somewhat depends on the number of players. With more players the game naturally becomes more challenging as the gameboard eventually has to support more pieces. Even with the maximum of four players, unless one of the players is careless when placing a piece you should be able to place most of your pieces before you are in any danger of knocking over the board. When most of the pieces are on the board it starts becoming a little more unstable but if you pay attention to how the board is tilting you should still be able to avoid tipping over the board. Generally I would say that Topple is on the easy to moderate side of the difficulty curve. While it is not that difficult to keep the gameboard upright, I do like that you aren’t eliminated from the game when you knock it over. You do lose quite a few points though so you want to avoid it if possible.

While the dexterity mechanics are basically what I expected, I was surprised by the addition of an abstract strategy style mechanic. Basically in addition to not tipping over the gameboard you need to try to score as many points as possible when you place your pieces on the gameboard. You can score points in three different ways in Topple with the possibility of scoring multiple ways later in a round. Most of your points in the game will be scored by completing a row or adding another piece to a row. You can also score points by adding pieces to a stack that already has three or more pieces in it.

At first I really liked this idea as it seemed to add something unique to a dexterity game. Instead of just placing pieces trying to avoid toppling the gameboard, there is a a mechanic where you place pieces to try and score as many points as possible. This mechanic kind of plays like Tic-Tac-Toe/Connect Four except that you can still score if other players’ colors are in the row you complete. The strategy is usually pretty obvious as there is usually a spot on most turns that will score you more points than the other spots. You should usually just place your piece on those spots unless it is situated where it might tip over the gameboard.

I really like the underlying concept behind the scoring in Topple but it has some unintended consequences which is why I think it needs to be tweaked. In the early game you are generally going to score the most points if you are the first player to complete a row as you get the three bonus points. If you ever have the opportunity in the early game to complete a row you probably should. The problem is that to complete a row you need to receive help from the other players. If you play the second to last piece to complete a row, you just opened it up for another player to complete the row before you are given the opportunity. This dissuades players from adding pieces to new rows. Players tend to stick to rows that have already been completed, adding another piece and collecting a few easy points. This leads to the stacks on the first completed row getting tall pretty quickly. I wish the game would reward players more for going out and completing new rows because with the official scoring system players generally just stick to safe plays that get them a couple points each round.

As the round progresses the scoring opportunities branch out a little as players are forced to play pieces on spaces not currently part of a row. Eventually this will lead to spaces on the board where two or more rows intersect allowing players to score in two or more ways. As these spots become valuable players will regularly fight for them placing a piece on them whenever possible. When these multiple score opportunities show up, you have to be really careful while calculating scores to make sure that you count all of the different ways that the player scored.

When it comes to placing pieces there are things that I like and dislike about a die determining where you have to place your piece. The one benefit for forcing players to place a piece on the space that they rolled is that it significantly reduces the amount of analysis paralysis in the game. If players could place a piece on any space on the gameboard, towards the end of a round I could see players taking a long time figuring out which space would score them the most points. Unless you roll a six you will only be able to choose from between one and eight spaces. This reduces your number of choices significantly which ultimately speeds up the game.

The problem with using the die though is that it adds a lot of luck to the game while reducing a lot of the potential strategy. What move you can make on any given turn is determined by the number you roll on a die. You could have found a move that would score you a lot of points but you can only make it if you roll the right number. This hurts the game’s strategy as the player with the best strategy will not necessarily win the game. The player who rolls the right numbers at the right times while making solid moves is likely going to win. This puts Topple into the category of games that have some strategy but also rely on quite a bit of luck.

Topple’s component quality is going to somewhat depend on which version of the game you are looking at as the game has had several different versions made through the years. For this review I used the 1985 version of the game. For the most part I would say that the components are pretty sturdy but are really bland. If you are really rough with the pieces they may not last but if you take care of the pieces they should last. Basically the components serve their purpose but are nothing special.

Should You Buy Topple?

Before playing Topple I thought it was going to be another very generic dexterity game where players tried to avoid knocking over the gameboard. While Topple does have a dexterity mechanic similar to most dexterity games, there is actually quite a bit more to the game as well. Topple also includes an abstract style mechanic where players score points based on where they place their pieces. I actually thought this was a really clever idea as it adds another dimension to your typical dexterity game. The problem with the scoring is that it tends to lead players to score the same row over and over again as players keep adding pieces to the same stacks. The game also limits where you can place pieces based on a die roll which adds luck while reducing the potential strategy. Basically Topple has some good ideas that could have made for a good dexterity game but it doesn’t live up to its potential. What you are left with is a completely solid but unspectacular dexterity game.

If you don’t really care for dexterity or abstract games I don’t really see anything for you in Topple. If the idea of adding abstract strategy mechanics to a dexterity game sounds interesting, I think you can have some fun with Topple. I would probably recommend coming up with some house rules though and would probably only pick up the game if you can find it for cheap.

If you would like to purchase Topple you can find it online: Amazon, eBay