Back in the 1980s the Pressman Toy Corporation launched the Think Series. The Think Series was a line of abstract strategy games and puzzles that were focused more on the gameplay than their visual appeal. While I have acquired quite a bit of the Think Series over the years through rummage sales and thrift stores I had yet to play any of them. Well today I am going to start my look at the series withDevil’s Triangle. At first glance Devil’s Triangle looks like your typical abstract strategy game but you quickly realize that the game has some serious issues.

How to Play Devil’s Triangle

On a player’s turn they will pick up one of their triangles from the gameboard and move it to any other open space on the gameboard. A player can choose to move any triangle that has at least one side that doesn’t have a triangle next to it. 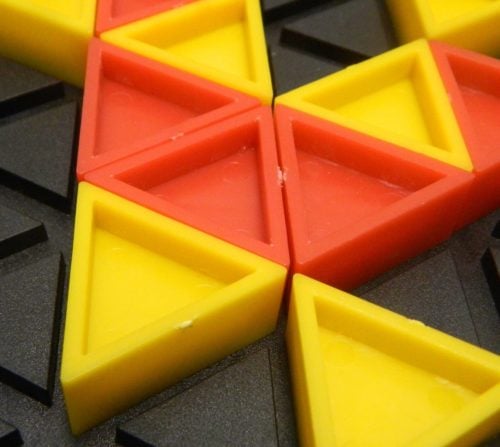 The red triangle that is surrounded by triangles can’t move until one of the triangles surrounding it are moved. 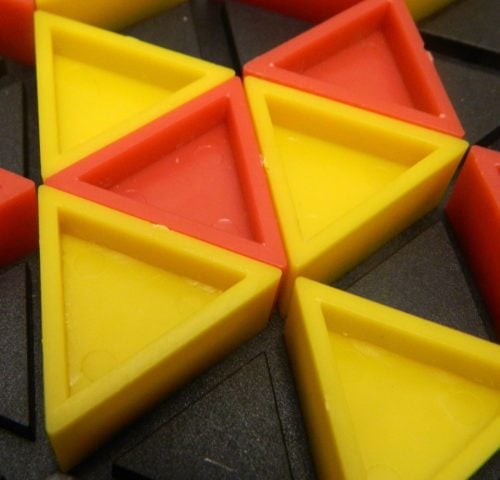 This red triangle has been surrounded by yellow triangles so it has been captured.

Once a player has moved one of their triangles the other player takes their turn.

If a player captures the other player’s devil triangle, they automatically lose the game. 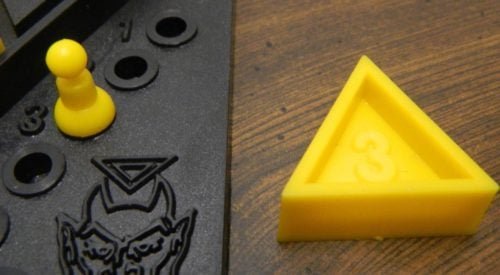 Otherwise the first player to capture three of the other player’s triangles wins the game.

The red player has captured three triangles so they have won the game.

My Thoughts on Devil’s Triangle

When I review games I like to talk about both the positives and negatives. When it comes to Devil’s Triangle though it is not quite so easy as to be honest there aren’t a lot of positives to take from the game. Basically the only positives I can come up with for the game is that it is quick and easy to pick up and play. The game is really straightforward where you can teach it to a new player within just a couple minutes. The game is also quite short at only five to ten minutes.

The problem with Devil’s Triangle is that it feels like it was never fully play tested. I can see what the designers were trying to do but it doesn’t work properly. The main gameplay mechanic feels broken. Basically players take turns moving their triangles around the board trying to capture the other player’s triangles. Players are trying to move their triangles to a position which will surround one of the other player’s triangles. At first this seemed like a decent mechanic as it is similar to a lot of other abstract games. It actually sounded like it could have made for a good game.

The problem is that in execution it doesn’t work. I think the main reason why it doesn’t work is that there are few restrictions on movement. You can move any triangle that has at least one free side to any empty space on the board. This allows you to move almost any triangle to anywhere on the board. This leads to problems as it makes it quite hard to capture the other player’s triangles. When you put a triangle in position to capture another player’s piece they will just move that triangle to another spot on the board. This back and forth continues throughout the game. Basically the only way to ever capture one of the other player’s pieces is to take advantage when they make a mistake. Thus the first player to make three mistakes will lose the game.

This problem is not helped by the fact that the first player seems to have a pretty big advantage in the game. I think the first player has an advantage since they will get the first move after all of the pieces have been placed. This gives them a good chance of finding a way to capture one of the other player’s triangles. Since they then have a one triangle advantage it gives them an advantage in capturing triangles on future turns. The other player is also likely forced into playing defensively which leads to the problem of players constantly moving their triangles out of harm’s way.

While I wouldn’t consider myself to be a huge abstract strategy game fan, these issues lead to Devil’s Triangle being a boring game. I think this is the biggest problem with the game. Devil’s Triangle is just not a very fun game. You basically do the same things over and over again until someone ultimately wins. Usually these type of abstract games overcome the somewhat dull gameplay with strong strategic gameplay where you can outsmart the other player. For the most part is just seems like in the Devil’s Triangle you have to rely on the other player messing up. That doesn’t make for a compelling board game.

On the component front the game is the definition of solid but unspectacular. The components for the most part are pretty durable as they are made of pretty thick plastic. They aren’t much to look at though as they are quite bland. I also don’t know if this was just a problem with the copy I found but it had two of the same numbered triangle for one of the colors. I am guessing that this was just an uncommon error but it did impact what numbers we could choose for the devil’s triangle.

Should You Buy Devil’s Triangle?

Before playing the Devil’s Triangle I had some hope for the game. I didn’t think it was going to be fantastic but I thought it would be a decent abstract strategy game. After playing Devil’s Triangle I have to admit that the game feels like a broken mess. While the game is easy to learn and quick to play, there really aren’t any other positives for the game. The main gameplay mechanic leads to players running away when someone gets close to capturing one of their pieces. This leads to only being able to capture another player’s triangles when they make a mistake. Then you add in the devil’s triangle mechanic which solely adds luck to the game. What you are left with is a boring game that you can argue is broken.

Unless you love abstract strategy games I would recommend staying far away from the Devil’s Triangle. Even if you like abstract games I still likely would not recommend Devil’s Triangle. The game has too many problems to recommend playing it under its official rules. With some extensive house rules though you may be able to salvage the game. For this reason though I would only recommend picking it up if you don’t mind tinkering with the rules and find the game for really cheap.

If you would like to purchase the Devil’s Triangle you can find it online: Amazon

Blu-ray and DVD Releases for June 9, 2015 (Highlights and Complete List)