Separate the chip chart cards from the other cards and deal one to each player. Shuffle the rest of the cards and deal them out to players based on how many players are playing the game.

Cards are kept in a player’s hand so other players can’t see them. The rest of the cards form the draw pile. Each player is given one chip to start the game. All of the players roll one die and whoever rolls highest gets to go first.

A player starts their turn by either using their chips to purchase a special action or by playing one of their cards and hoping to complete it. Each card has several icons on it that indicate different elements of the card’s challenge: 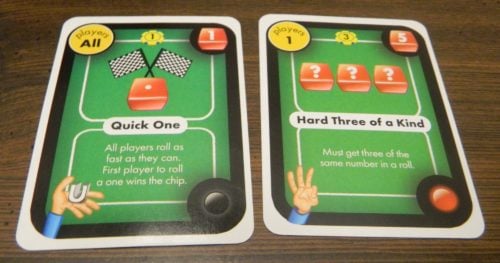 The player(s) then attempt the challenge. If the current player is successful they get to discard the challenge face up next to the draw pile and they take the number of chips indicated on the card. If the current player did not complete the challenge, they take the card back into their hand unless they use chips to purchase additional rolls. After the player has finished or failed the challenge they can choose to cash in chips to take an action. If the player chooses not to take another action, play passes to the next player. 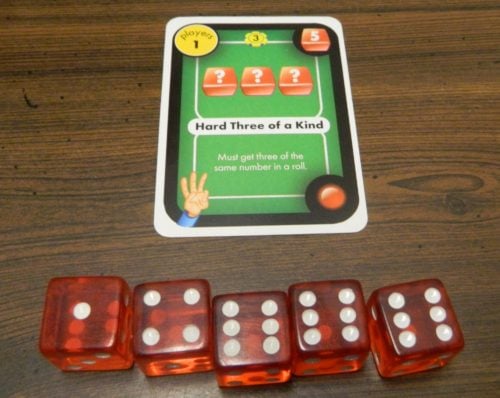 This player has completed the challenge and receives three chips. The player then discards this card.

Some additional rules regarding challenges:

Players can use the chips they acquire during the game in order to take special actions. These actions and the associated amount of chips are as follows: 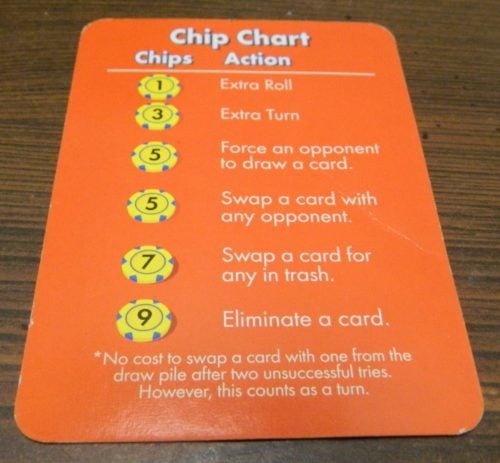 Dice games have been around for a long time with the most popular probably being Yahtzee. With dice games being so easy to make (all you need is some dice), there have been so many different dice games made over the years. Some of these games are good but many are not that great. The problem with most dice games is that they mostly follow the formula created by Yahtzee which prevents many of these games from being great. With so many dice games being clones of each other, I am sometimes hesitant about trying new dice games unless they do something new.

I will admit that Combo Kings initially looked like a very generic dice game. It does share a lot in common with games like Yahtzee. You basically roll dice trying to get different combinations of numbers. The game relies heavily on luck like all dice games. Whoever rolls the best will win the game. No strategy will overcome poor dice rolling. If you despise games like this Combo Kings is not going to change your mind. Combo Kings does some interesting things though that make it stand out among most dice games.

I think the most interesting addition to the game is the idea of the chips. Chips in a dice game is not a highly original idea but how they are used is a nice twist for the traditional dice game. The chips essentially let players buy special powers/actions that will help them in the game. Didn’t roll what you needed? Spend a chip to re-roll your last roll. Want to get ahead of the other players? Buy another turn. The ability to choose which actions you want to use your chips on adds a little strategy to a genre that rarely has any. Do you want to be aggressive with your chips and buy a lot of actions early or do you want to save up your chips to buy some of the more powerful abilities? The chips let players have some impact on the game other than rolling well/poorly.

While the chips add some strategy to the game and give players a way to correct poor rolls, they also kind of reinforce the luck element of the game. Generally the luckiest players will also have the most chips which will let them take additional actions. This can lead to a runaway leader situation where one player uses their success to get even further ahead. It is actually theoretically possible to win the game on your very first turn (very hard but possible). Even though it adds some of its own luck to the game, I still liked this addition to the game.

The other somewhat new mechanic added to the game is the different challenge cards that players have to complete. While the game has a lot of your traditional challenges (rolling several of a certain number, etc.), some of the challenges are pretty interesting. Some of these challenges are things I don’t think I have seen in other games. The problem is that a lot of cards are very similar with only slight differences. Some of these cards also require you to do quite a bit of counting of pips (dots on the dice). Finally I wish there were more challenges for multiple players since it seems like a majority of the cards are single player challenges.

While the challenge cards are an interesting addition, they seem to add luck to the game. What cards you end up drawing seem to have a big impact on how well you do in the game. The cards are not all equal. Some of the cards are considerably harder to complete than others. The game tries to offset this by giving you more chips for completing more difficult challenges but it doesn’t always even out. If you get a lot of difficult cards you likely aren’t going to win the game. Also while the all play challenges are some of the more enjoyable challenges, they aren’t particularly fair for the player who plays them since the other players could finish the challenge and end up getting chips on a turn that wasn’t even theirs.

Another problem with the cards is that I just don’t think you get enough of them at the beginning of the game. Four or five cards are not enough in my opinion. With that few of cards the game moves really quickly. With the game being quick it just means luck will have an even bigger impact on the final outcome. With only four or five cards it actually isn’t that hard to win the game in two or three turns. I personally would recommend starting with at least six cards since the game lasts longer which gives players some time to actually use their chips to impact the game.

Overall I would say the game’s contents are pretty good. The game includes quality dice which are also pretty big. The chips are solid and not cheap plastic like those a lot of games would use. The cards are designed well and make it easy to find the information you need. The artwork also looks pretty nice.

Combo King is your typical dice game that actually adds some interesting mechanics that make it stand out from a lot of dice games. I really like the idea of getting chips that you can use to purchase different actions. This gives you some actual choices to make in the game and gives you a chance to implement a little strategy. I liked the idea behind a lot of the challenge cards since some of the challenges are original and pretty fun. The problem is that they also add quite a bit of luck. Basically Combo King is like most dice games in that the luckiest player will win the game. The player who rolls the best and gets the easiest challenge cards to complete will likely win the game unless the other players gang up on them.

If games that are highly driven by luck are not your type of game or you hate dice games in general, Combo King is probably not going to be for you. I actually found Combo King to be better than a lot of dice games though because of the chips and challenge card mechanics. If you like dice games I think you will enjoy Combo King.