How to Play The Legend of Landlock

A player begins their turn by drawing a tile. The player will then play the tile face up next to the tiles already played. For the first tile the player will just play it in the middle of the table. All of the other tiles must be played where water touches water and land touches land. 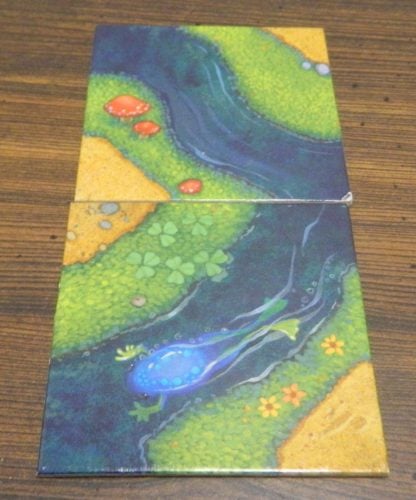 These two tiles can be played next to one another because land touches land and water touches water.

When placing tiles you will be forming a 6 x 6 square. Once six tiles have been played in one of the directions, you cannot add anymore tiles in that direction.

When a player draws a bridge tile they will choose one of the tiles already on the board and replace it with the bridge tile. Bridge tiles can be used to prevent islands and ponds from being formed or to extend a water or land path. The tile that was removed then has to be played by the other player. Bridge tiles cannot be used to replace Tussocks, individual gnome tiles, or a tile on the edge of the gameboard. 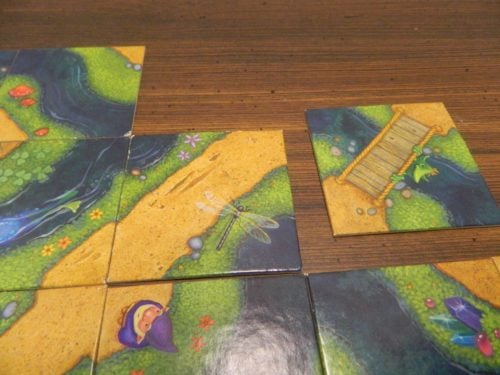 This player has decided to place the bridge tile to replace the tile that it is next to. That tile is removed from the board and the other player will place it somewhere else on the board on their next turn.

In The Legend of Landlock there are a couple different ways to score.

During the game players are going to try and interfere with one another. The land player is going to try and create ponds by completely surrounding water with paths or Tussock tiles. The water player is trying to create islands by surrounding a path with water or Tussock tiles. Incomplete islands or ponds that touch the edges of the board do not count.For each pond at the end of the game the land player will receive four points. For each island at the end of the game the water player will receive four points. 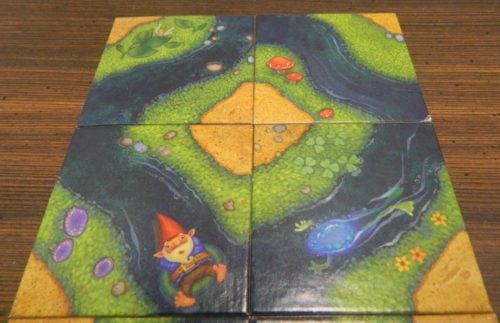 The stream player has currently created an island. The island will be worth four points to the water player unless a bridge tile is played to make it no longer an island.

Some of the tiles in the game feature a gnome in one of the corners. Players can score points if they play two or more gnomes next to one another so they face each other. Gnomes only count if they are of the same color. The player who controls the gnomes (land or water) will score one point for each gnome that is played next to one another. 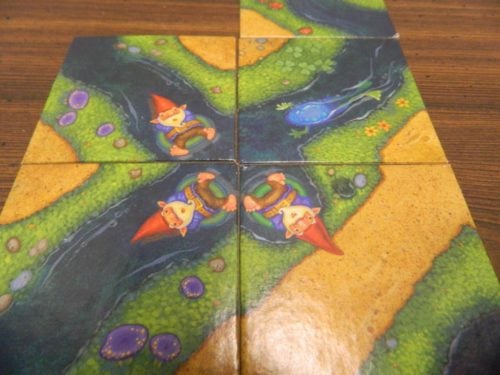 There are three gnomes next to one another so they will be worth three points for the water player.

When a player plays a Tussock (a tile with a large creature in the middle), the player will score one point for playing the tile. Tussocks can be used to create islands and ponds. 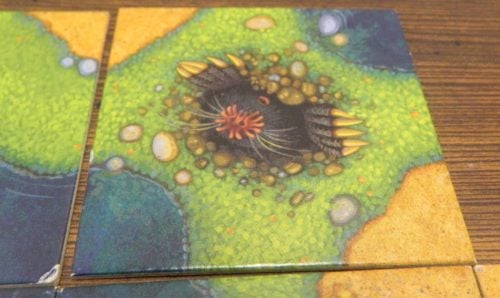 One of the players has played a tussock tile so they will automatically score a point. 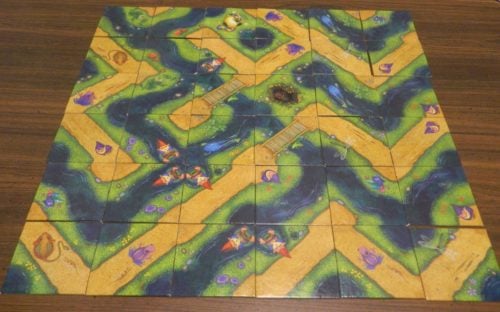 My Thoughts The Legend of Landlock

If you have ever played a tile laying game before you should already have a pretty good idea of how The Legend of Landlock plays. Basically players take turns drawing tiles and then adding them to the board. The only rule when placing tiles is that water has to be placed next to water and land has to be placed next to land. The players can score points by placing their own gnomes next to one another, creating ponds/islands, and forming a continuous path that touches the edges of the board.

The simple placement rules illustrate that The Legend of Landlock is on the simpler side of the tile laying genre. That is to be expected as the game was made as more of a family game. The game has a recommended age of 8+ but I think children a little younger shouldn’t have too much trouble with the game. Younger children might not really see all of the strategic possibilities but the rules for placing tiles are simple enough that it shouldn’t really cause any trouble. The game could also work for people that have never really played a tile laying game before. Players who have played other tile laying games though might wish for a few more mechanics as the game is a little on the simple side.

With the gameplay being pretty straightforward it is not surprising that the game is short. Your first game may take a little longer as the players get used to the game but I see most games only taking around 15-20 minutes. While most tile laying games are pretty short I would say The Legend of Landlock is shorter than most. I think this is mostly because there are less things you have to consider before playing a tile which really cuts down on the analysis paralysis problems of some tile laying games. At only 15-20 minutes I think The Legend of Landlock could work well as a filler game.

Strategy wise I would say the game is on the lighter end of the spectrum. In general the game gives players quite a few options. While you have to play the tile that you draw you have a lot of different ways that you can play it since the only rule is that water and paths have to touch one another. The reason I would say the strategy is pretty light though is the fact that the best move is often really obvious or it doesn’t really matter where you place a tile. The best spot to place a tile is usually pretty obvious because it will either really help you or hurt your opponent. If the tile can’t be used in either way though it usually doesn’t really matter where you play it as it won’t really impact the game.

While I wouldn’t say that luck plays a huge role in the outcome of the game, it does have an impact. The biggest impact luck has on the game is who is able to draw the tiles they need at the right times in the game. If you really need a certain tile to extend your stream/path it really helps if you are able to draw the tile you need. If you don’t draw the right tile the other player might be able to mess with your strategy. While a significantly better player could overcome bad luck, if the two players are equally skilled the luckier player will likely win the game.

I don’t know if this should be considered a positive or a negative but I see a lot of games of The Legend of Landlock ending with both players scoring basically the same number of points. In general I really like games that keep all of the players in the game until the very end. Games usually aren’t that fun when it is a forgone conclusion who will ultimately win the game. I would guess most games of The Legend of Landlock will end with one player winning by only a couple points. This normally would be a good thing but it becomes a problem because I see most games ending in a tie. The occasional tie is fine but ties are generally pretty anticlimactic so it is not something I would want to see happen a lot. I see the potential for a lot of ties in The Legend of Landlock because of a couple factors.

Other than the points for connecting all four edges, the next best way to score points is by creating an island/pond. The problem here is that it is really hard to create an island/pond. Unless a player is not paying attention or can’t draw any of the tiles they want, they should be able to prevent the other player from scoring points in this manner. There are also bridges that can fix this problem if an island or pond is created. I can see most games ending with neither player scoring points for a pond or island.

At this point both players will have scored basically the same number of points. Generally the tiebreaker comes down to who draws the most Tussock tiles as each one drawn scores a player one point. Maybe it is just me but I find it a little unsatisfying that a player can win the game because they were able to draw more of the tiles that automatically score the player a point. While the ending will probably be close it is kind of unsatisfying as the players will either tie or one player will win because they were luckier than the other player. With tile laying games I generally prefer when players have more impact in the actual outcome of the game.

Being a children’s game with a fantasy theme I was expecting the components for The Legend of Landlock to be pretty good. Basically the game comes with cardboard tiles. The cardboard tiles are sturdy and should last through a lot of games before wearing out. The best part of the components though is the artwork. The artwork is quite cute and well done. I would say The Legend of Landlock’s theme is pretty light but the artwork does a good job taking you to a fantasy world.

Should You Buy The Legend of Landlock?

Overall I would say The Legend of Landlock is a solid little tile laying game. The game is made more for families with younger children but I still had some fun with it. The game is simpler than most games from the genre which leads to the game being pretty short. Being simpler does lead the game to relying less on strategy and more on luck. I like that The Legend of Landlock is close until the very end but in some ways it is too close. I see a lot of games ending in ties or one of the players winning by a couple points because they were luckier than the other player.

If you would like to purchase The Legend of Landlock you can find it online: Amazon