To start the game assemble the gameboard and give each player a set of dice of the same color. Both players roll one dice. Whoever rolls highest gets to go first.

In Tumblin-Dice Jr players take turns using one of the dice. Players can roll, flick, toss, slide or do anything they want with their dice but it must touch the disc at the top of the board. 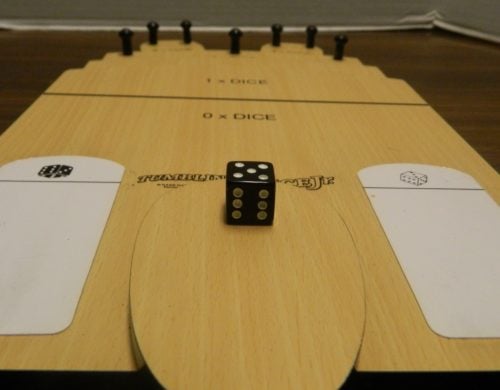 The black dice is on the top disc. For a dice to count it must touch the top disc during the roll, flip, slide, toss, etc.

Players are trying to get their dice into a scoring zone. If the dice does not make it past the first black line or it falls off the gameboard, the dice is removed from the gameboard area since it will not score any points. When sliding dice players can accidentally or purposely hit their own or another player’s dice to push into into a zone to score more points or knock a dice off the gameboard.

Once each player has used all four of their dice the round ends. Players will now score points based on their dice that are still on the gameboard. Each player scores points based on the side of the dice that is face up multiplied by the zone that the dice ended up in. For example if a dice landed in the X3 zone and a five was face up the player would score 15 points (5X3). 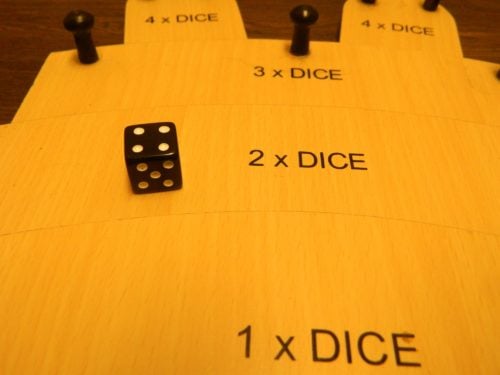 The black player would score eight points (4X2) for this dice if it remains in its current position at the end of the round.

Each player records their score for the round and they retrieve all of their dice for the next round. The player who currently has the most points (between all rounds played) starts the next round. 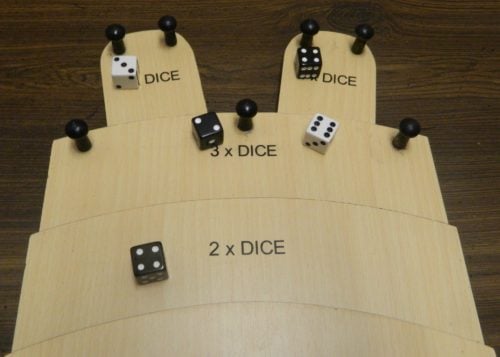 In the basic rules the players will play four rounds. The player who has scored the most points wins the game. If the players are tied another round is played to determine who wins.

Being a board game collector, I love shopping for board games at thrift stores and garage sales. While a lot of games that you find at thrift stores and garage sales are terrible or average at best you will occasionally run into a gem that makes it worth looking through all of those terrible games. One day I found Tumblin-Dice Jr at a thrift store and I almost passed up on it since the box looks like just another bland dice rolling game. Even though it was only a couple dollars I mostly picked up the game because I remember reading about how surprisingly rare/valuable the original Tumblin-Dice is. I have to say that I am glad that I took a chance on Tumblin-Dice Jr since it is one of the best dexterity games that I have played in a long time.

Basically Tumblin-Dice Jr./Tumblin-Dice are what you would get if you mixed shuffleboard with dice rolling. Essentially you roll/slide dice down the gameboard hoping to get them to land in valuable spaces on the board. Like shuffleboard though you can try to knock other player’s dice off the gameboard. With the game being so simplistic you wouldn’t think the game would be that enjoyable. Tumblin-Dice can be surprisingly addicting at times though. Unless you absolutely despise dexterity games I can’t imagine you not having fun with Tumblin-Dice.

In addition to being a blast to play Tumblin-Dice Jr is so simple to play. As long as you are at least somewhat familiar with how shuffleboard works, Tumblin-Dice takes just minutes to learn. This is mostly due to there being so few rules in the game. In addition to being quick to learn, the game is really quick to play. If you play by the rule where you play four rounds the game takes around five minutes to play. You likely aren’t going to want to just play one game though. You could easily play five or more games in a sitting. I don’t see you wanting to play the game for hours at a time though mostly due to how short each game is. This is the main reason why I would say that Tumblin-Dice Jr is the perfect filler game.

Other than not wanting to play more than five or six games at a time, the other main reason you aren’t going to want to play a ton of games in a row is that you can get quite good at the game if you play a lot of games at a time. The more you play the game the better you get at positioning dice on the board. Around my fourth or fifth game I was able to consistently get dice into the X4 sections of the board on any roll that I was trying to. When you get a hang of how hard to roll/slide the dice it becomes pretty easy to position the dice how you want. This leads to more strategy as you try to line up your dice to protect each other, but it also gets a little boring if you can constantly get the dice where you want them.

One problem that a lot of people have with dexterity games is that they usually rely on quite a bit of luck. I would say that Tumblin-Dice Jr has a moderate amount of luck. I actually don’t think throwing/rolling the dice has as much luck as you would think. The more you play the game the better you can get at placing the dice. Most of the luck comes from which side of the dice falls face up. As far as I can tell you can’t really control this part of the game. Unless your dice stays on the top step of the board, the dice will never stay on the face that you start the dice on. You usually have to just luck into it falling with a high number face up. This means that there is really no strategy to which side you start the dice face up on. While skill in throwing the dice can help, a lucky player can beat a more skilled player just by having the dice fall their way. I am usually not a big fan of luck but it isn’t a big issue in Tumblin-Dice Jr. since each game is so short that you don’t really care if one player gets luckier than the other.

Before wrapping up this review I want to address possibly the biggest “problem” with the game. Tumblin-Dice appears to not have sold very well and thus has actually become pretty rare. The game usually sells for around $100 on Amazon. That is a lot to spend on a board game that is mostly just a board and some dice. Tumblin-Dice Jr./Tumblin-Dice is a great game. If you like dexterity games you will probably really enjoy Tumblin-Dice but I don’t know if you can justify the cost.

Tumblin-Dice Jr is the perfect example of not always judging a board game by its’ box. Just by looking at the box you would think that Tumblin-Dice Jr looks like your typical generic dice rolling game. Tumblin-Dice Jr is much better than that though since it is one of the best dexterity games that I have played in a while. The game is so easy to learn, short to play and addicting that I would find it hard for someone not to enjoy the game. Unless you absolutely hate dexterity games I don’t see you not having some fun with the game. Tumblin-Dice Jr is not the type of game that you will play for hours at a time but it is a game that you will regularly bring out to play a couple games every now and then.