Originally created back in 1960, the board game Lie Detector was a game before its time in the deduction genre. Players would learn information about the culprit of a crime by inserting various witness cards into the lie detector machine. They would then use the machine to determine whether a witness was lying or telling the truth. Whether the witness was telling the truth or lying would give you information about the suspect. While we haven’t reviewed Lie Detector here on Geeky Hobbies we have looked at its’ spinoff Spy Detector which is basically the exact same game with a different theme. I bring this up because while I am not positive I think today’s game Lie Detector The Crime Solving Card Game is the spiritual successor to the original Lie Detector. Lie Detector The Crime Solving Card Game has some interesting ideas for a deduction game but due to the reliance on luck it ends up being a pretty average card game.

How to Play Lie Detector The Crime Solving Card Game

A player’s turn consists of the following steps:

A player begins their turn by either taking the top two cards from the draw pile or the top card from the discard pile. 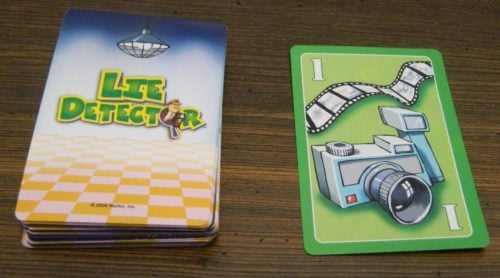 This player can either draw the one green card or the top two cards from the draw pile.

If a player has a command card in their hand that they would like to play, they can play it and take the appropriate action. A player is only able to play one command card each turn. See the special cards section for more information on the specific command cards. 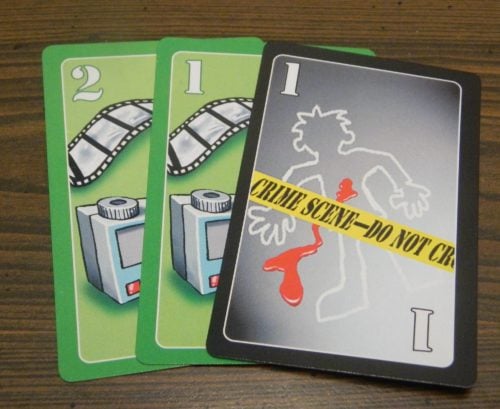 This player has created a green meld worth four points as the black card acts as a wild.

If the total equals or exceeds the number on the interrogation room you can look at the other side of the witness marker. The other side of the witness marker will give you a clue to the culprit which allows you to eliminate half of your remaining suspects. When looking at the clue make sure the other player can’t see. After you look at the clue return it to the interrogation room one number lower than it was previously on. You then discard one of the melds you used in order to look at the clue.

This player has created three green melds worth a total of 16 points. As the player only needs 14 to see the clue in the green interrogation room they look at the clue and find out that the culprit has a moustache. 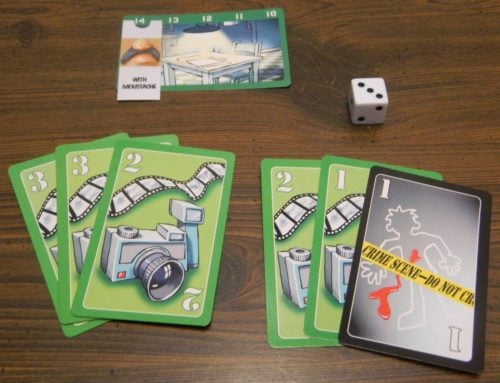 This player has formed two melds worth 12 points. In order to see the clue the player needed a total of 14 or more so they decide to roll the die. They rolled a three so their total was higher than 14 and they get to see the clue.

At the end of the player’s turn they must discard one of their cards face up on the discard pile. If a command card is discarded, the player does not get to use the card’s special ability. 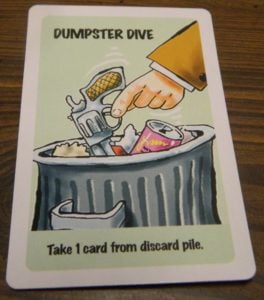 Dumpster Dive: Take any one card from the discard pile. 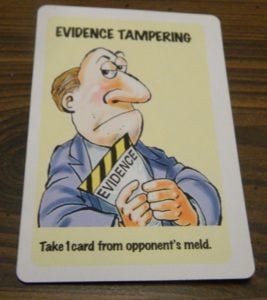 Evidence Tampering: Take a card from one of the melds played by your opponent. Your opponent returns the other two cards from the meld to their hand. 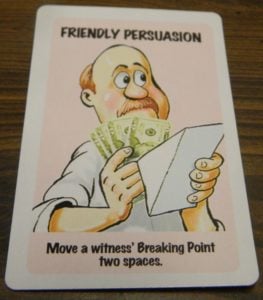 Friendly Persuasion: Move one of the witness markers up to two spaces in either direction. 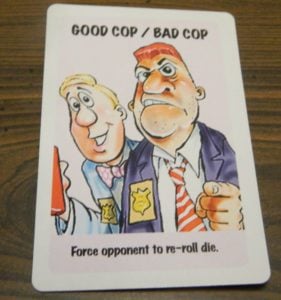 Special wild cards can either be played as a wild or for the action printed on the card. A player can play as many special wild cards as they want on their turn for their action as long as they have at least one card left to discard at the end of their turn. 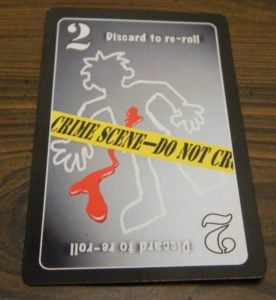 Discard to Re-Roll: You can play the card to re-roll the die if you don’t roll the number you need. 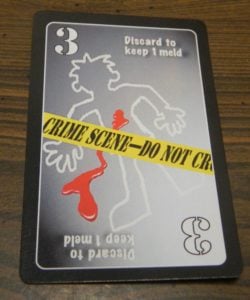 Discard to Keep 1 Meld: Instead of having to discard a meld after looking or attempting to look at a clue, you can discard this card.

If a player thinks they know who the culprit is (after they just looked at a clue) they can make an accusation. The player points at the suspect that they think is guilty from the wanted poster. All of the witness markers are flipped over to reveal the four clues. If the four clues match the suspect that the player accused, the player has correctly found the culprit and has won the game. If the player guessed incorrectly, the other player automatically wins the game.

The culprit in this game has blonde hair, glasses, a moustache and brown eyes. These characteristics match the car salesman.

My Thoughts on Lie Detector The Crime Solving Card Game

When you first look at Lie Detector The Crime Solving Card Game the first thing that likely will come to your mind is that it looks like a short simple deduction card game. That is exactly what I thought before playing the game. I actually thought this was a good idea as I could see a market for a quick little deduction card game. My opinion of Lie Detector The Crime Solving Card Game changed quickly after playing the game though as there is very little deduction in the game. Outside of having to remember the four clues you obtain throughout the game, there is next to no deduction in the game. You just have to use the four clues to find the one suspect that matches all of the clues.

Instead of being a deduction game I would mostly consider the game to be a set collection game. In order to win the game you need to make melds of three cards of the same color. You form the melds in order to be able to get information out of the witnesses in the interrogation rooms. Basically the gameplay revolves around trying to acquire cards of the same color so you are able to form melds.

While my assumption that Lie Detector The Crime Solving Card Game was a deduction game might have been off, the fact that the game is short and simple was spot on. I can’t imagine it taking more than a couple minutes to teach the game to a new player. The rules are quite straightforward as you mostly are just collecting cards of the same color. There are some special action cards but they are really straightforward. With how streamlined the game is, it also moves really quickly. You should be able to finish most games within 10-15 minutes. I think it would be hard to find a much shorter “deduction” game.

In general there are some things that I liked about Lie Detector The Crime Solving Card Game. The game actually has a really good base which could have been developed into a good game. While the game has quite a few problems (which I will get to shortly) I had some fun with the game. It is basically one of those games that you can have some fun with if you want a game that you don’t have to put a lot of thought into. I have played quite a few better filler card games but I have also played many worse games as well.

I think the biggest problem that I had with the game is that for the most part it relies on luck. The game has some decisions that you have to make but they are usually pretty obvious. While you can lose the game due to a bad decision, I don’t see many situations where you will win a game because you made a brilliant decision. Whether you win or lose is much more likely going to depend on who is dealt the best cards. Whoever is dealt the better cards should win each game.

Most of the luck in the game comes into play when forming melds. The player who is dealt higher numbered cards in the same color has an advantage in the game since they will be able to form melds quicker. Wild cards are also quite helpful especially the wild three cards. Having luck on your side also helps when you decide to roll the die. Rolling the die in Lie Detector The Crime Solving Card Game is a pretty risky proposition. Rolling a high enough number gives you a huge advantage in the game as you won’t have to form as many melds. If you roll too low of a number though it can ruin your chances of winning the game as having to discard one of your melds without getting a clue will really set you back.

The reliance on luck and overpowered evidence tampering cards leads to another potential issue where one player can easily get blown out in the game. Generally games are best when all of the players are pretty close until the very end of the game. While this is possible in Lie Detector The Crime Solving Card Game, it is just as likely that one player will destroy the other player. In one game I played both players were pretty close through the first clue. One player then used several evidence tampering cards and some luck to get the last three clues before the other player was able to get another clue. The ultimate winner became a forgone conclusion pretty early in the game as the other player basically needed a miracle in order to win the game.

The final problem that I had with the game is that too often players were struggling to keep cards in their hands. After you play a meld or two you will have few cards left in your hand. You then basically have to sit out the next couple turns as you acquire some more cards so you can form another meld. While I can understand the idea of discarding cards in order to refresh the top card of the discard pile, it makes this situation even worse. If you take the top card from the discard pile you will end up adding zero cards to your hand or even potentially losing cards during your turn. Even if you take the two cards from the draw pile, at max you are only adding one card to your hand. While the game still moves pretty quickly, it slows down the game having to waste several turns just drawing cards to expand your hand.

The components for Lie Detector The Crime Solving Card Game are basically get what you would expect out of a Mattel card game. The cards are a little thin but are of a decent quality. I think the best thing about the components is that the artwork is actually pretty good. The game uses a cartoony style which I actually think works pretty well for the game. Otherwise the components are nothing special but they do their job.

Should You Buy Lie Detector The Crime Solving Card Game?

Basically when I look at Lie Detector The Crime Solving Card Game I see a completely solid but unspectacular card game. The game is quick to learn and play. While the game may initially look like a deduction game, it is more of a set collection game. The gameplay has some interesting ideas and you can have some fun with it if you are looking for a game that you don’t have to put a lot of thought into. The game doesn’t have a lot of decision making though and relies on a lot of luck. The player who gets dealt the best cards is likely going to win each game.

If you would like to purchase Lie Detector The Crime Solving Card Game you can find it online: Amazon