How to Play Zing!

The cards are shuffled and fifteen cards are dealt to each player. All of the tokens are placed in the center of the table. Each round consists of three stages.

Each round begins with the players making predictions on how well they will do in the round. The player to the left of the dealer is the first player to make a prediction. Players can choose one of two options in the prediction phase of the game.

This player has predicted that they will win one orange, two green, one red and one purple trick.

If none of the tokens remain for a color that a player wants, they can take the color they want from another player and give that player a wild token in exchange.

This player ended up taking all three orange tokens. Another player wanted an orange token so they took one of the tokens and exchanged it for a wild token.

A player can also choose to become the Zinger. If a player takes the Zinger piece they are unable to take any other tokens and no one can take the Zinger token from them. When a player becomes the Zinger their goal is to try and prevent the other players from getting the tricks that they predicted they would be able to get. 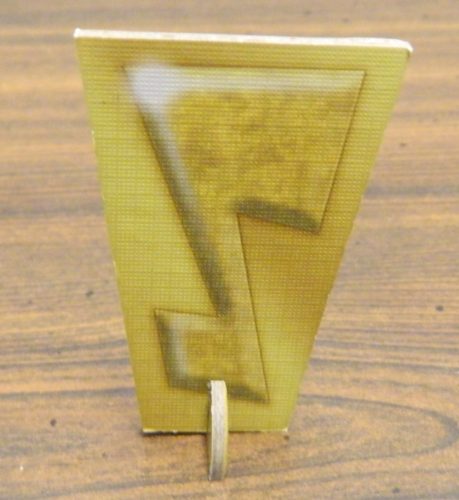 This player has chosen to be the Zinger for this round of Zing!

After every player has played their card, the winner of the trick is determined. If one or more players played a red card, the highest numbered red card played wins the trick since red cards are always treated as the most valuable color. 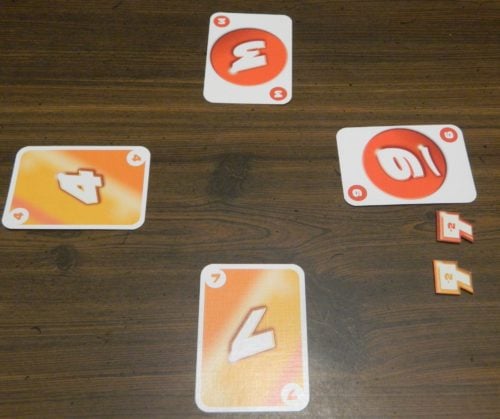 This trick began with the seven orange which made the trump color orange. Two players played red cards though so the highest red card wins the trick. The player who won the trick is able to get rid of either a red or orange token.

If no red cards were played, the highest numbered card of the trump color wins the trick. 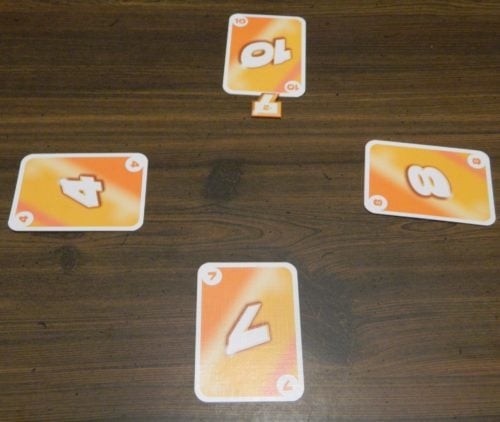 For this trick the trump color was orange. Since everyone played an orange card the player who played the highest orange card wins the trick. The winning player is able to get rid of one of their orange tokens.

The player who won the trick gets to play the first card for the next trick.

When the players have played all of their cards, scoring takes place.

All of the players that aren’t the zinger will score negative points for every token still in front of them.

This player had an unused wild token, an unused prediction token, and a penalty token which earns them -9 points. 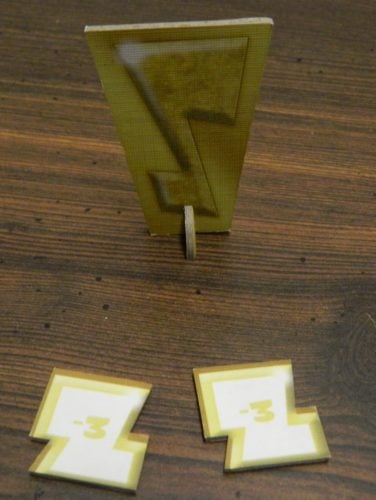 The Zinger player in this round would score -2 points since they were able to get the other players to draw two penalty tokens.

Everyone writes their score down for the round. If less rounds than the number of players have been played, a new round begins. All of the cards used in the previous round are shuffled and fifteen cards are dealt to each player.

The game lasts for as many rounds as there are players. All of the players total up their points for the game. The player with the least negative points wins the game.

My Thoughts on Zing!

To begin I would like to point out that Zing! is game that has undergone several different iterations throughout the years. In the United States the game began as Zing! and was published by SimplyFun in 2005. Five years later the game was re-released by AMIGO as Wizard Extreme. Finally the game had a Kickstarter this year (2016) under the name of Sluff Off! which is expected to be released next year. While I played the Zing! version (which is the version I am reviewing), as far as I can tell all three versions of the game are the same outside of theme changes and some different terminology.

As far as the trick-taking elements of the game, Zing! really doesn’t differ from other trick-taking games. Basically each round consists of fifteen tricks where players try to play the highest numbered card that matches the color of the first card that was played. Zing! also includes a wild color that automatically beats the trump color. Basically if you have ever played a trick-taking game before you know what to expect out of this part of the game.

The best part about the prediction element is the fact that it helps reduce the card draw luck that is present in most trick-taking games. In most games if you are dealt bad cards you are going to get destroyed in that round. That is not the case in Zing! since all that matters is how well you predict the number of tricks you are going to win. If you have truly terrible cards you can take no tokens and do better than a player that wins a lot of tricks. This removes some of the luck and places more emphasis on playing your cards to win the tricks that you predicted you would win.

The prediction mechanic also adds quite a bit more strategy to the genre since it makes you have to think about how many and which tricks you want to win in the game. You need to figure out how many tricks you are going to win and which color tricks you are going to win. The game punishes you if you bid too high or low so you have to try and be as precise as possible. While it is probably better to overbid slightly (extra prediction tokens at -2 points are better than penalty tokens at -3 points), you don’t want to overbid by too much or you will get stuck with a bunch of tokens. An interesting side effect is that players also need to try and lose tricks that they didn’t predict that they were going to win.

Another mechanic I liked was the idea of the wild tokens. The tokens are interesting for a couple different reasons. First it can entice people to take additional tokens hoping someone will end up giving them a wild token. Second players might be less likely to take tokens that they otherwise would have taken from other players since they don’t want to give them a wild token which is easier to get rid of. Finally while the wild tokens are easier to get rid of, they are also worth more negative points if you are unable to get rid of them. Therefore towards the end of a round a player might be forced into getting rid of a wild token instead of another token to guarantee that they can get rid of the costlier token.

While I enjoyed Zing! more than I was expecting, it is still not a perfect game.

The biggest problem that I had with Zing! is with the Zinger role (known as the Saboteur in other versions). I actually like the idea behind the role since it is interesting that there is a role that is meant to try and mess with the other players. My main problem with the role though is that it is way too powerful. I honestly don’t see why you wouldn’t want to take the Zinger role for most rounds.

The Zinger role is so powerful because it eliminates a lot of the player’s risk while also giving them a free pass to mess with the other players. As the Zinger your risk is limited to -4 points for a given round. No matter how poorly you do in a round you can’t do worse than -4 points. You can do a lot worse than that if you aren’t the Zinger though. In almost every round the Zinger will either score the least or second least points based on my experience.

With how unfair/broken the Zinger role is I think you either need to ditch it entirely or tweak it to make it a little less powerful. As it stands I think Zing! would be considerably more fair and fun without using the role at all. One possible way to fix the role though would be to start the Zinger at -6 or -8 since it would make the role a little less enticing and make you have to play a strong hand in order to have one of the best scores for the round. I actually think it could be interesting to have a bidding mechanic where whichever player is willing to start with the highest negative points for the round gets to play the role of Zinger for that round.

The other problem that I had with Zing! is the fact that you don’t have a ton of control over your fate in the game. Unless you are dealt an amazing hand your fate can easily be decided by the other players. Since the winner of a trick gets to lead the next trick, one player could end up leading most of the tricks. If that player keeps leading colors that you have weak cards for, you could keep losing tricks and never get to lead the colors that you are strong in. This is compounded by the red cards which always beat the trump color. The red cards make it possible for you to lose tricks where you play a very strong card.

These issues can really compound against players if they are unlucky. For example in one round I had five or six cards that were one of the three strongest cards for their color. Out of fifteen tricks I ended up winning one trick and that was only because I had the card that automatically wins a trick since it is the most powerful card in the deck. The combination of players playing red cards in tricks where I played high cards mixed with having to waste a lot of cards since I didn’t have the trump color made me waste all of my good cards. This lead me to getting a lot of negative points since I assumed I would win a couple tricks since I had a lot of good cards. While I probably could have played the round better, if you are unlucky a round can just go against you without a way for you to stop it.

Should You Buy Zing!?

As I mentioned earlier, Zing! is one of the best trick-taking games that I have ever played. I love the prediction mechanic in the game since it adds strategy to the trick-taking genre while also reducing the need to draw good cards. The problem comes from the Zinger role which is too powerful and there are times where you don’t have a lot of control over your fate in the game.

Zing! is a good trick-taking game. I will say though that I think the game is slightly overrated on Board Game Geek. Zing! fixes a lot of problems with trick-taking games but I don’t know if it is enough for people who don’t really care for the genre. If you like trick-taking games though, I think you will enjoy Zing! and should consider picking it up.

If you would like to purchase Zing! you can find it online: Amazon

Where In The World Is Carmen Sandiego? Card Game (2017) Review and Rules
Click here to cancel reply.