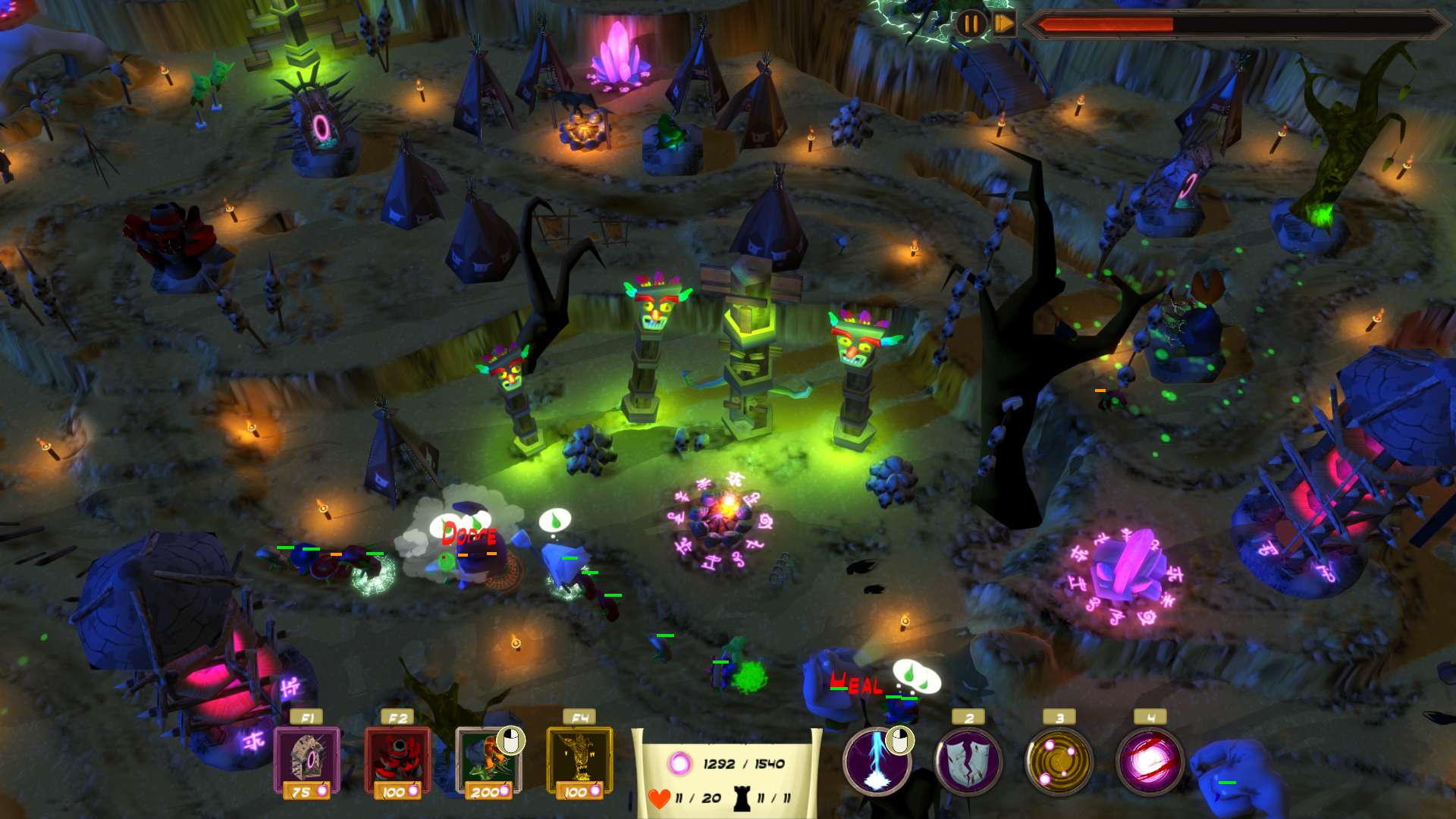 In Yrminsul you play as the forces of evil. You are sick of those good guys and decide it is time to take over the world. Using your wicked powers you strive to take one world at a time in order to build your empire and grow in power.

You gain control of new worlds by using your special abilities and towers to stop the good guys dead in their tracks. This works like your typical tower defense game. You use your resources (infamy) to build towers in predetermined spots on the map. The game includes 15 different types of towers which break down into four different forces of evil. Once placed these towers stay in place if you successfully capture a world. This means that if another battle occurs in this world you will already have towers set up in order to defend the world.

In order to upgrade and get access to new towers you need to build your infamy reserves. You gather infamy through battle and by controlling more territory. The more territory you control, the more infamy you gain each turn. This infamy is important because it lets you research new abilities and new towers and is used to build towers when you start a battle. During the game you will also encounter seeds which are used to help upgrade your towers during combat. The seeds you earn are placed on one of the four different tower groups (can be changed between battles) which allows you to upgrade those towers during combat. The tower types that don’t have a seed can’t be upgraded during combat.

While you are building your empire, the good guys will fight back trying to reclaim some of the worlds that you have captured. They will occasionally launch an attack against one of your territories which you will have to defend in order to avoid losing the territory and having to recapture it.

So will you be able to capture all 30+ worlds and put down the good guys for good?

Being a big fan of the tower defense genre I was interested when I saw Yrminsul on the Steam store this week. The problem with the tower defense genre is that so many games follow the same basic formula and don’t really add anything new to distinguish themselves from all of the other games in the genre. What makes Yrminsul stick out though is the fact that all of the towers in the game are persistent which means if you return to the same world in a future battle, all the towers you placed in a different battle will be there to aid you. This presents a really interesting mechanic for the tower defense genre. While I really liked this mechanic, I wish Yrminsul could have innovated in some other areas as well.

The area control mechanic makes it really feel like you are growing in strength. The more area you control you more infamy you have access to which means you can research more upgrades and build more towers when you try to conquer new lands. This extra infamy really makes you feel more powerful since in the early levels you can only build a couple towers to start a round and most of them are pretty weak. As you become more powerful you can pretty much fill the entire level with towers. The only downside with this is that it feels like the game is getting easier as you grow in power.

Speaking of getting more powerful I actually think the story/theme is really interesting. The story is kind of confusing but I still think it is interesting playing as the villain. While there are games where you play as the villain, I think Yrminsul does a good job making you feel like you are the villain in the story. As you grow in strength it feels the world might actually come to an end.

Overall I have had fun with Yrminsul and plan on finishing the game. I will admit that Yrminsul starts off a little slow. I think this is partly due to having so little infamy at first which means you can’t build many towers in the levels. It also takes too long in my opinion to unlock the most powerful towers. As you grow in power though the game starts to pick up as you have access to more worlds and more towers.

The biggest problem I had with Yrminsul is that outside of the persistent towers and the goal of taking over the kingdom by capturing worlds and growing your territory, there just isn’t much else that is new in Yrminsul. The game plays like your typical tower defense game. Other than building up your defenses over a couple fights, the tower defense mechanics play just like every other tower defense. If you don’t like tower defenses, Yrminsul won’t be for you.

While I loved the idea behind the area control elements of the game, I think the game could have done more with them. The biggest problem I had with them is that the game relies too much on trial and error. At least early in the game you have a lot of scenarios where you need to just guess which area you can successfully attack at your current level. The game gives you an indication on how difficult a level should be but that doesn’t really tell you if you can actually beat the level at your current level of infamy. I regularly ran into fights where there is no way I could win based on my current level. I don’t know if this was intentional or not but this forces a lot of back and forth as you have to keep regaining territories that you lost due to trying to take an area that you weren’t powerful enough to take. You could cheat and just reload a previous save or you can waste a lot of time reclaiming the same worlds over and over again. As your power grows though this problem seems to become less of an issue.

One thing that I think would have really helped curtail this back and forth would have been to allow players to build towers on territories they already control while not in combat. In the game you can only build towers during combat. This means that the only way you can build up your defenses is to start a fight. I am guessing this was a design decision to make the game harder and I admit that the game would have been a lot easier if you could build up defenses outside of combat.

The other problems I have with Yrminsul involve a lack of polish. These issues don’t ruin the game but can annoying and distract from the experience.

The first couple days I played the game there were some issues with saving games. About half of my saved games were deleted/didn’t save properly. This meant that I lost a decent amount of progress at one point. When I played the game yesterday though my game was saving properly. I saved in two different save spots yesterday which seems to have made the saves work properly. Maybe this issue was fixed with a patch and that is why it wasn’t bothering me yesterday. If you encounter this problem though I would recommend saving in two different slots with one of the two slots being a slot that has properly saved before.

Another annoying issue involves clicking on the enemies. For a lot of the abilities in the game you have to click on enemies in order to activate your ability. While this is not that bad for the larger enemies, it is a pain for the small enemies. The game doesn’t have a large enough detection area so you have to have your mouse in a very small area around the enemy in order to activate the ability. The game gives you a prompt that you are hovering over an enemy but you need to be so precise with your mouse that you waste a lot of time just getting the mouse cursor in the right spot. With really fast or really small enemies this is really hard to do and you will have to click many times just to get the game to register your click. Good luck regularly being able to click on the small spiders since they are fast and really small.

While I have never liked tower defenses where you have to personally collect your resources dropped from enemies, this is worse in Yrminsul because you don’t get enough time to do it. You have only seconds to collect infamy dropped from enemies before it disappears. This means that you need to either focus on building your defenses or collecting resources. You need to use some of the special abilities that help you collect infamy or you will lose so much of it.

Since I haven’t finished the game yet I can’t give you a definite game length. At this point I have played the game for 5 hours and have conquered about half of the map. At least an hour of that time was used getting to the point of one of my lost saves though. If the game stays at about the same difficulty level I would assume that the game would probably take around 8-10 hours to complete. As you are grow in power though the game seems to be getting easier so the game might be a little shorter than 8-10 hours.

Yrminsul retails for $9.99 with the game being on sale for $7.49 until March 9th. If you really like tower defenses and find the concept behind the game really interesting, I think Yrminsul could be worth it to you. If you are only a casual fan of tower defenses though I would probably recommend waiting for a sale.

Yrminsul is a very solid tower defense game. It is not the best tower defense I have ever played but I still have had quite a bit of fun with the game. I really like the area control/persistent towers mechanic in the game since it really makes you feel like you are growing in power. The problems with the game mostly involve not being much different from other tower defense games (other than the area control mechanic) and there are some polish issues that I hope get resolved through patches.

If you like tower defenses I think you will like Yrminsul and should look into picking up the game. If you don’t really like tower defense games though I don’t think Yrminsul distinguishes itself enough to make you change your mind on the genre.