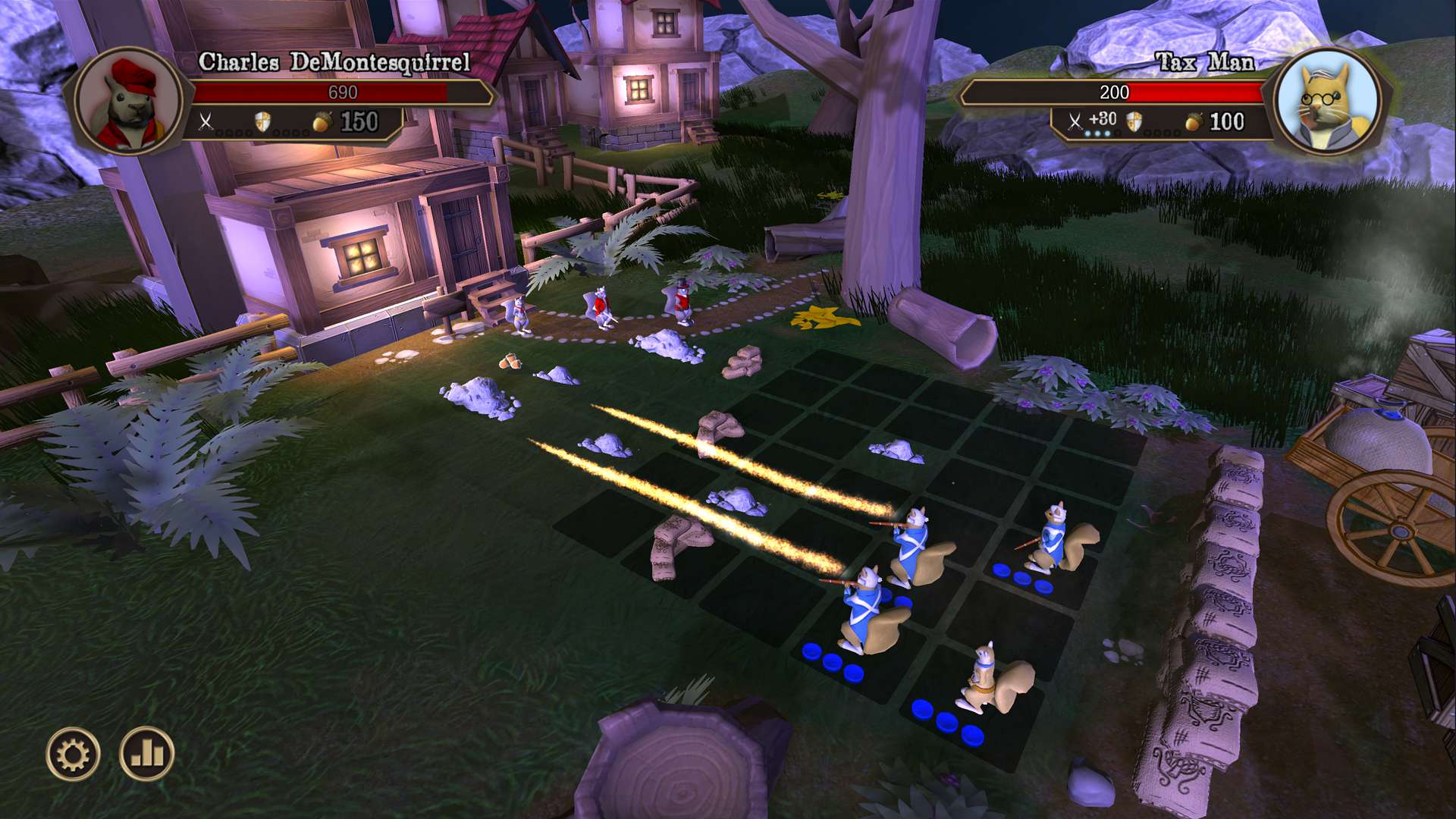 Acorn Assault is first a light strategy game where you line up your troops in order to defeat your opponents. You need to fight off the other player’s squirrels and reduce your opponent’s life to zero in order to win the match. The combat is turn based (with a time limit) where you begin your turn placing units and defensive structures. You are assigned which units you can place on your turn. You then get to buy upgrades for the current round with the acorns that you have acquired. Finally your soldiers fire at the enemy and deal damage to your opponent’s units or the other player’s base. In order to win the game you must destroy your opponent’s base.

Combined with the light strategy elements is a match three mechanic. When a player plays three or more of the same unit or defensive structure next to one another, the three units combine together to form a stronger unit. This unit is placed in the spot where the last unit was placed. In order to be successful in the game you need to use this mechanic in order to get better units and structures to defeat your opponents.

When I first saw Acorn Assault: Rodent Revolution on Steam, it stood out to me immediately. How could a game about the French Revolution featuring squirrels not peak your interest? Other than the charming theme I didn’t know what to think about the game. It looked like a pretty simple strategy game which I don’t mind but I was wondering with the theme whether the game was going to be a little too simple. After playing the game I have to say that I was pleasantly surprised by Acorn Assault: Rodent Revolution.

The first thing I have to talk about is the theme. After playing the game there is no doubting that the game has a lot of charm. I don’t know why but it is charming/funny seeing a bunch of squirrels decked out in old-timey military outfits fighting one another. The game finds clever ways to infuse the squirrel theme into the story. The game somewhat follows the story of the French Revolution even though you are not going to get much of a history lesson from the game. If you already know anything about the French Revolution you are unlikely going to learn anything from the game. The game does a good job using the setting though to create a charming and sometimes funny story.

While the theme is the main reason I was first interested in the game, I have to say that I was quite surprised by the gameplay. While the gameplay is quite simple, there is a decent amount of strategy behind the game as well. Placement is very important since you can only attack enemies that are in the same row as your units. Therefore you can put your units in the same rows as your opponents to attack their units or you can put them in rows where your opponent doesn’t have any units which allows you to directly attack your opponent.

The match three mechanic is where most of the strategy comes into play. You are going to want to take advantage of it as often as you can since to win a match you need to take advantage of the stronger units. As you get used to the game you will start forming your strategy around creating sets of three and this will drive how you play the game. Acorn Assault isn’t the most strategic game in the world but there is enough to it that the game doesn’t get boring quickly.

Acorn Assault is just a fun game. I kept telling myself just one more game. You can play the game for two hours and not even realize it. The game is probably not going to be for everyone but if you like match three or light strategy games you should have fun with Acorn Assault. If you don’t like strategy games at all or you prefer heavier strategy games, Acorn Assault may not be for you.

The biggest problem with Acorn Assault has to be the length of the single player campaign which I will address further in the Bang For Your Buck section. While I enjoyed the single player game and the story quite a bit, it just didn’t last long enough in my opinion.

One thing that I think could have been improved was the difficulty curve in the single player campaign. In some of the earlier levels you may lose a couple times as you figure out how to play the game. The mechanics are really simple but it takes a little while to understand the strategy behind the game. Once you understand the game though, the game becomes pretty easy especially once you figure out the computer’s strategy. The biggest challenge against the computer is figuring out how to minimize their special power. Once you figure out the strategy that works against a computer enemy it is quite easy to beat them. I haven’t finished the story mode yet but I have gotten to the point that I am winning every single match against the computer.

While the game has a decent amount of strategy, there is some luck involved as well. The units you get at the beginning of each round appear to be randomized. You always get five units but the distribution can change. You get either three offensive or three defensive units and get two of the other type. This should balance itself out long term but if you really need the offensive or defensive unit in a particular turn, luck could impact whether you win or lose a game.

At this point I haven’t finished the story campaign yet. The campaign is divided into five chapters and each section takes on average around an hour or so to complete. At this point I have completed four of the five chapters and I have played the game around four hours. Unless the game gets considerably more difficult in the last chapter, I think you could complete the campaign mode in around five hours. You can replay any mission at any time but I think once you have beaten the levels you aren’t going to want to go back and play them again especially with the computer being kind of easy.

This is where the multiplayer (online and local) comes into play. Most of the time you get out of the game will come from the multiplayer. I would recommend starting with the campaign mode since it does introduce you to the special abilities of all of the characters and gives you some time to understand the strategy behind the game. Once you have beaten the campaign though you are going to want to move onto the multiplayer.

The one question with multiplayer is how easy it is going to be finding a match. If you have friends locally that would be interested in the game you could play the game locally for quite a while. Hopefully the online portion of the game gets a lot of traffic since if you can find other opponents online you could play Acorn Assault quite a bit. If it becomes hard to find matches online though, you might not get as much enjoyment out of the game as you could have otherwise.

I was surprised by how much I enjoyed Acorn Assault. The really charming/funny theme is what made me initially interested in the game. The gameplay is also really fun though since it is simple but still has a surprising amount of strategy. Acorn Assault is the type of game that you keep telling yourself one more game until a couple hours have gone by. The only complaints that I have with the game is that it is kind of short if you don’t play the multiplayer much and the computer is kind of easy.

When deciding on a rating I was kind of torn. I really enjoyed the game but it is not going to be for everyone. I was really debating whether to give the game a 3.5 or a 4 and eventually settled on a 4. If the theme or gameplay really interests you I think the four rating is appropriate. If you are only casually interested in the game I think the 3.5 is more appropriate.