By the end of the game create the largest fortune between cash and valuable paintings.

To begin their turn, the player rolls the die and moves around the gameboard clockwise the number of spaces rolled. Players then follow the instructions printed on the space that they landed on. 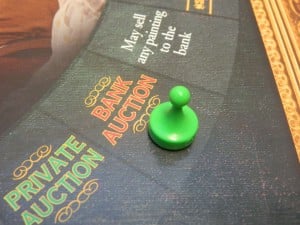 Bank Auction: Take the top painting and put it on the easel. All of the players then bid on the painting following auction rules. The player that wins the auction pays the bank the corresponding bid, looks at it, and takes the painting along with the top value card which is placed underneath the painting that was bought. 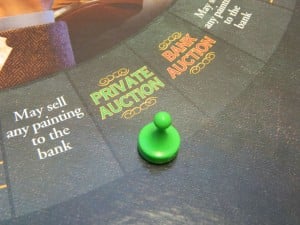 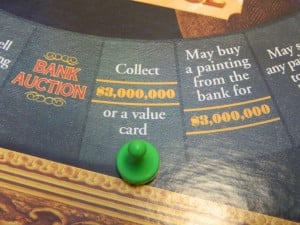 Collect $3,000,000 or A Value Card:  When a player lands on this space they have a choice on what they want to do. The player can choose to take $3,000,000 from the bank. This option is mandatory if the player has no paintings. The player otherwise can take the top value card and add it to one of their paintings. The player looks at the card and then adds it to any of their paintings. If it has a value on it, that value is added to the paintings current value. If the card is a forgery card it must be put on one of the paintings and will make that painting worthless. Once a value card is added to a painting it must stay with that painting. 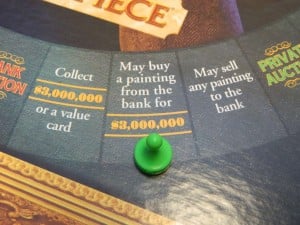 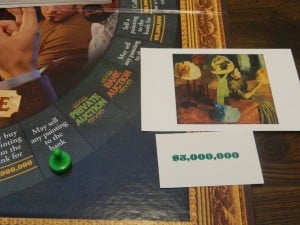 May Sell Any Painting to the Bank: This space allows a player to sell one of their paintings to the bank for the amount of the value cards underneath the painting. If the painting has a forgery card underneath it, the painting is worth nothing. 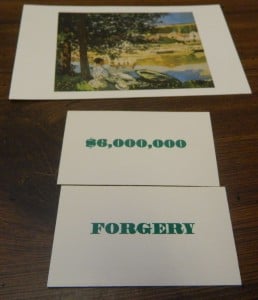 If the painting has two or more cards underneath it and none are forgery cards, the painting is worth the value of all of the cards combined. 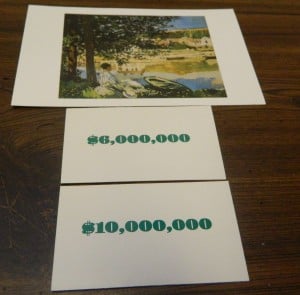 Players are going to want to sell their most valuable painting in order to prevent it from being stolen by one of the other players. The sold painting is removed from the game and the value card is put in the discard pile. 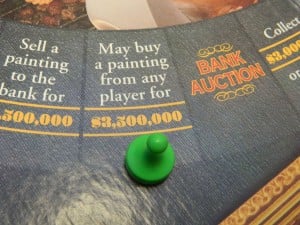 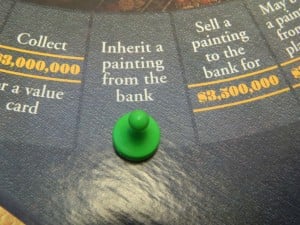 Inherit A Painting From the Bank: The player landing on the space gets a free painting from the bank along with the top value card. 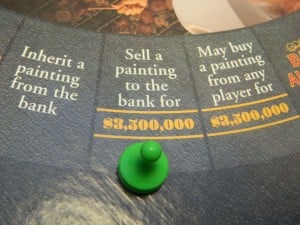 Sell A Painting to the Bank for $3,500,000: The player landing on the space has to sell one of their paintings to the bank for $3,500,000. Even if the painting is worth more than $3,500,000, the player only receives $3,500,000 from the bank. Players want to sell their lowest valued painting or a forgery in this situation. The sold painting is removed from the game and the value card is put in the discard pile.

During auctions the following rules must be followed:

When the last painting has been bought or auctioned off from the bank, the game ends. The players add up their cash and the values of the paintings that they currently own. Whoever has the most value in cash and paintings wins the game.

While not as popular as other Parker Brothers games like Monopoly and Clue, Masterpiece was a pretty successful game for Parker Brothers since the game has had several reprints over three decades. Originally created in 1970 Masterpiece brings you into the world of art dealing as players compete to buy and sell the most valuable paintings while avoiding purchasing forgeries. Despite having an interesting theme and the potential to be a good game, Masterpiece fails due to so much reliance on luck.

Luck will very likely be the reason the eventual winner wins the game. While the game has some decisions (far too few in my opinion), they have little to no actual impact in the game. Masterpiece is one of those games that you play and see who wins since you have little impact on what happens in the game. Luck is so important in the game here is a list of some of the things in the game that rely on luck.

That is probably not even a complete list of all of the areas where luck comes into play. I would be surprised if a game of Masterpiece was ever won without a lot of luck.

This reliance on luck is a shame since the game’s premise is actually quite interesting. The game could have made for an interesting auction game. While the game includes auction elements, they are pretty pointless since every player is pretty much just guessing how valuable a painting is because players have so little information about the value of paintings. There are only two ways a player gets any information about a painting. If they previously owned the painting they will know what it is worth. Players can also somewhat narrow down the possibilities since players know the distributions of the different value cards.

While these two things could give you some information for an educated decision, rarely will they actually help. The same painting will rarely be put up for private auction twice so players won’t be able to bid on a painting they previously owned. While you could do some process of elimination to determine the value possibilities for a painting, you aren’t going to get a good picture from it. There are too many value cards in the game that you won’t see enough of the value cards to be able to make a good conclusion of what values remain in the game.

Since you really can’t figure out how much a painting is worth, you pretty much need to just guess throughout the entire game. Guess well and you will make a lot of money. Guess poorly and you have no chance at winning the game. Always having to guess takes a lot of the satisfaction out of the game. If you do well it is because you guessed well. If you do poorly it is because luck wasn’t on your side. Other than making decisions on playing risky or conservatively your decisions have no impact on the game.

The two elements in the game that I really don’t like are the private auctions and the forgeries.

My problem with the forgeries is that there are not enough of them in the game. In the 1996 version of the game there are only two forgery cards. This means that only two players or one very unfortunate player will have to deal with forgeries. This puts them at a big disadvantage. I personally think there should have been more forgery cards since it would be more likely to affect all of the players. More forgery cards would have added more risk to the game as well so players would have to play more cautiously.

The components might actually be one of the best parts of Masterpiece. Each version of the game includes 24 different famous paintings. While each version of the game appears to have different paintings, each version includes some well known and some other lesser known paintings. The game should do a good job teaching players about some famous pieces of artwork. Otherwise the components are typical of what you would expect from a Parker Brothers game.

It is a shame that the game relies so much on luck because I think the game could have been good. People who really like art might still enjoy the game despite the game’s flaws because the game does feature some famous works of art and does a decent job simulating an art auction despite the fact that bidders would not bid on painting if they didn’t even know if the painting was real. The art auction theme is a good idea for a game. This was shown to be true by the game Modern Art

which was made by Reiner Knizia. While I have never played Modern Art, it has a really good rating on Board Game Geek so I have to assume that it is a good game. Masterpiece is not a terrible game if you don’t mind just playing a game and seeing who wins the game. If you like to have an impact on your fate in the game though, Masterpiece is an average to below average game.

While I have been kind of harsh on Masterpiece, it is not a terrible game. It just relies way too much on luck to be anything more than a below average to average game. The game is easy to play and you can have some fun with the game but it is frustrating that you have so little impact on what ultimately happens in the game since you are pretty much just guessing throughout the entire game.

If you generally like Parker Brothers games and/or are a big fan of art I think you could enjoy Masterpiece. If luck drives you nuts though you will probably hate Masterpiece.