You’ve Been Sentenced is played in rounds. Each round begins with every player taking 10 cards from the draw pile face down. Everyone flips over their cards at the same time. All of the players try to create a sentence with the words in their hands. The sentences must be grammatically correct and make logical sense. Players do not have to use all ten cards. 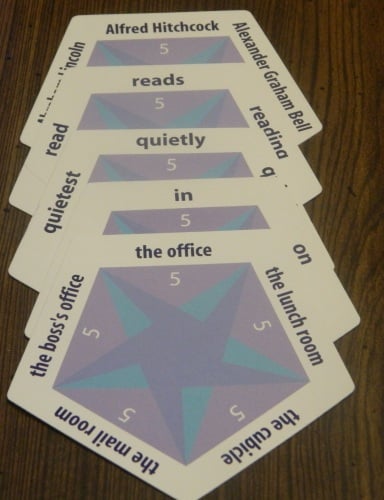 After all points are tallied for each player a new round is started and all of the players draw ten new cards. Once a player reaches at least 200 points after a round the game ends. At this point whoever has the most points is the winner. If somehow two players are tied (with scores over 200) they play one final round and the player who receives the most points, wins.

You’ve Been Sentenced was created in 2005 by McNeill Designs. Over the years the game has won over 20 national awards. I am not a huge fan of word games but the concept looked interesting enough that I thought it was worth giving a shot. While it is not fantastic, You’ve Been Sentenced is one of the better word games that I have played.

You’ve Been Sentenced is not the most original word game but it is an interesting game. The game is simple to learn and quick to play. Children above the recommended age of 8+ shouldn’t have any trouble understanding how to play the game. Their success in the game will be dependent on how strong their word/language skills are. While the game is simple enough for children to understand, I still had fun playing the game. You’ve Been Sentenced is not the type of game I would play for hours at a time but it is a game that I would bring out from time to time for a quick game.

You’ve Been Sentenced genuinely shines when players make wacky sentences. If you play the game seriously, you are going to miss out on most of the fun in the game. The game can be played as a serious word game but I don’t see it being that fun. This game thrives on its’ wackiness. At least in the game I played, all of the players tried to win by creating the best sentences but at the same time tried to make the wackiest/funniest sentences they could. The sentences themselves can be funny but it is sometime even funnier when someone tries to defend/challenge one of the sentences. For an example of how wacky the sentences can get, the following sentence is probably the weirdest sentence in the game I played: “Hippie Daniel Boone secretly poisoned the office fatty.”

Another thing I liked about You’ve Been Sentenced is that it has quite a bit of replay value. The game comes with 540 cards which should last for a long time since it is very unlikely that you will get the same cards in the same combinations. The game also has seven word expansion sets so if you purchase any of the expansion packs you could play the game for a very long time. In addition to the number of cards, the game also includes quite a few variants some of which alter the game enough that the game should feel different. You can also easily create your own house rules. My group came up with the house rule that everyone gets 20 cards on their turn but they had to use at least 10 of the cards. I actually had more fun with this variant since the resulting sentences were usually quite hilarious.

One thing I have mixed feelings on is the bonus that the first player to complete their sentence gets. I like the idea since it presents a risk reward element to the game. If you take the timer you get less time than the other players to create your sentence. Therefore you might not be able to maximize the value of your sentence. By flipping the timer though you hurry up the other players and you also get a bonus if your sentence is approved. This creates an interesting atmosphere where you are focused on creating your best sentence but you also want to keep an idea on your opponents since it is beneficial for you to be the player to flip the timer. You sometimes have to decide whether you should go with a shorter sentence that will allow you to flip the timer or try for a longer sentence which will get you more points.

In addition having the timer element stops players from taking forever to create a sentence. Once the timer is finished, no one can keep working on their sentences.

What I don’t like about the timer/bonus is that it has too much impact on the game in my opinion. This is because the bonus is worth too many points. Usually sentences earn between 20-30 points. Ten bonus points is too many in my opinion. I honestly think the best strategy in the game would be to quickly come up with a four to six word sentence and then quickly flip the timer. With this strategy you should get more or almost as many points as the other players. By flipping the timer you also rush the other players. Some of the other players might not even be able to form a sentence in time. Overall I think the timer/bonus should be kept in the game but it should be lowered to five points. Five points helps out the quickest player but not so much that players will exclusively compete for the bonus.

The biggest problem with You’ve Been Sentenced is your success in the game relies too heavily on luck. When you draw cards you need to hope that you get a good mix of verbs, nouns and other parts of speech. If you don’t get a good mix you will have a hard time making a good sentence. If you have too many verbs or nouns there is no way you can use all of your cards. You will generally need to just play a short sentence. I kind of wish that the cards were separated by parts of speech (nouns, verbs, etc) and players would have gotten the chance to pick their own distribution of each type of word. If the game was set up this way players would have more influence over their fortunes in the game.

You’ve Been Sentenced also has a problem with the judging aspect of the game. In the game your competitors determine if you score points or not. Highly competitive people might have an inclination to try and deny all other players’ sentences since it will help them to win the game. If someone plays the game like this though, the game will quickly lose all of its’ fun. In order for the scoring system to work, players need to play the game honestly and not take the game too seriously. Players need to vote how they truly think and not try to game the system in order to help their chances to win.

Finally I thought the components of the game were solid. For theme purposes I know why the box is a pentagon shape, but I don’t like the shape of the box since it is going to make it harder to store. The cards are your typical card stock. As I mentioned before I wish the cards were separated by what type of speech they were, but the designer decided to make card choice be random. The pentagon card shape is interesting and works well since each word option for the card is presented on a different side of the card. The shape of the card makes the cards hard to shuffle though.

You’ve Been Sentenced is not fantastic but it is far from bad as well. It is an interesting word game that is more fun the less serious you take it. The harder you try to amuse the other players with your sentence choice, the better the game is. Unfortunately the game suffers from the luck of the draw which could have been remedied by separating the cards based on the parts of speech.