To begin the game everyone picks a color and takes the secret agent and commando of that color. The players place their secret agent and commando in the corresponding embassy  in one of the four corners (based on the color of the pawns the player took). The hostage is placed in the center of the board in the holding area. The players roll the dice to determine the first player.

The players’ turn begins by rolling both dice. One die is used by each pawn. The player gets to determine which die each pawn will use. If the pawn is not blocked, it must move all of the spaces indicated by the die. Player pawns must move in the direction that the pawn is facing at the beginning of their turn. If the pawn crosses an intersection they may take any path except for the path they came from. Once the pawn has been moved all of its’ spaces, the player chooses which direction they would like the pawn to face and move during their next turn.

During play, pawns will run into each other. Two pawns of the same color may always move past one another. If the pawns are of different colors, the outcome of two pawns running into each other is dependent on which direction the pawns are facing. In the following examples Player A is the current player who is moving their pieces while Player B is one of the other players. 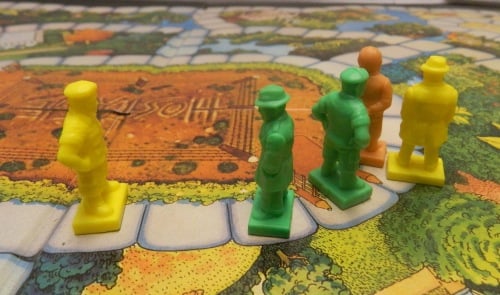 In the picture above, it’s green’s turn. The secret agent (the left most green token) is facing a block scenario. If he only moves one space, nothing special occurs. If the pawn has to move two or more spaces it will be involved in a block scenario. It will just move one space and turn around. The green pawn on the right is facing the back of the yellow player. If the player rolls a one, they can send the yellow secret agent to one of the border stations. The hostage will either stay in the spot that it is currently on or it can be sent back to the cage in the middle of the board. If the commando pawn has to move more than one space it will move past the yellow piece since the pawn’s back is facing the green player.

When one player successfully gets the hostage back to their embassy, they are the winner of the game.

Hostages The Board Game is a game made by the small publisher Tabby Toys Inc in 1985. Hostages would be best classified as a roll and move game. You roll the dice and move your pawns the corresponding number of spaces. As a matter of fact the game only comes with the gameboard, pawns and dice so there is really nothing else you could have done. If you have seen some of my other reviews you already know that I don’t really like roll and move games due to their lack of strategy and decision making. The only impact you have on the game is your roll of the dice. Hostages is not a great game and has some rule issues that I will get to soon, but it is actually better than a lot of the roll and move games I have played.

Hostages is better than most roll and move games since it at least has some strategy to it. Most of the decisions you make regarding movement of your pawns is pretty obvious. Hostages at least lets you make some decisions though unlike most roll and move games. The strategy doesn’t really come into play until one player take control of the hostage. Once the hostage is taken all of the other players start to swarm that player. I thought it was kind of fun working with the other players trying to stop them from returning to their base.

I had some fun with Hostages at first but it kind of got tiring after a while.

Hostages biggest problem is that the game could take a very long time to finish. I was somewhat joking when I mentioned that the game length could be forever. It could technically take forever to finish the game. In rare instances the game could take 10-30 minutes but most likely you are looking at an hour+ game. The length of the game comes down to how lucky one of the players are. If one player rolls well they could possibly quickly retrieve the hostage and make it back to their base before the other players set up a lot of roadblocks. Most likely the other players will trap them though and the game will be slow moving as the log jam sorts itself out.

This problem comes down to how the game is played. At first the game is a race to get to the center to retrieve the hostage. After one player gets the hostage though the game turns into a game of everyone against one player. In order to stay in the game, all of the other players need to work together in order to stall the other player to increase their odds of taking the hostage for themselves. In games of three or four this presents a situation where one player is highly outmatched. It is quite easy to trap one player when you have six pawns between three players trying to get in the way. At one point during the game I played, all eight pawns were within probably 10 different spaces. There was such a logjam that it was almost impossible to move. No progress could be made since pawns just kept running into one another.

As I already mentioned, I actually thought the chase and teamwork aspects of the game were very interesting ideas for a roll and move game. They could even have been great game mechanics. Unfortunately they lead to a game that could literally never end. In the game I played the following scenario played out several times. One player got the hostage and made a little progress before they were swarmed. This appears to keep happening which makes the game really start to drag on and become kind of boring.

If you play the game with only two players, this issue should resolve itself. Only having two players would not make a very fun game though. With two players, it will be hard to trap the player which means that the first player to get the hostage is likely to win the game. Without the chase mechanics I think the game would be pretty boring. Even though having three or four players can lead to the never ending gameplay, I think it would still be the preferential way to play the game.

In addition to the never ending issue, some of the movement mechanics are a little strange. For the most part the movement rules work and are pretty easy to understand. During the game I played though we actually got into situations that we were not exactly sure how to resolve. When all of the pawns were within ten spaces, there were times where players couldn’t move and other times where we just had to make up our own rules with regards to where pawns could and could not move.

The game also has some theme issues. The theme is pretty much tacked on. Supposedly you are trying to retrieve the hostage since he has some information on some new type of fuel resource. The theme is really just there to provide some light backstory and a reason for why you are doing what you are doing. The theme really has no impact on the gameplay. In fact the theme makes some of the gameplay mechanics kind of stupid.  For example when one of the secret spies has the hostage, it is kind of foolish that other commandos and spies would just let the spy walk past them just because they had their back or side turned towards them.

Finally I thought the contents were pretty nice. The gameboard is larger than I would expect. It has some nice cartoony looking images. The spaces are also easy to distinguish from one another. The player pawns are also pretty good. They aren’t the most detailed pawns in the world but they show a decent amount of detail. The pawns are made of pretty thick plastic so they should last unless you are really rough with them.

Hostages is an interesting roll and move game. The game actually had some potential for a roll and move game. The game has some strategy and interesting gameplay mechanics. Unfortunately the game suffers from being bogged down at times. The game could literally take forever to end since the game usually devolves into every pawn being crammed together so no one is able to move. As soon as someone makes some progress, all of the pawns get stuck together again. A game that should have been like 20-30 minutes long turns into an hour plus game.