To begin the game every player grabs the string (spaghetti) of their color and holds it as high as they can over the center of the gameboard. At the same time everyone drops their string onto the gameboard. Players then insert the ingredients into the board at random. After all of the ingredients have been placed onto the board, all of the players turn their forks in order to get rid of the slack in the string.

On a players’ turn they first roll the die. The player then removes an ingredient from the board that matches the symbol that was rolled. If free choice is rolled the player may remove any ingredient that they want. If there are no more of the ingredient rolled left on the board, the player keeps rolling until they get an ingredient that is still on the board. Once the ingredient has been removed everyone yells out “Spaghetti!” and they turn their forks as fast as possible. If no one is able to twirl up all of their spaghetti, the die is passed to the next player. 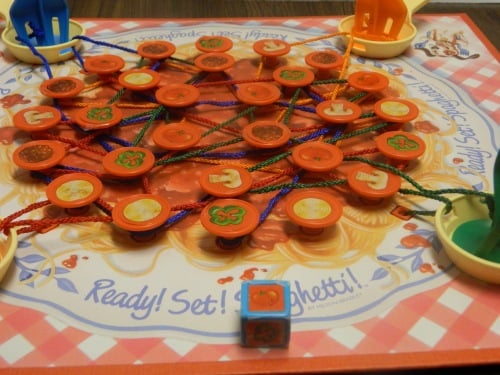 In the picture above the player rolled a tomato. The player would get to pick which one of the tomato toppings they would like to remove. All of the players then twirl their forks in order to remove the slack generated by the topping being removed.

In the late 1980’s and early 1990’s many children’s board games started to try some new things. Games started using new themes and started implementing unique gameplay mechanics. Growing up in the early 1990’s I actually fondly remember playing quite a few of these games. Unfortunately a lot of these type of games have not held up well over the years as evidenced by my reviews of several of these games.

When I was a child I never played Ready! Set! Spaghetti! The game has that classic 1980’s charm to it though so I thought I might as well give the give a chance. The game is obviously gauged toward children so it is very simple and relies way too heavily on luck. As an adult though you may be able to get some enjoyment out of the game.

The biggest problem with Ready Set Spaghetti is the total reliance on luck. The game has a tiny bit of strategy but unless the other players constantly make mistakes, the luckiest player will always win the game.

The greatest affect luck has on the game is the string drop at the beginning of the game. How the spaghetti drops can ultimately decide the winner before the game has even started. How your string falls will determine how many ingredients will need to be removed before you are able to wind up all of the string. If you are lucky your string will fall in a pattern that doesn’t loop around many toppings. On the other hand if your string drops and ends up landing where it gets tangled by many toppings you have a slim chance of winning.

It’s disappointing that the most important part of the game happens before the game even begins. There really isn’t much the game could have done about it though. Players just have to live with the outcome of the spaghetti drop.

Adding to the luck in the game is the fact that you have to roll a die to determine which topping to remove. Die rolls always add luck to a game. In Ready Set Spaghetti it has big impact on the game. If you don’t roll well you will not win. In order to win you need to either keep rolling free choice or the ingredients that are blocking your piece of spaghetti. The other players will not help you unless they are forced to. If luck is not on your side you will continually roll ingredients that don’t help you and in the worst cases will help out your opponents. Just like with the spaghetti drop, there really isn’t anything the game could have done to reduce or eliminate the luck aspect of the die roll except for removing the die. If you removed the die there really wouldn’t even be a game though.

Luck dominates the game and there is little that strategy can do to mitigate it. The only decision in the entire game involves deciding which ingredient to remove. The strategy is pretty simple though. You look at all of the toppings that you rolled and try to find a topping that is in your way but not any other players. If that doesn’t exist you move onto finding a topping that helps you and another player, as long as removing that topping won’t let the other player win. Then you move onto toppings that help no one. Finally you end with toppings that only help other players which you should only remove if that is the only topping you can remove. Your decision of which toppings to remove will impact the game but for the most part the choice is quite obvious so there is little to no strategy to the game.

Ready Set Spaghetti has essentially no skill/strategy and relies too heavily on luck, but if you can look past those issues the game can be kind of fun.

Ready Set Spaghetti’s greatest asset is its’ originality/quirkiness. At least as far as I am aware, there really aren’t any other games that are similar to Ready Set Spaghetti. Ready Set Spaghetti has that 1980’s early 1990’s game feel to it that I alluded to earlier. It has a unique theme and gameplay mechanic. The game has a lot of charm to it which makes up for some of the other issues with the game. I wish today’s children’s game had the same charm as they did back in the 1980’s.

Obviously the game is meant for children and children will have more fun with the game than adults would. I never played the game as a child and didn’t play the game with any children but I think children should really enjoy Ready Set Spaghetti. It is easy to learn and play. It is stimulating enough that children shouldn’t get bored with the game. Children are also more likely to look past the flaws with the game.

Most likely adults won’t get as much enjoyment out of the game as children would. If adults can think past the fact that the game relies entirely on plain dumb luck though, I think they could get some enjoyment out of the game. It most likely isn’t a game that adults would play over and over again but it is a unique experience that I had a little fun with. I don’t plan on playing the game again but it wasn’t a waste of time either.

Overall the components are solid. If they are taken good care of, they should last. At least in my copy of the game though, quite a few stickers were starting to fall off and had to be taped back on. Being a 25 year old game that is to be somewhat expected since the stickers are going to start to dry up and start falling off. Since the stickers are pretty important (on the toppings and die), you need to make sure you don’t lose any of them. The other complaint I have with the components is that set up for the game takes longer than you would expect. The gameboard takes a couple minutes to assemble with all of the toppings. That is far from a long set up but Ready Set Spaghetti is a children’s game as well as a quick pick up and play game. The set up seemed a little long for such a quick game.

Ready! Set! Spaghetti! is your typical 1980’s/1990’s board game. It has a unique theme and concept and should be fun for children. It is also really simple and relies too heavily on luck with the spaghetti drop and the dice rolls. Adults can get some enjoyment out of the game but it is unlikely to last.

If you have young children, I think they will enjoy the game. If you have fond memories of the game from when you were a child, the game most likely will hold up better than a lot of children’s games. If you are an adult and like children’s game, I think you could get quite a bit out of Ready! Set! Spaghetti! If none of these describe you though I would probably pass on the game unless you can find it for cheap.