One of the most popular dice games of all time has been Yahtzee. The simplicity of having to roll different combinations of dice appeals to a lot of people. I personally wouldn’t consider myself to be a huge fan of Yahtzee since there are better dice rolling games out there in my opinion. With any popular board game though, it should come as no surprise that Hasbro decided to branch out and make spinoff games for Yahtzee. One of those games is today’s game Yahtzee Turbo. If I had to sum up Yahtzee Turbo in a sentence, it is basically what you would get if you added an electronic component and a speed element to your traditional Yahtzee game. While it ends up adding more luck to Yahtzee, Yahtzee Turbo actually improves upon normal Yahtzee in some ways.

How to Play Yahtzee Turbo

Shuffle all of the cards and deal five cards face up to each player. Each player is allowed to rearrange their cards in any order and place them in a face up pile in front of themselves. Each player rolls one die with the player rolling the highest number getting to go first. Turn on the electronic component and you are ready to begin.

To start a player’s turn they tap the big die and follow its’ instructions. The current player then rolls their dice as fast as they can trying to roll the combination pictured on the top card in their pile. Players can keep rolling the dice while putting any dice that match the card off to the side so they don’t roll them again. 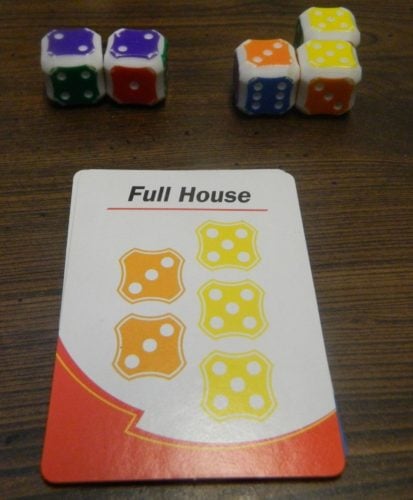 At this point the player has rolled two of the fives and one of the threes shown on their card. If time hasn’t run out they can keep rolling the other two dice trying to get the two numbers they still need to roll. 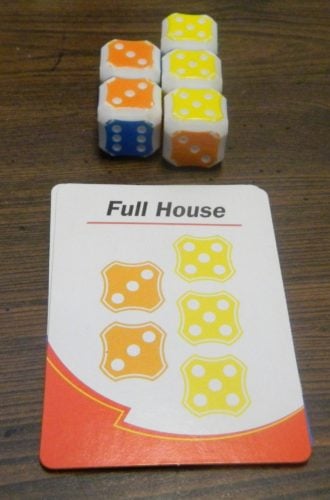 This player has completed their card. They should tap the large die as quickly as possible if time hasn’t run out yet. 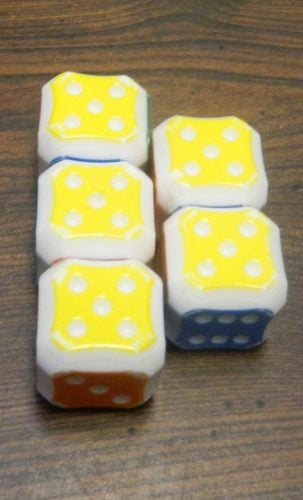 This player has successfully rolled a Yahtzee.

The game ends when one of the players discard their final card. The winning player holds down the big die until the congratulatory message is played.

My Thoughts on Yahtzee Turbo

So as I have already mentioned, Yahtzee Turbo is basically what you would get if you turned Yahtzee into a speed game. The basic premise of Yahtzee is still present in Yahtzee Turbo. You roll dice hoping to get various dice combinations. Instead of scoring points like in normal Yahtzee though you try to get rid of your cards in order to win the game.

The one area where Yahtzee Turbo really differentiates itself is with the electronic component. The electronic component adds a couple mechanics to the game with the most prevalent being the speed element of the game. In normal Yahtzee you can take as much time as you want but are only given up to three rolls to make a combination. Yahtzee Turbo takes the game in the other direction where you can roll the dice as many times as you want but are only given a certain amount of time in order to roll the numbers listed on your top card.

At first this might not seem like a huge change but it changes quite a bit in the game. While the basic premise is the same, the two games play quite differently. Normal Yahtzee is focused on analyzing odds as you try to roll the different combinations. There is a risk/reward decision as you debate whether to take the safe option or risk it hoping to score more points. Yahtzee Turbo is focused purely on speed. There is no risk/reward in Yahtzee Turbo since you just try to roll dice as quick as possible. All you have to analyze in Yahtzee Turbo is which dice you rolled match your top card. If you need it, keep it. If you don’t need it, roll it again as quick as possible. Once you get all the numbers you need hit the big die as quick as possible.

Another thing that the electronic component adds is the idea of rewards and punishments. When you successfully complete a card the game will reward you in some way. If you fail the game will punish you. At first I thought these were an interesting idea since they added some variety to the game. After playing the game for a while though I started to not like them as much because they are far from balanced. Some rewards can be really strong while other barely do anything. The same goes for punishments. The biggest problem with the punishments and rewards differing so much is that they just add more luck to the game. Get better rewards/punishments and you have a better chance of winning than a player who gets worse rewards/punishments. While I am guessing that this was a pure coincidence, Yahtzee Turbo can really favor some players. In one game one of the players ended up getting three to four free turns along with other good rewards. Some of the free turns had come after they failed to complete their card. Not surprisingly that player won the game.

The final thing that the electronic component adds to the game is that it self adjusts the difficulty. If three players in a row complete their card in time, the game speeds up giving you less time to complete your next card. If the opposite occurs the game gives you more time. I like that the game changes the difficulty to keep the game challenging but there is a flaw in the design if you are playing with four players. With four players one of the players will have to play with more or less time even though they had no impact in increasing/decreasing the difficulty. I don’t know why the game couldn’t have factored in the number of players so all of the players would have to fail/succeed to change the difficulty.

With Yahtzee Turbo and normal Yahtzee playing quite a bit differently, people are probably going to have differing opinions over which Yahtzee they feel is better. Not being a huge fan of the original Yahtzee I would probably say that I prefer Yahtzee Turbo. I like the speed element of Yahtzee Turbo since you don’t have to wait around while the other players figure out what to do. Most turns in Yahtzee Turbo probably take 30 seconds to a minute at most to complete so the game moves quickly.

I can see a lot of people preferring normal Yahtzee though since it does have more strategy to it. I wouldn’t consider Yahtzee to be a highly strategic game but there is next to no strategy in Yahtzee Turbo. Basically you have to roll as quickly as you can in Yahtzee Turbo in order to be successful. There are no decisions to make since you either need the die or don’t. If you prefer a less hectic game that has at least a little strategy you are probably going to prefer the original Yahtzee.

As far as components Yahtzee Turbo is solid but unspectacular. The electronic component works well but it could have used a volume control since it is quite loud. The cards are pretty typical. As far as the dice there are things I like and don’t like. I like that each side of the dice is color coordinated which makes it easier to see if you rolled the numbers you need for your card. The dice feel a little cheap though. With my copy of the game the paint is starting to chip.

Should You Buy Yahtzee Turbo?

If you don’t like dice rolling or speed games, Yahtzee Turbo is not for you. If you are looking for a speed version of Yahtzee though I think you could enjoy Yahtzee Turbo. I would recommend waiting until you can get a good deal on the game though.

If you would like to purchase Yahtzee Turbo you can find it online: Amazon