Being a fan of the Apples to Apples style of party games, when I see a game from this genre I am always willing to try it out especially if I can  find the game for cheap. While I have played a lot of games from the genre, most of them are at the very least average even if they aren’t highly original. The Funny or Die Card Game is another game from this genre which looked intriguing. Using pictures and captions to create jokes looked like an interesting tweak to the formula. Unfortunately the Funny or Die Card Game doesn’t work as intended due to too many mechanics that just don’t work right.

How to Play Funny or Die Card Game

Each player is given the following components:

The players choose the first player in any way that all of the players agree to.

To begin each round the current player rolls the die. All of the player put bills equal to the number printed on the side of the die that was rolled into the center of the table. If a player does not have enough money to pay the full amount, they pay as much of it as they can. 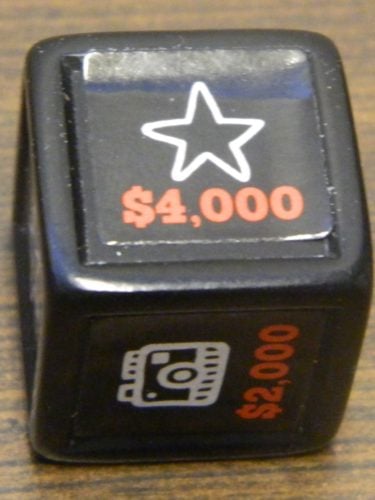 The current player will then draw three cards to place in the center of the table. The side of the cards that are placed face up depends on what symbol was rolled. 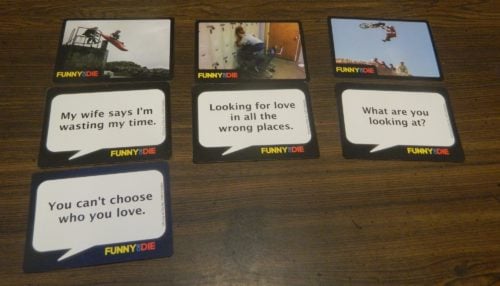 All of the players have played their cards for the current round.

If a caption card has a blank in it, the player fills in the blank when they make their joke. 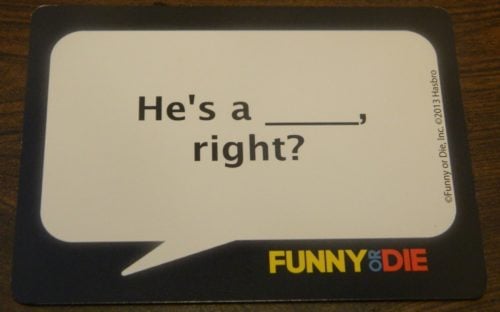 When this card is played, the player who plays the card has to fill in the blank.

If a player plays a card with a cat in a joker hat, the card works as a joker. The player can come up with any caption that they want or use any picture they want for their joke.

Once everyone has played their card and told their joke, it is time to vote. Each player will use their funny and die tokens. Each player will put their funny token (face down) on the joke that they thought was best. They will put their die token (face down) on the joke they thought was the worst. Players cannot vote for their own card. 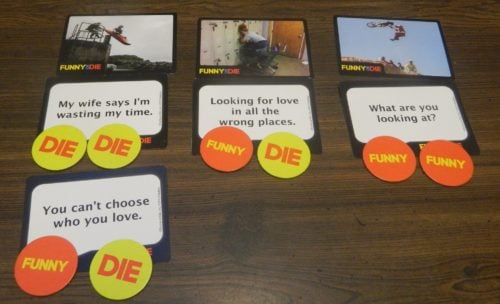 Voting has concluded. The top left card received -2 points. The bottom left and middle card scored 0 points (1-1). The card on the right scored two points and wins the current round.

After the winner of the round is declared, everyone takes back their die and funny tokens. All cards used in the round are discarded and each player takes a new card from the draw piles. The next player clockwise will become the first player in the next round.

The game ends when one of the players runs out of money. All of the remaining players count up their money. The player with the most money wins the game.

My Thoughts on Funny or Die Card Game

While I have never visited the Funny or Die website, I was interested in the game because I have always liked the Apples to Apples style party game. The one thing that intrigued me about the Funny or Die Card Game was the idea of mixing captions and funny pictures to create jokes. While the basic premise of the game is the same as all of the other games from the genre, the caption/picture mechanic intrigued me because I thought they would mix things up. While the Funny or Die Card Game plays somewhat differently, the game doesn’t work as well as it could have.

The idea of mixing captions and funny pictures sometimes works and at other times doesn’t work. I like that the game switches between captions and pictures since it adds variety to the game. The mechanics are really simple and can lead to some funny moments. I really like these mechanics and think they could have lead to a good game. They just don’t work right in the Funny or Die Card Game.

I attribute a lot of this to a fact that plagues a lot of Apples to Apples style games. The problem that a lot of these games face is when the cards in a player’s hand don’t work well with the cards on the table. Due to randomly drawing cards this is always going to be a problem. Some games do a better job of mitigating this than other games though. Funny or Die is not one of them. A lot of the captions themselves are not really funny which means that you need to find the perfect picture to play them with to make a funny joke. A lot of the time players have to just randomly choose a card to play and hope it is the best of all of the options. There was several times in the game that I played that I wanted to give all of the “jokes” the die token but I only had one of them so I couldn’t. While my group is not a bunch of comedians, we usually have several funny moments in most of these type of games.

While Apples to Apples works with families of all ages, a lot of these style of games are starting to target a more adult audience. While Funny or Die is far from as raunchy as Cards Against Humanity, I don’t think it is a game that I would play with younger children. The game has a recommended age of 13+ and I think that is appropriate. The game has a surprising amount of cards that have mild nudity. The captions don’t appear to have anything inappropriate in them. I could see certain groups using the cards and captions to make it into a pretty adult game though.

The biggest problem I had with the Funny or Die Card Game is that the game really needs streamlining. The game tries to differentiate itself from other games in the genre by adding new mechanics but for the most part these new mechanics just mess with the game.

One issue with the game is the use of money. Instead of just giving players a card for each round they win, the game decided to add money into the game. I really don’t know why this decision was made because taking a card for each round works perfectly fine. It is quick and makes it easy to determine how many rounds each player has won. You could also easily control the length of game by choosing how many cards you need to win. Using money feels unnecessary since it just adds another step to the game. Players end up passing money back and forth which leads to an indeterminate length.

The money actually creates some issues for the gameplay itself. With each player getting so little money at the beginning of the game, the game can end really quickly. A couple rounds where players have to pay $3,000 or $4,000 into the pot can bankrupt a player within three or four rounds. The other problem with the money is that with each round being worth different amounts of money it just adds unneeded luck to the game. No longer will the best player necessarily win the game. One player could end up winning four $1,000 rounds and end up in the same situation as a player who won one $4,000 round. While these type of games aren’t meant to be competitive, I think the player who won the most rounds should win the game.

I think the biggest case for Funny or Die needing streamlining though is the voting system. In order to connect to the website the game implements the funny or die voting system. While this looked like an interesting idea, it just doesn’t work.

First since everyone sees what card everyone else has played, Funny or Die has the issue that plagues a lot of these type of games. If the players are highly competitive you can easily sabotage the player in first place. Ultra competitive players will not vote for and probably will vote against the player in first place. The problem is that this really couldn’t have been avoided since players need to be able to fill in the blanks on some of the cards so players couldn’t play their cards anonymously.

The second problem with the voting system is that it causes a lot of ties. I would say that at least half of the rounds in the game I played ended in a tie. With every player adding a +1 and a -1 to one card and not being able to vote for their own card, it is really easy to have two or more cards receive the same number of points. Ties then head to a tiebreaker which more often than not just end in another tie. Our group decided to just settle all ties by splitting the pot between the tied players.

The components for Funny or Die are basically what you would expect from this type of game. 274 cards is a solid amount of cards with every card being double sided so it can be used for both a caption and a picture round. The card quality is typical but some of the images tend to be slightly blurry. The play money, chips and die are nothing special.

Should You Buy Funny or Die Card Game?

The Funny or Die Card Game tried to tweak the Apples to Apples gameplay to fit with the website Funny or Die. At first glance the game looks like it has some interesting ideas. The game is easy to play and has the potential to lead to some laughs. There are too many rounds though when none of the players can make a funny joke since their cards don’t work with the cards on the table. Add in the unnecessary money mechanics and the fact that the voting leads to way too many ties and the Funny or Die Card Game could have used some streamlining.

If you don’t like Apples to Apples style games I would be really surprised if you enjoyed the Funny or Die card game. If you like this type of party game you may get some enjoyment out of the game even though I have played many other games from the genre that are considerably better. If you like the genre and you can find the game for really cheap it may be worth picking up. Otherwise I would recommend passing on the game.

If you would like to purchase the Funny or Die Card Game you can find it online: Amazon