How to Play Swinging Snakes

Assemble the gameboard adjusting the wheel on the base to change the strength of the “magic” of the snake wheel. Place all of the snakes in the center of the table. The youngest player gets to go first.

To begin your turn you spin the spinner. Depending on the space the spinner lands on you must take the appropriate snake and add it to the snake wheel. When adding a snake you can add it anywhere you want and can even hang a snake off another snake. If you spin a color of snake that is no longer available, you skip your turn without having to add a snake. 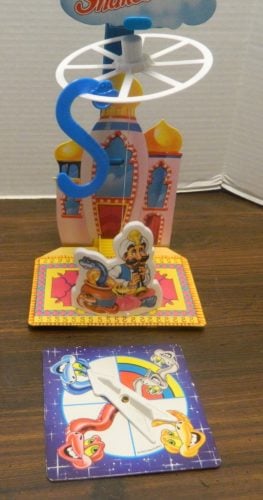 The player has spun the spinner landing on the blue snake space. The player will have to add a blue snake to the snake wheel.

If your spin lands on the double snake space, you must add two snakes of any color to the wheel. Before adding them to the wheel, you must interlink both snakes and hang them together on the wheel. 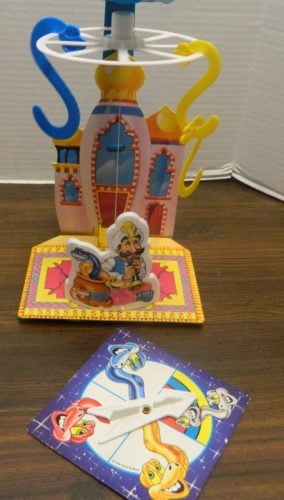 The current player’s spin has landed on the double snakes. They will have to add two connected snakes to the snake wheel.

The game ends when the wheel falls to the table. The last player to play a snake loses the game. The rest of the players win the game. 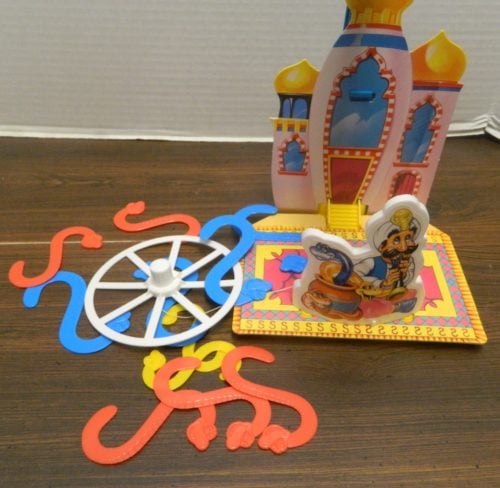 The snake wheel has fallen. All of the players other than the player who knocked down the wheel, win the game.

My Thoughts on Swinging Snakes

When you first look at Swinging Snakes it feels like your generic stacking/dexterity game. Spin the spinner and add the appropriate item to the stack. For the most part Swinging Snakes plays like every other game in this genre. Swinging Snakes does rely a little less on dexterity than a lot of these other games but is otherwise basically the same. If you have played one of these games before you should know what to expect from Swinging Snakes.

The one unique element of Swinging Snakes is the idea of the “magical” floating snake wheel. Using magnets in the snake wheel and the top of the gameboard, the string holds back the wheel so it floats in the air instead of being fully attracted to the top of the gameboard. Even though I knew why it was floating in the air, it actually still looks pretty impressive. Young children that don’t understand the science behind it will probably be really impressed.

This floating mechanic adds the one interesting mechanic to the game. Swinging Snakes allows you adjust the strength of the “magic” by turning the knob on the base which either lengthens or shortens the string on the snake wheel making the attraction between the two magnets weaker or stronger. At first I thought this was just a gimmick but it actually has a noticeable effect on the strength of the attraction between the two magnets. At its’ strongest point the wheel can support most of the snakes while at a weakest point it can only support about half of the snakes. This mechanic adds some replay value to the game as you are never going to know exactly how many snakes the wheel is going to support.

The biggest problem with Swinging Snakes is that it was made for really young children and it shows. There is basically no strategy to the game. Except for really young children it is very obvious where you should play a snake on your turn since you can tell which side is holding up more of the weight. If you don’t have any young children playing Swinging Snakes, the game comes down to who has to put on a snake when the wheel cannot support any more snakes. Basically all of the players luck into winning/losing the game.

While the game has no strategy the bigger problem is that it is just so boring. Since every decision in the game is so obvious the game basically comes down to spinning and placing a snake over and over again until the game is over. This gets boring very quickly. Outside of playing the game with young children I really can’t see adults getting anything out of the game.

Swinging Snakes was meant for young children though and I think they will enjoy it quite a bit more than adults would. While the rating for this game is based on how it plays for adults, for young children I think you could add a couple more stars to the game’s rating. The game has a recommended age of 4+ but I think the game is more appropriate for ages four to seven or eight. I don’t think the game will work for older children since once you figure out the game’s strategy there really isn’t anything to the game other than luck.

I would say that Swinging Snakes components are pretty average. As I already mentioned I really liked the magnetic components of Swinging Snakes. For a game that is almost 25 years old the magnets actually still work surprisingly well (at least for the copy I found). The rest of the components are typical Parker Brothers though. You basically get the typical cardboard and plastic pieces you would expect from a 1990s Parker Brothers children’s game. There is nothing really wrong with them but they aren’t great either.

Should You Buy Swinging Snakes?

Being a game meant for young children it is not surprising that Swinging Snakes doesn’t really appeal to adults. While the “magic” mechanic of the floating snake wheel is pretty cool there just isn’t much else to the game. The strategy is so simple that the game becomes quite boring as you just spin the spinner and hope that you don’t have to play the snake that adds too much weight to the wheel. While I didn’t really like the game I could see younger children liking the game quite a bit more than me. I don’t really see it appealing to older children or adults though.

If you would like to purchase Swinging Snakes you can find it online: Amazon