To start the game every player takes a horse and the four cowpokes of the same color. One player is then designated to start the bull. Once the bull has started moving, each player places a cowpoke on their horse and flicks the cowpoke at the bull trying to get the cowpoke to stick on the bull. Players continue to flick cowpokes at the bull until the bull stops. Whichever player has the most cowpokes on the bull when it stops moving is declared the winner. 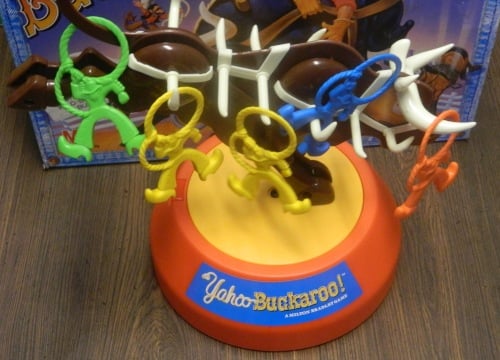 In the above situation the yellow player would win since they have two cowboys on the bull. The other three players only have one cowboy. The blue cowboy still counts as being on the bull even though its’ lasso is not around one of the pegs.

For the most part children’s games are usually only enjoyable for children and maybe some parents if they are playing it with their children. Yahoo Buckaroo! is a little different. The game is obviously geared toward children but adults can get some enjoyment out of the game. I actually had some fun playing the game. I liked the fast tempo of the game where you are trying to fling the cowboys at the bull as fast as possible. It is the type of game that you really don’t have to put any thought into what you are doing and just enjoy the experience. I had some fun for a couple games. Unfortunately Yahoo Buckaroo! gets boring pretty quickly and is not the type of game you would play for an extended period of time.

Yahoo Buckaroo works best with children and adults with young children. The game probably takes about 30 seconds to learn how to play and should be very easy for children to pick up. The game has a recommended age of 6+ but I think children under that age shouldn’t have any issue playing the game. I don’t have any children of my own, but I believe children would enjoy the upbeat tempo of the game and the simple rules.

Overall the quality of the components are pretty good. The electronic component works pretty well even though the button to start the bull usually took a couple presses before the bull started. The cowboys and horses are made of pretty solid plastic and should last as long as they are relatively well taken care of.

The two biggest issues with the game come down to the accuracy of the horses. You obviously shouldn’t expect great accuracy from the horse launchers but they could have been better. You can somewhat control the distance that the cowboys travel by how far you pull back the horse but due to the cowboys not being very aerodynamic the cowboys can fly all over the place. You end up spending around half of the time picking up yours’ and other player’s cowboys. Due to the unpredictability of the cowboys, skill rarely comes into play in the outcome of the game and the winner is usually determined by which player is the luckiest. You are better off just trying to launch the cowboys as fast as possible to increase your odds of a cowboy landing on the bull.

Overall Yahoo Buckaroo! is not a terrible game. Adults can get some enjoyment out of the game but they are likely to get sick of it pretty quickly. Due to the size of the box (it is quite large for a board game) and how quickly the novelty wears off, I wouldn’t recommend the game for adults without young children. Children and parents with young children could have quite a bit of fun with the game though.