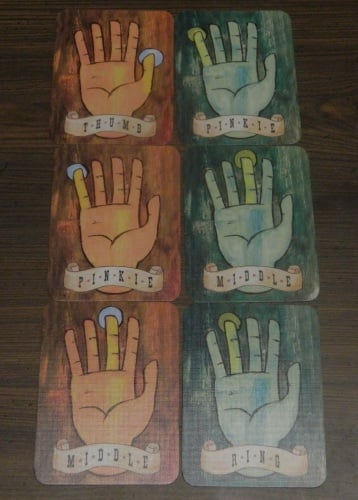 A turn begins with the first player and the player to their left turning over the first card in their deck. Each player looks at the card they just flipped over. Each player will use the finger shown on their card (and only that finger) along with the other player to hold up a ball of the first player’s color. Once the ball is up for a couple seconds, the second player (the player on the left) on the previous turn then plays with the player to their left (while keeping the balls from the previous turns up).

Play proceeds and more balls are added with players having to hold multiple balls up at the same time. When one of the balls fall to the ground the turn is over. That ball is removed from the game, the decks of cards are reshuffled, all the balls besides the one that fell first are returned to their holder, and play begins again. Play continues like this until a situation occurs when one pair of players have no more balls to use for their turn. The balls of each color are then counted, added to each team’s score and the current round is ended. After three rounds whichever team has the most points wins the game. 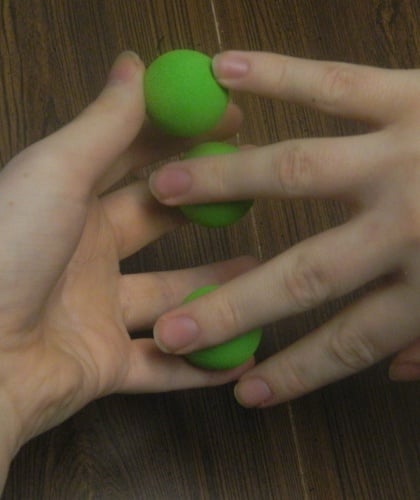 Based on the card combinations in the previous picture, this picture shows how the balls will have to be held.

If you couldn’t tell from the gameplay description, Handy is one of the weirdest games I have ever played. I have played quite a few board games but have never played anything like Handy. When so many games try to rehash old game ideas, it is nice every once and a while to play a game that is truly original and utilizes a game mechanic not used by other games.

Overall I had some fun playing Handy. Generally I am not a huge fan of these gimmicky type of games. Handy is a unique experience though. In order to enjoy Handy though you need to be able to relax and just enjoy yourself. It is far from a serious game and if you take the game seriously you won’t enjoy it that much. If your gaming group has a no nonsense gamer that is unable to let loose, this game is not for you. Handy is the definition of a party game since the game really relies on its’ wackiness.

I played the game with three people total. The game can support up to six players. Based on my experience with three players, I would think the game would be quite hard to play with six players. With three hands the game is already pretty hard to play since it is hard to be able to position your hands in such a way that you can hold the balls with the other two players. After several balls are put into play, the center of the game is already a congested mess of fingers and balls. I can’t imagine how congested it will be with three other player’s hands in the middle as well. While it might make the game harder to play, I am actually intrigued on how the game would play with six players. Balls might not stay up for very long but the game could be a lot of fun since the game will be even more hectic which will feed off the game’s wackiness.

In addition to being a party game, Handy is a dexterity game. Once several balls get into play you will need to twist and turn your fingers in order to get them in position in order to hold the ball with your teammate. Steady and flexible fingers help players but you don’t need to be a finger contortionist either to be good at the game. Young children and adults that are not great at dexterity games can still play the game at a respectable level. Adults will most likely have an advantage over children though since I believe longer fingers are quite helpful.

Unfortunately due to less reliance on dexterity, luck affects the outcome of the game. Handy essentially has no strategy. You don’t get to pick which fingers to use since they are predetermined by card draw. If you get good draws you will get some advantageous positions which are pretty easy to hold a ball with. At the same time you may get finger combinations that are impossible due to the balls that you are already holding. The only real strategy you can employ would be to try and mess with the other player’s hand so they drop one of their balls. With that strategy though you are more likely to drop one of your own balls.

The quality of the components are good which is indicative of most SimplyFun games. The foam balls are of pretty good quality. The cards and ball holders are of a thicker laminated cardboard which should stay in good condition after many plays.

The biggest issue I had with Handy was that I got kind of tired of somewhat quickly. I just don’t see it as the type of game that I would play over and over again. It is a unique experience that loses its’ charm a little too quickly. If you are a fan of these quirky type games, the replay value may be higher than what I experienced.

Overall I thought Handy was a decent game. I had a decent amount of fun while playing the game but I also don’t really see playing the game very often. Handy is definitely not a game for everyone. If you don’t like dexterity games or you think the concept of the game sounds stupid, you will not like Handy. If you need strategy in your games, Handy is also not for you. If you are into dexterity games and the concept sounds interesting to you, I think Handy will be a great party game for you.