If you are unable to play your tile in any of the above ways, you are out of the game.

The winner of No Respect is either the first player to complete all three of their number columns or be the last player remaining. The rules state that completing all three number columns is a rare occurrence which I tend to disagree with since it happened in one of the three games I played. The majority of games will end though due to all but one player being eliminated. 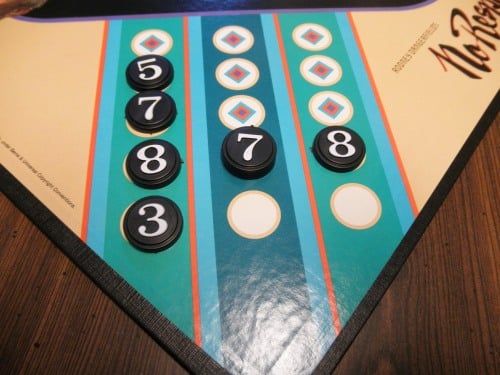 I think it is actually impossible to win the game without at least some luck. In order to win the game you need to draw the right tokens at the right time. Early in the game you need to draw a lot of high numbers in order to give you options with your columns. If you only get low numbers early on in the game you will most likely lose quickly since you will not be able to use your tiles to build up your columns and will end up having to use the discard spots early on in the game.Luck is so important that you could easily go from first to out of the game in a couple turns. If you end up drawing three tiles in a row that you are unable to play you will use up all of your discard spots and you will be out of the game.

The game has a little strategy but there is not much. Strategy is used more to avoid making bad mistakes rather than making moves that will help you win the game. During most of your turns you will either only have one option or there is a very obvious move. In these situations it shouldn’t take more than 30 seconds to a minute max in order to decide on your next move. There is only one situation where you actually have a decision to make. You may have to decide whether you want to play a low number on one of your number columns thus sacrificing that column or if you want to use one of your discard spots. Even with this decision you are mostly just guessing since you have no idea what tile you will pick on your next turn.

If luck didn’t play such a large factor in the game, I actually could see it being a pretty decent game. Having the luck of the draw decide essentially the entire game just takes a lot of the fun out of it. One idea I had that may fix some of the luck issues would be to let each player have a hand of three tiles and they can pick which one they would like to play each turn. This would allow more strategy to come into play and if you picked a terrible tile for your current situation you could keep it in your hand and wait until it is more helpful. I never tested this alteration to the rules though so I can’t verify if it would fix the luck issue or not.

Overall the game’s components are solid. The gameboard is your typical cardboard. The plastic number tiles are not bad especially since the game could have easily gone with card tokens which would have been a lot worse. One thing I actually really like about the plastic tiles is that the numbers are raised up above the rest of the tile so if the white paint for the numbers either fade or chip off you will still be able to tell what number the tile is.

Despite being entirely reliant on luck, No Respect is not a terrible game. I actually had some fun playing the game. If you can get past the reliance on luck you can have some fun with it. The game is also quick to play and easy to learn. No Respect is far from a must play but you could do a lot worse.

If the reason you are interested in the game is because of Rodney Dangerfield, you will not like No Respect since it has essentially nothing to do with the comedian. If you hate games that rely heavily on luck, No Respect will drive you crazy. If you can find a cheap copy and you don’t mind a game that heavily relies on luck, you might get some enjoyment out of No Respect.

10 Days in the USA Board Game Review
Click here to cancel reply.

This game was found sitting in a house, when my friend rented it. It then sat in the basement for several years. We finally got really bored and tried the game....it probably should have stayed in the basement...ha.