In the past I have looked at a lot of word games here on Geeky Hobbies. I have to say that I kind of have a love/hate relationship with the genre. I have no problem playing the occasional word game since they can be fun to play. The problem that I have with the genre though is that there is so little variety which makes most games feel exactly the same. Outside the occasional surprises (Word on the Street, BuyWord) you basically know what you are going to get out of a word game before even playing it. Today I am looking at another word game Word Savvy which I hoped would do something new by focusing on utilizing anagrams. While there is nothing terribly wrong with Word Savvy, the game fails to really differentiate itself from the many other word games on the market.

How to Play Word Savvy

Separate the six decks of cards based on the number on the back of the card. Shuffle each deck of cards and put them into the appropriate section of the box. Choose whether you are going to use the one minute (black), two minute (yellow), or three minute (red) timer. Players also choose how many points they will play to (100, 200, 500). Each player spins the spinner to determine who will start the game. Whichever player spins the highest number gets to start the game.

Each round begins with the current player spinning the spinner. If the spinner stops on one of the bonus spaces the player follows the directions on the space. 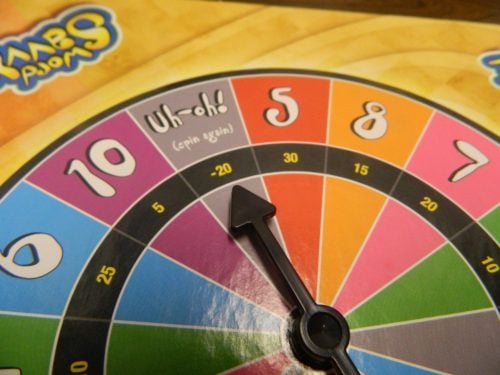 This player has spun the “Uh-oh!” space. The player loses 20 points and spins again.

If the spinner lands on any other spaces the current player will draw two cards from the set of cards that matches the large number that was spun. 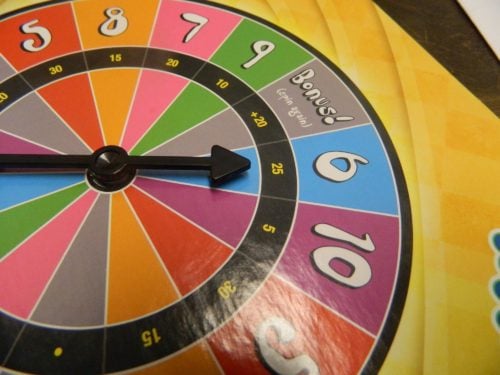 This spinner has stopped on the six space. The players will use two six letter word cards and the winner of the round will score 25 points.

Place the cards word side up in the middle of the table so everyone can see them. Flip over the timer and players will begin forming words. Using the letters from the two words the players form words that are at least three letters long. The players can agree before the game what types of words will be allowed in the game. The one rule with forming words is that a player cannot use an “s” from one word to make the other word plural. 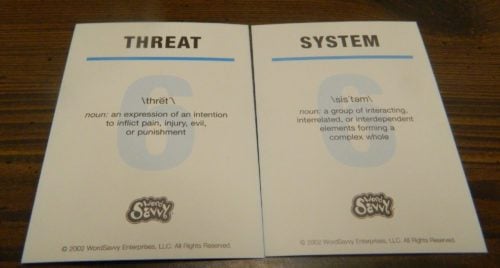 For this round the players will use the words “threat” and “system”. Words players could form include “treats”, “street”, “yes”, along with many other words.

The player who wins the round scores points equal to the small number on the inner ring for the space that was spun. If none of the players have reached the required number of points to win, the next player spins the spinner and another round is played.

A player wins the game when they reach the agreed upon number of points needed to win the game.

My Thoughts on Word Savvy

The basic premise behind Word Savvy is the idea of anagrams. For those of you unfamiliar with what an anagram is, it is basically a word that can be formed by rearranging the letters in another word(s). In Word Savvy you are given two words and must use the letters in those two words to form other words. Despite using the anagram mechanic Word Savvy basically feels like every other word game. You are given a set of letters and need to form words with them. That is basically the premise behind every other word game.

Since it is very similar to every other word game it shouldn’t be very hard to teach Word Savvy to new players. If you have ever played a word game before you should be able to pick up the game within minutes. It may take a couple rounds to get used to the anagram mechanic but there is nothing in the rules that should be hard to remember. Even though Word Savvy is an easy game I disagree with the game’s recommended age of 6+. I think a six year old could understand the game’s rules but I don’t think they will do particularly well in the game. I personally would give the game an age recommendation of around 10+.

While this is the case with basically every word game, Word Savvy is a game where some players seem to be significantly better at the game than other players. This effects most word games since the player that has the largest vocabulary usually has a big advantage. Vocabulary plays a big roll in Word Savvy as well. A more important factor though is that some players are just better with the anagram mechanic than other players. In the game that I played one player won almost every single round. It was pretty obvious early in the game which player was going to ultimately win the game. This is not necessarily a bad thing but I see Word Savvy being a game where a player that is really good at the game will win almost every game.

Outside of the game not being particularly original, one of the bigger problems I had with Word Savvy is that the rules seem to be more suggestions rather than actual rules. The instructions aren’t written well in the first place. After reading them though, it feels like the designer(s) came up with the basic premise for the game and then left it up to the players to ultimately decide how to play the game. In some ways I kind of like this approach but there are other reasons why I don’t like it.

Word Savvy gives you quite a few different ways to play the game. The back page of the rule book includes a bulleted list of different options you can choose to use in the game. These options include:

The most “interesting” option though is determining which player won the round. While I admit that I didn’t try the other options, I think the option of scoring points for different length words is the best option. The problem with just creating the most words is that a player is encouraged to try and form as many three and four letter words as possible. I don’t like the longest word option either since it only rewards creating long words. I like the points option because it combines the positives of the other two options. This option creates an interesting decision between forming a lot of low scoring words or taking time to form longer more valuable words.

The idea of rewarding points based on the length of the words formed actually brings to light the biggest problem that I have with Word Savvy: the spinner. I really don’t like the idea of the spinner since it just seems to add luck to the game without adding anything else of substance. The spinner basically has two purposes in the game. The spinner chooses which cards will be used for the next round. This doesn’t serve much of a purpose since players could just randomly draw cards from the box.

The biggest problem with the spinner is that it determines how many points the winner of a round will receive. The reason I don’t like this mechanic is that it values all of the rounds differently. Using words with five or ten letters doesn’t drastically change how the game is played. With longer words you can form more words but that is the only difference. That is not enough to justify a 25 point difference between some rounds. Add in the spaces where you get free points or lose points and the spinner just adds luck to the scoring. For games based on skill I think it is a bad idea randomly adding luck to the scoring. Instead of using the spinner I would recommend using the point based scoring system and just keeping a running tally of each player’s score after every round.

I have alluded to this several times but I think the biggest problem that I had with Word Savvy is that it is just another word game. While it does a couple new things, it feels like every other word game that I have ever played. While I can’t think of one off the top of my head, I have to believe that there have been several word games made that utilize the anagram mechanic. There aren’t many issues with the rules/mechanics of Word Savvy but feeling like every other word game is a pretty big problem by itself.

When you look at the components for Word Savvy you can kind of tell that the game is self-published. The components aren’t terrible but they could have been better. The game mostly uses cardboard. The artwork is not bad but is kind of bland. I do give the game credit for including three timers. The biggest issue with the components though is that Word Savvy is the type of game that you could easily make your own copy of. Grab a dictionary and randomly pick out words and you can play a basic version of Word Savvy.

Should You Buy Word Savvy?

If I had to describe Word Savvy in a couple words I would say that it is a very generic word game. While I think the spinner is kind of pointless and some of the rules could use some tweaking, there is nothing particularly wrong with the game. The anagram mechanic is kind of interesting even though I am assuming that it has been used by other games in the past. People who enjoy word games could probably get some enjoyment out of Word Savvy. The biggest problem with Word Savvy though is that it is just another word game. When you play the game it just feels like every other word game that I have played.

If you don’t care for word games you probably won’t like Word Savvy. If you like word games and think the anagram mechanic is interesting I think you could have some fun with Word Savvy. Due to the fact that it feels like most other word games though, I would only recommend picking up Word Savvy if you can get a good deal on the game.

If you would like to purchase Word Savvy you can find it online: Amazon