Even though I would consider myself to be a somewhat serious person, I actually like quite a few different types of party games. While party games usually don’t have a lot of strategy they are quick to play and are enjoyable for the most part. There are a couple types of party games that I don’t really care for though. One of these types of games are the “make a fool of yourself” game. These games force you to do wacky/strange things which make you look like a fool while you are doing them. Since Gotcha! was one of these style of games I didn’t have high expectations but when I find a game for less than a $1 at a thrift store I am willing to give it a chance. In the case of Gotcha! my first impression was unfortunately spot on.

How to Play Gotcha!

Place the gameboard and the buzzer where everyone can reach them. Each player chooses a color and places the pawn of that color on the start space. Remove the create your own rule cards and shuffle the rest of the cards. Two cards are dealt to each player. Place all four orange card mats near the gameboard. If there are only three players only use three mats. Whichever player chooses to go first gets to go first.

On your turn you will perform two actions.

When playing a card the player who played it must read it aloud before the rule is enforced. There are three different types of cards. 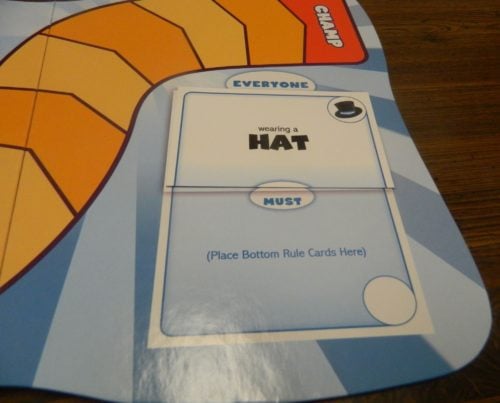 This top rule card will force every player wearing a hat to follow the associated bottom rule. 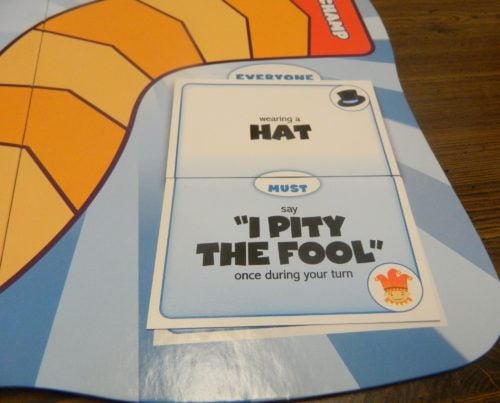 When this bottom card was played it forced all players that were wearing a hat to say “I Pity The Fool” once during their turn.

Individual Rule Cards: Individual Rule cards are placed onto one of the orange card mats and the orange mat is placed in front of one of the players. The player that the rule is placed in front of must follow the new rule. If there are more players than mats in the game, the mats can be moved between players when a new card is added to them. Each player may only have one individual rule in front of them at a time. Whenever a new rule is placed on a mat, it replaces the rule that was previously on the mat. 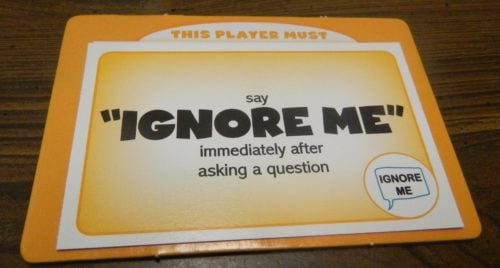 This individual rule card was played in front of a player forcing them to say “Ignore Me” after asking any questions.

After playing a card, play passes to the next player clockwise.

While playing the game a player may break one of the rules that apply to them. If another player catches the broken rule within one turn of it happening, they hit the buzzer. They then have to explain which rule was broken and by what player. If the player did break the rule, the player who hit the buzzer moves their piece forward two spaces. If multiple players were caught for the same broken rule, the player only earns two points total. The player(s) caught move their piece back one space. A player cannot move behind the “Wrong Way” space. 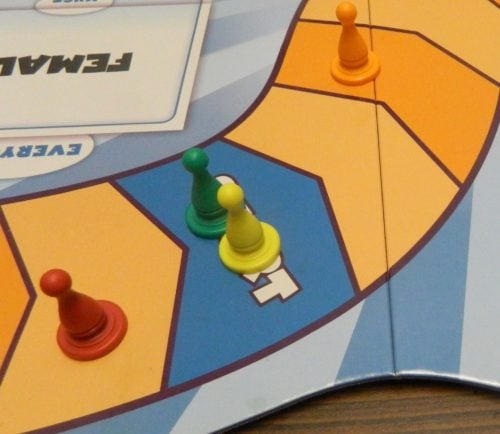 The first player to reach the “Champ” space wins the game. 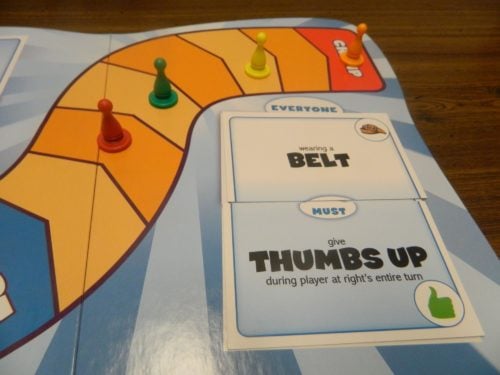 The orange player has reached the Champ space and has won the game.

I would like to start this review by saying that Gotcha is not my type of game. While I like party games, I am not really a fan of games were you mostly just make a fool out of yourself. Gotcha!’s purpose seems to be to apply rules to players to force them to do wacky things. While following your own rules you also have to recognize when the other players break their rules. This is basically all you do in the game. I can see some people enjoying this type of game but it just isn’t for me.

Gotcha! is a pretty simple game as all you do on a turn is draw and play a card making sure you don’t break one of the rules. I can’t see it taking more than a couple minutes to explain the game to a new player. With the game being so simple I am kind of curious as to why the game has a recommended age of 14+. The content of a couple of the cards might be slightly questionable but I have no idea why else the game has a 14+ age recommendation. I think the age recommendation is strange because I actually think children are more likely to enjoy the game than adults. Children who like silly games could like the game quite a bit while the silliness of the game will turn off quite a few adults. In particular I could see Gotcha! working well as a family game for families that like these type of games.

While Gotcha! is really easy to play, I have to admit that I was surprised by how easy it is to break rules in the game. When you first start playing the game you think it will be really easy following all of the rules. While some rules are really easy to follow, others are considerably more difficult. The rules impacting what you have to say and what you can’t say are surprisingly hard to follow. The other players will likely try to trick you into breaking these rules as well. With the rules constantly changing it is also sometimes hard to remember which rules currently apply to you.

I don’t know if this was intentional but I was surprised that there is a little strategy to Gotcha!. The game gives you opportunities to back other players into corners where they have no way to avoid breaking a rule. For example in the brief game that I played, two rules in the game contradicted one another. One of the cards forced players to say “I Pity The Fool” once during their turn. One of the players was also given the individual rule of not being able to say the word “I”. Until one of the rules were changed this player had no choice but to break one of the two rules. I don’t know if I like this mechanic or not since it is kind of interesting that you can trap other players but it also really isn’t fair that you are forced into breaking rules.

Overall I think Gotcha! is a game that people are going to have vastly different opinions on. If you are a more serious gamer that doesn’t really like making a fool of yourself, you will probably hate Gotcha! If you are into these type of games though I think you could really enjoy Gotcha! As I mentioned before I think some children could have a lot of fun with the game. I would look through the cards before playing though and remove the cards that you find questionable. As an adult game I see it working best after some drinks or it could work with quirky groups.

I don’t have a lot to really say about the components. I kind of liked the buzzer even though I can see the sound getting annoying pretty quickly. The other components are pretty basic. The game’s artwork is not bad but not special either. The biggest complaint that I have with the game is that there are not a lot of cards in the game. The game has 110 cards but there are some repeat rules in there and a lot of the cards feel pretty similar. After just a couple games you likely will be repeating cards which could become repetitive pretty quickly.

Should You Buy Gotcha!?

Gotcha! just never really appealed to me. Going into the game I didn’t think I would really like it since I am not a big fan of the “make a fool out of yourself” genre. There is nothing particularly wrong with Gotcha! but it is just not the type of game that I like. The game is easy to play and it is actually easier to break the rules than I initially thought. If you like these type of silly games and don’t mind making a fool out of yourself I think you could enjoy Gotcha! a lot more than I did and thus the game would be deserving of at least a couple more stars for you.

If you are a more serious gamer and don’t like these silly type of games, I would recommend staying far away from Gotcha! If you like these type of games or have children that would like this type of game it may be worth looking at Gotcha! if you can get a good deal on the game.

If you would like to purchase Gotcha! you can find it online: Amazon

Quip It! Board Game Review and Rules
Click here to cancel reply.