At the time of this post I would say that I have played close to 500 different board games. I have played many great games but I have also played some truly awful games. When looking at terrible board games there are a couple things that are usually the main culprits. There could be broken mechanics that ruin your enjoyment. The game’s theme can be offensive. The most likely culprit though is that the game is just really dull/boring. I didn’t have high expectations for Yoo-Doo and yet I was still somehow disappointed.

Place the board on the table. Divide the chips equally between all of the players. Choose which player will go first.

On a player’s turn they will roll all three dice. The player will then put a chip on the space that corresponds to the side face up on all three dice. 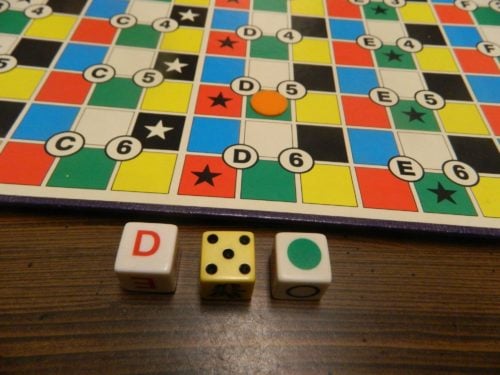 This player has rolled “D”, five, and green. They will put a chip on the D five green spot.

If a player rolls a combination that leads to a space with a star they place their chip on the space. All of the other players must place one of their chips on any unoccupied space that doesn’t have a star. 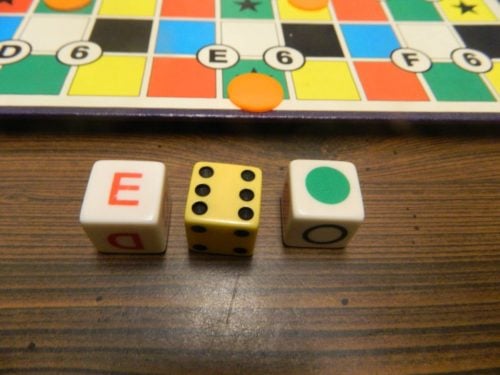 Players take turns rolling the dice until someone rolls a combination that leads to a space that already has a chip on it. When this happens the round ends. The player who rolled the dice last counts up all of the chips on the board and scores those many points. All of the chips are removed from the board and a new round begins. 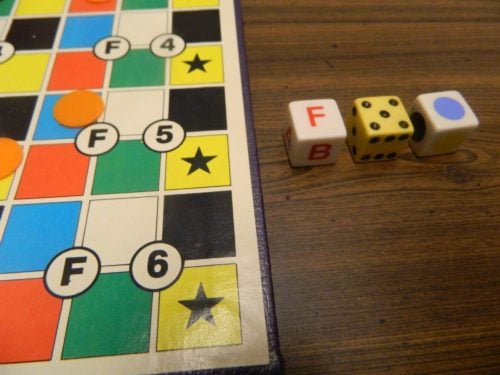 This player has rolled F five blue which already has a chip on it. The player has won the round and receives a point for every chip on the board.

The game ends after five rounds have been played. The player who has scored the most points wins the game.

Basically all you do in Yoo-Doo is roll the dice and place a chip on the space that matches the three things you rolled. There is an occasional opportunity to place a chip on a space of your choice when someone ends up rolling a star space. This decision is utterly pointless though since you can’t apply any strategy to the decision. You have no idea what anyone else is going to roll so you might as well just randomly choose a space to put a chip on. Since you can’t make any meaningful decisions, the game relies entirely on luck and has no strategy.

Yoo-Doo advertises itself as a game of “Infinite Variety” and “Continual Suspense”. I don’t know if the game could have come up with worse words to describe itself. I assume the “Infinite Variety” refers to the fact that no two games will ever be the same. Technically that is true since the odds of ever rolling the same combinations in the same order are astronomical. I wouldn’t call a game where you do the exact same thing over and over again as a game with infinite variety though. The “continual suspense” is accurate to the point that you never know when a round is going to end. Does it really matter though if you don’t care who wins?

With no meaningful decisions and relying entirely on luck, it should come as no surprise that Yoo-Doo is a really boring game. Roll dice and place chips. That sounds really interesting doesn’t it? If you are suffering from a case of insomnia, Yoo-Doo might be the cure you have been looking for. The main point of playing a board game is to have fun. It is not a good sign for Yoo-Doo that it might be the single most boring game that I have ever played.

After playing a lot of games from many different decades, you start to get a feeling of when a board game was designed based on its’ mechanics and how complex the game is. After playing Yoo-Doo it feels like a game that would have been created in the 1950s or 1960s. In the 1950s and 1960s board games didn’t have a lot of mechanics and mostly just relied on rolling dice. If Yoo-Doo was created in that time period I might have been a little more forgiving since most games from that era were pretty similar to Yoo-Doo. The problem is that Yoo-Doo came out in the 1980s. For a game created in 1982 it probably felt outdated when it was first released and definitely feels outdated today.

If the gameplay itself wasn’t bad enough, the component quality is just as bad. Cadaco is not known as a company with great component quality and Yoo-Doo does not change that opinion. The gameboard’s artwork couldn’t have been any more boring and is thin enough that it can warp pretty easily. The dice and chips aren’t anything special either.

While Yoo-Doo is a terrible game, I will say that I appreciated that the game only takes 10-20 minutes to finish. The game’s length can vary quite a bit though. A round can technically last only two rolls or up to 216 rolls. Based on our game most rounds will last around 20-30 rolls. This means rounds should only take a couple minutes if players quickly roll the dice and place their chips.

Other than the game being pretty short, the only other “compliment” I have for Yoo-Doo is the fact that there really is nothing broken in the game. There are no rules which are unfair and ruin your enjoyment. This doesn’t really matter though since the game is so boring. You could try to add some house rules to help Yoo_Doo but I don’t know if there is anything that could actually save Yoo-Doo.

I have a hard time recommending Yoo-Doo to anyone. The game is just so boring. You roll the dice and place chips. That is all you do. There are no meaningful decisions to make in the game as your fate relies entirely on luck. Whoever rolls the right number at the right time is going to win the game. In addition the game’s components are pretty poor. The only two “redeeming” qualities for Yoo-Doo is that it is really short and it technically doesn’t have any broken mechanics.

If you would like to purchase Yoo-Doo you can find it online: eBay