Assemble the game board and place the ball in the center. Each player needs to decide in what order they think they can get the ball to land in the different colored holes. Each player places one of each colored pawn on their side of the game board in the order that they chose starting on the left side. The smallest player starts the game.

A player begins their turn by rolling the die. During the player’s turn the object is to try and get the ball to fall into the hole of the color of their furthest left pawn. The number rolled determines how many moves the player can make during their turn. Players can use their moves to either place a disc along the outer ring or to remove a disc. For example if the player rolled a five they could play five discs, remove five discs, or any combination in between.

Players may place discs anywhere on the outer ring of the game board. The discs can be carefully placed or thrown down as long as the player doesn’t touch the game board. When removing discs, the player needs to use one of the sticks. If any discs fall off the game board during a players turn, they stay off the board until someone uses one of their moves to put them back on. 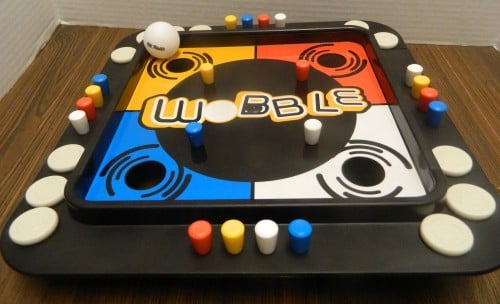 The front player needs to try to get the ball in the red circle. In order to get the ball to move in that direction, they will need to either add discs to the right side or remove discs from the left side.

The players can choose to add the wobble pawns to the game. Whenever a player rolls a one they get their normal move but they also get to take a wobble pawn. The player can either immediately place the pawn like any other disc or they can hold on to it for a later turn. A player can only have one wobble pawn at a time though.

When one player gets the ball into their last color they win the game.

O a recent trip to the thrift store I found the game Wobble. The game looked interesting so I decided to pick it up. I knew it wasn’t going to be fantasic but it looked like it had potential. It also didn’t hurt that it was cheap.

Wobble greatest strength is that it has some interesting gameplay ideas. I know that there are other similar “balancing/dexterity” games on the market but I have yet to play a game just like Wobble. The gameplay relies on having good dexterity while placing/removing the discs. You also need to think through how each piece will affect the tilt of the game board. It takes a little thought to determine where to place/remove discs but it shouldn’t tax your brain too much since the right move is usually pretty obvious.

Wobble is quite easy to learn. It probably takes one or two minutes to explain the game to a new player. The recommended age is 6+ and I think that is about right. Wobble works well as a family game since it is one of those games where children and adults have a pretty equal chance at winning without adults having to throw the game. Younger players should be able to stay competitive on their own as long as they can understand how the board will move when adding and removing discs. Getting used to how the board moves may take a little time for some players.

The game’s mechanic is interesting and could have made for a good game but the game relies too heavily on the roll of the die. If you don’t roll well you will not win. If you roll a 1-3 your turn will be pretty much a waste of time since you have no chance at getting the ball in your hole unless it is already close to it. Each disc you add/remove doesn’t have a large impact on the board by itself. Rolling a 1-3 just doesn’t give you enough moves to make a real impact on the game board. You are probably better off trying to mess with the other players.

I do applaud the game for fixing this problem a little with the wobble pawns. I would highly recommend using them when playing the game. The wobble pawns allow a player to offset their luck of rolling a one by giving them a pawn they can use on any future turn. Generally speaking you don’t want to use the wobble pawn until you roll a large number and the ball is close to going in the hole you want it to. If you use it right away you are going to end up wasting it. The game is really lacking in rules for the wobble pawns though. The rules don’t mention anything about removing the pawns from the game board and what happens when someone rolls a one and all of the pawns are still on the game board. Our group decided that whenever anyone rolled a one and there were no available wobble pawns, the player was allowed to take one of the pawns off the game board for themselves.

If you roll well (4-6) you actually have a chance at getting the ball into the correct hole but it is still unlikely. To get a ball into your hole you need to get lucky. A game of Wobble tends to have a lot of back and forth. During the game situations will arise when at least two players end up needing colors on opposite sides of the board. This creates a problem since these players will pretty much waste their turns offsetting one another. One player will move the discs to one side in order to get the ball to roll to their next color. The other player will end up reversing everything putting the discs back where they originally were. This goes on and on until one player is able to out roll the other player and gets to move more discs.

This problem allows multiple players to “gang up” on another player without even trying. Let me explain. At one point in the game I played, three of the four players were all trying to get the same color. Meanwhile I was trying to get the color on the opposite end of the game board. I stood no chance of making any progress until at least one player got the color they were trying for. The only way I could have had any impact would have been if I out rolled the other three players combined. This was obviously not going to happen so I had to waste a bunch of time just waiting for the other players to finally get the ball into the hole.

This “ganging up” mechanic just shows that other players seem to have more impact on your game than you do yourself. If you are playing with more than one other player, by the time it becomes your turn, all of the progress you made on your last turn is likely to have been reversed by the other players. It feels like your moves have no real impact on the game.

This back and worth makes the game last longer than it should. The game I played probably lasted around 45 minutes when it should have been closer to 20-25 minutes. The game just drags on and by the end everyone was happy that the game was over. The game gets quite boring when nothing is happening. At one point in the game I think it must have taken at least 20 minutes just to get the ball to fall into the hole I was trying for.

Luck also seems to come into play based on how many discs are available at the beginning of your turn. This is due to my belief that placing a disc has a greater impact on the board and it gives you more control than removing a disc. I think this is due to being able to choose exactly where you want to place the disc and how hard you want to place it. If you are lucky and have more available discs at the beginning of your turn, you are likely to be able to impact the board more than a player that has to take more turns removing discs.

The one area of the game where there could have been the ability to strategize is at the beginning of the game when you pick your order of the colors. After playing the game I think this decision is just a random guess. You have no idea how the game is going to play out. This just adds another element of luck to the game where you hope that you are lucky enough to have other players trying for the same colors at the same time that you are.

Finally I was actually kind of surprised with the components. The component are far from fantastic but they are all made of a pretty thick plastic so they should be pretty durable as long as they are taken card of.

Wobble had potential but it is just not that good. The game has some interesting ideas that could have made for a good game. Unfortunately the game too quickly becomes a game of back and forth where one player makes a move and another player pretty much reverses that move so no real progress is done. This leads to the game lasting about twice as long as it should have. Luck is also the determining factor of who ends up winning.

I can’t really recommend Wobble to a lot of people. If you don’t like the dexterity/balancing genre don’t pick up Wobble. If you do like the genre though you may get some fun out of the game if you can look past the game’s back and forth game play. If you can find the game for cheap it may be worth picking up.