Toss Your Cookies is a 2007 Gamewright family set collecting card game that also includes a few dexterity elements as well. The goal of the game is to collect five of the same type of cookie cards plus the milk card. Cards are passed, swapped, and tossed up for grabs based on the roll of the dice until someone has the six cards they need to win. 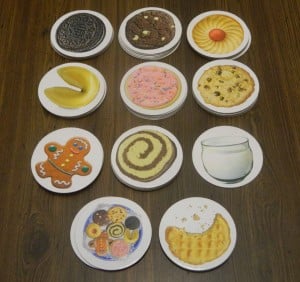 For setup, sort all of the different cookies into separate stacks and have each player pick out one type to play with. Put the rest in the box. Add in the milk card and the correct amount of wild cards and half-eaten cookies and mix up all the cards you are playing with.

After all of the cards have been added, turn them all face down and thoroughly mix them up on the table. Each player should select seven cards and put them into their hands (no cards should be left on the table once this is completed). The game starts with the player who most recently ate a home-baked cookie and play continues to the left. On each turn, the current player rolls both dice and does the action indicated by the roll.

One of the dice decides the action the roller will take (from here on referred to as the action dice), while the other (which I call the amount dice) indicates how many or which cards are affected (1, 2, 3, all, or just the milk card). The possible actions you can roll include swap (you choose any player and swap the number of cards indicated by the other die with that player), pass left (all players pass however many cards the other dice says to the player on their left), pass right (the same only to the player on your right), and toss (all players toss the number of cards indicated by the die face up onto the table and after a count of three everybody grabs the cards they want). For toss, players can only grab an amount of cards that will bring them back to a seven card hand. If someone ends up with less than seven cards, they determine who has the extra card and can look at and take whatever card they want from their hand. 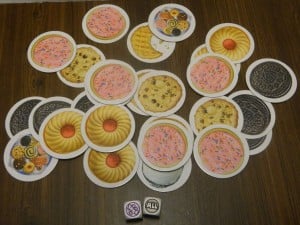 This is how crazy an “all toss” roll can get. All players must grab seven cards (ideally the milk, wild card(s), and as many of the same type of cookie as possible) and avoid getting scratched by someone’s nails.

Wild cards count as any type of cookie card you wish (but obviously can’t be used as a milk card). Half-eaten cookie cards are worthless and just waste a spot in your hand. The first player to gather five of the same type of cookie (wild cards can be included) and the milk card shouts “Snickerdoodle!” and wins the game. 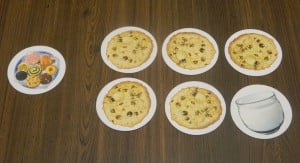 This player has gathered five of the same type of cookie and the milk, which is what they need to win the game. They also could use their wild card (the card on the left) as one of the five cookies if needed.

Clearly, Toss Your Cookies is not exactly a serious game. It’s a silly game which is pretty much completely luck-based. The only “strategies” the game even has are to hang onto as many of one type of cookie as you can and try to grab wild cards and the milk card when they are tossed (both of which are extremely obvious “strategies”).

However, Toss Your Cookies is exactly the type of game children will enjoy (and it’s a fun enough game that even adults might not mind playing it with their kids). The game is very easy to learn (although you will probably have to check the rules to see what you do with certain rolls since it is hard to remember them all) and since the games take at most 15 minutes (usually a lot less), it should keep your kids’ attention. While the game says ages eight and up on the box, I actually think most children even a few years younger should be able to play Toss Your Cookies without any problems.

Toss Your Cookies can accompany up to eight players. While I only played with four total players, it’s pretty obvious that this is a game where more players really helps make the game better. I can’t even imagine how chaotic an eight-player all toss would be. Even with just four players, our all toss rolls were crazy and quite a bit of fun. However, while fun, all toss rolls kind of mess up the game’s mechanics. The battle over the milk and wild cards is furious and fun but after those are gone, all players are just going to grab as many of one type of cookie as they can (meaning a lot of times someone is going to win right then and there or at least just be one or two cards away from winning). Except for players who wound up going for the same type of cookie as someone else, all players should be one or two cards from winning after an all toss. An all toss should only happen on 1/18 of all rolls though so this shouldn’t end too many games prematurely. However, tossing at least one card happens on one-third of rolls so you definitely need to have quick reflexes to win the game. Make sure to clip your nails before playing or someone could wind up shedding blood.

Obviously, there is a lot of luck and randomness to Toss Your Cookies. It’s a set collecting game but the game really comes down to your dice rolls and reflexes (for when cards are tossed). You can be close to winning and have to give up your awesome hand to the player on your left or right if they (or you) roll a swap all, giving them a likely win. Only the player with the milk can win so if you can’t get that card or constantly lose it, you aren’t going to win. You just need to hang on to as many of one type of cookie as you can and hope you get lucky enough to get what you need to win.

One area I have to give a lot of props to Toss Your Cookies for is the quality of the components and the art. The cards are very solid, sturdy, and pretty large, which is good since this is the type of game where it would be very easy to rip or bend the cards while fighting for them. The dice are very high quality and nice-looking. The art on the box and cards is awesome and very appealing to children. The cards are drawn so well that the cookies on them look almost real. They will definitely make you wish for some nice home-baked cookies afterwards.

Even though Toss Your Cookies has next to no strategy or skill (quick reflexes do help though), it is still quite a bit of fun to play. None of the players in my game are children but we still reasonably enjoyed playing the game. However, I probably wouldn’t recommend buying it (unless you can get it for a few dollars at a thrift store) unless you have children to play it with. They are the game’s target audience and will definitely get the most enjoyment out of the game. Adults probably won’t mind playing it with their kids but the game is basically all luck and little to no strategy or skill.