Before the game begins every player takes one of the goal cards at random. The color/building shown on the card is the type of buildings they are supposed to protect during the game. 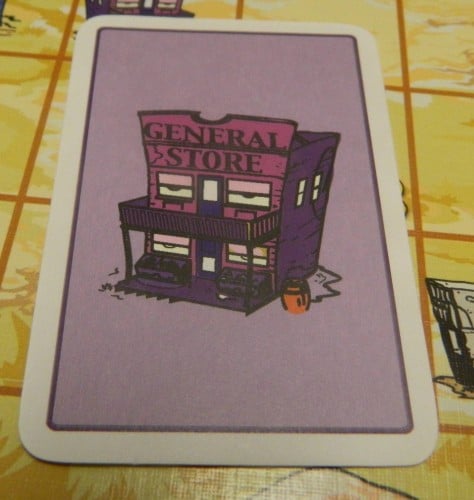 This player has chosen the purple general store. The player needs to protect the general store buildings in order to get points at the end of the game.

Before the game starts a work gang figure is placed in each of the four corners of the game board. Each player also gets a set of eight vote cards (each set is indicated by a different symbol on the back). Finally all of the tiles are shuffled and each player gets a specified number based on how many players there are.

During a player’s turn they play one of their tiles (if they can). Each tile has a start and end edge. The start edge is indicated by some form of transportation like a boat or a train. A player can only play a tile that connects with another tile of the same type (road to road, railroad to railroad, water to water). The player plays the tile so the starting edge is connected to last tile played in that path (indicated by the work gang figure). A tile may not be played if it will overlap a tile already played on the game board. If no tiles have been played in one of the four corners a player can choose which side they would like to start the path. Once the tile has been placed the work gang token is moved to the end of the path to show the players where the last tile was played. If once the tile is played there are no other places where a tile can played, the work gang token is removed to indicate that no more tiles may be played on that path. 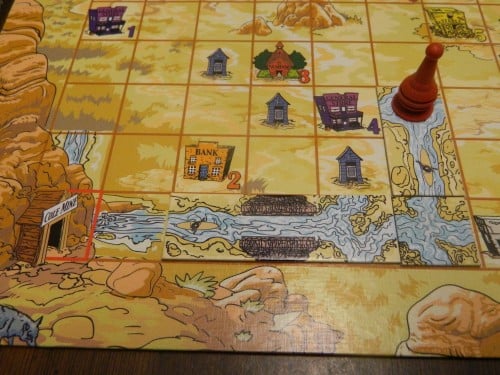 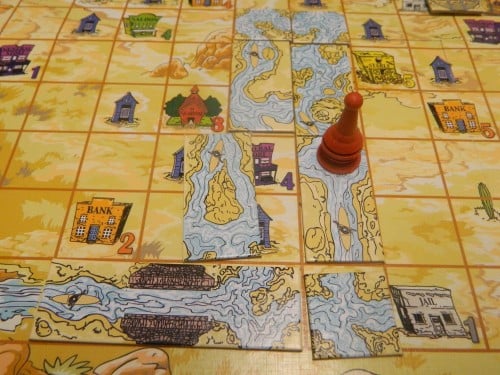 The player protecting purple tried to redirect the river but failed and another player has played a tile over the purple general store. Since the tile goes through an outhouse though, the tile placement is put up for a vote.

In most cases tiles can be played with no intervention by the other players. If the tile played covers up an outhouse though, the tile placement must be put up to a vote. Players use their voting cards to vote for or against the placement of the tile. Players can play one or more vote cards face down for each vote. The green cards with plus symbols in the corner are equal to as many yes votes (to place the tile) as there are “+” symbols. The red cards (-) cards are worth as many no votes (block tile from being played) as there are “-” symbols in the corner. The joker card is yellow and shows ++/–. This card can be used as either two yes or two no votes. Finally there is the “?” card. This card is the “I Don’t Care” card and doesn’t count as a yes or no vote. 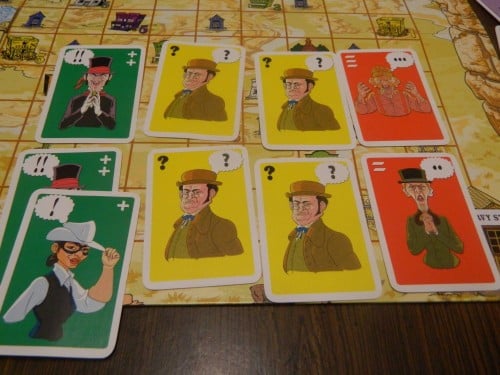 If a path touches a bridge space (the center space of a three tile piece), that path can continue on the other side of the bridge. 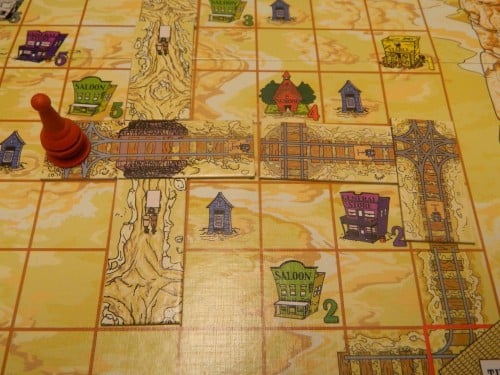 In this scenario a road path has been placed underneath the railroad bridge.

The game continues until no one is able to play another tile. Each player then reveals their secret color/building and count up the numbers on their buildings that weren’t destroyed. Whoever has the most points on the board wins the game. If there is a tie, whoever has the most vote yes and no symbols left on the cards in their hand wins.

The majority of the gameplay in Wacky Wacky West is a tile placement game where you snake the various paths through the town trying to destroy as many of the buildings as you can (that aren’t yours). The tile placement mechanic is not much different than other similar games but it is still fun. It is satisfying destroying the high valued buildings of the other colors. There is a decent amount of strategy to the tile placement as well. If the other players are closing in on one of your buildings you can usually do quite a bit to reroute the path away from your building. In the early game there are a lot of possibilities for placement so you may want to impose a time limit on moves or players who suffer from analysis paralysis may drag the game along.

When placing tiles you also want to try and avoid placing your tiles on the outhouse buildings. Whenever you place a tile over an outhouse building a vote is conducted to decide whether the tile can be placed or not. The voting process has quite a bit of strategy/bluffing in it. Generally speaking if your building is not being destroyed, you don’t care if the tile is going to be placed. You may want to still vote it against it though in order to get the other players to think that you are protecting your own color.

When your building is about to be destroyed you have an interesting dilemma. First you can strongly oppose the placement saving the building and your victory points. This will tip off the other players though and they will attack your buildings in future turns. Due to players generally voting down placements that affect their buildings, you can usually use this to your advantage. You could purposely place tiles that go through outhouses and high value buildings just to see how players vote. In order to protect their own buildings they may tip their hand and you can quickly find out what color someone is protecting.

This need to protect your own buildings does lead to one of the problems with the game. For the most part it is pretty easy to figure out what colors other players are protecting. If someone is heavily protecting a certain color/building, it is likely their building. As the game reaches the end you also tend to figure out what buildings are not being protected by other players since they tend to have no buildings or very few buildings left. Even if those colors are being protected by one player, they are so far behind that they won’t win anyway.

The voting cards also add strategy to the game. Since you can only use every card once except for the “?” card you need to do a good job managing your vote cards. Use your cards too early and you won’t have any votes to impact the late game. If you don’t use the vote cards though you could end up losing votes that you would have otherwise won. Your ability to bluff the other players really comes into play with your use of voting cards.

While it doesn’t really impact the game play at all, I thought Wacky Wacky West’s theme was very well done. The game does a good job with the wild west theme. The artwork is well done and does a good job reinforcing the theme. The “outhouse” rules do a good job emphasizing the “wacky” part of the title. The game doesn’t take itself very serious. The instructions humorously tey to explain why the citizens of Rossdorf for some reason need to hold a vote before any outhouse in town is torn down. If the wacky theme behind the game amuses you, I think you will really enjoy Wacky Wacky West.

Wacky Wacky West is a fun game. The game has plenty of strategy but it is also quite accessible. The game only takes a couple minutes to learn and lasts around 30-45 minutes. A player’s first game may take a little longer than usual as the player is adjusting to the game but the game quickens when everyone knows what they are doing. As long as you don’t over analyze the game too much, you should have fun with the game.

Other than it being pretty easy to figure out what building the other players are protecting, the other problem with Wacky Wacky West is that you need to be lucky in order to win the game. Luck comes into play from tile selection and from the moves the other players make.

I actually think tile selection at the beginning of the game can have a crucial impact on the game. Generally speaking you want an pretty even distribution of all of the different types of paths. You probably want a little more railroad tracks since there are two railroads and only one river and one road. Problems start to arise when you have too many tiles of one type and not enough tiles of another type. In a recent game I ended up with about three road tiles. I needed to use the tiles pretty quickly to prevent one of my high value buildings from being destroyed. For most of the game I no longer could impact the road path so I was at the mercy of the other players.

I can see why the game wants to randomly give out the tiles. By being randomly distributed no player has the exact same set of tiles. I think that each player should get at least one triple, double and single tile of each type. The rest of the tiles could then be randomly selected in order to add some randomness to the tile selection process. By giving each player at least three tiles of each type, it lets each player have some flexibility in choosing how they would like to move the paths. With the selection process being random, it is possible (although highly unlikely) that one player could end up getting no tiles of a particular type which would not allow them to impact the path at all.

The components are for the most part very good. As already mentioned I really liked the artwork as I think it adds to the charm of the game. The vote cards are designed in a way that it is very easy to tell what value the card is worth. I wish the work gang figures were more than just normal red plastic pawns but since they only serve as an indicator of the last tile played that isn’t much of an issue. The tiles are made of a thick cardboard and should last if taken care of.

Overall Wacky Wacky West is a great game. The game is accessible but also strategic at the same time. The game has a good theme and it is just a fun game. Wacky Wacky West’s only real issues come from it relying too heavily on luck. If you don’t hate either tile placement or bluffing/bidding games I think you should enjoy Wacky Wacky West quite a bit.