The objective is to be the first player to reach the finish space.

Each player is given a pad of answer sheets and a writing utensil. Players pick a pawn and place it on the start position of the game board. Everyone rolls the die to determine who will be the first reader. In future turns the reader position will move in a clockwise fashion. 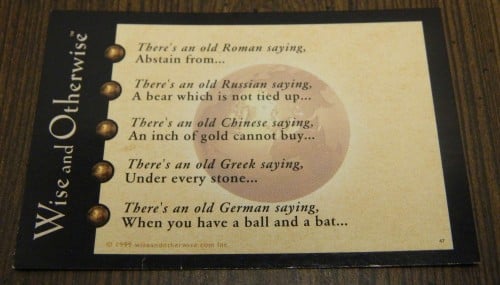 If the reader chooses the second phrase all of the players would have to come up with an ending to “A bear which is not tied up”.

After everyone has turned in their answers, the reader mixes up the submitted answers with the correct answer. The reader reads all of the answers assigning a number to each answer. Starting with the player to the reader’s left, each player announces their choice for which answer they think is the correct ending to the phrase. In order to throw off the other players, a player can choose to vote for their own answer even though they know it’s not correct answer. 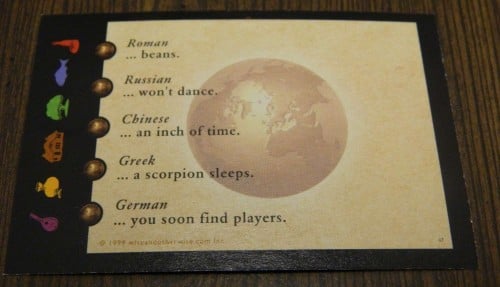 The correct ending to the phrase in the previous picture is “won’t dance”. Whichever players guess the correct answer get two points.

The reader reveals the correct answer and points are awarded as follows:

Players move their pawns forward the number of spaces equal to the number of points earned. The player to the left of the previous reader, becomes the reader for the next round. 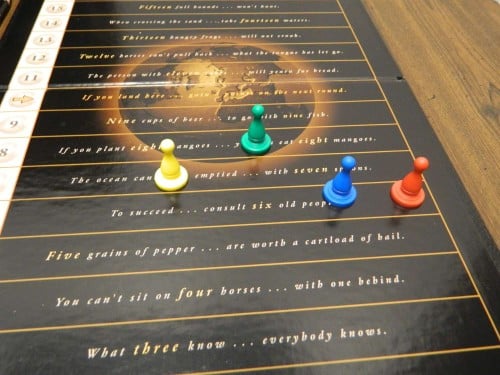 When a player reaches the finish line, the game ends. All players get to move their pawn based on the points earned in the last round. If two or more players reach the finish on the same turn, whoever earned the most total points wins the game. If the tied players earned the same number of points, they share the victory.

Starting as a parlor game, Fictionary/The Dictionary Game has been around for quite a while with many variations being made over the years. The most popular variation is the game Balderdash. The main mechanic in these games is for one player to act as the reader who picks a word/card. All of the other players write their own definition for the word to try and trick players into picking their answer. Players then vote on the answers with players earning points for guessing the correct answer or tricking other players into picking their answer.

Due to the popularity of the game, plenty of people have tried to create their own games with some type of twist. One such game was The New Yorker Cartoon Caption Game that we looked at a while ago. Today we are looking at Wise and Otherwise which decided to combine the mechanics from Balderdash with old phrases/sayings. When I picked up the game I was curious on how well it would work. I generally like these types of games but I didn’t know how well it would work with phrases. While the game is not perfect and won’t work with uncreative players, Wise and Otherwise is still a fun little bluffing game.

It’s Time To Spread Some Wisdom

The main mechanic in Wise and Otherwise is to create an ending for an old phrase that is wise/clever enough that other players will actually believe that it is actually a real saying. Since a lot of the phrases are really old, this is actually a lot easier than you would expect. While you need to be careful not to reference anything modern, you can actually make pretty compelling endings without a lot of work.

Wise and Otherwise is not for uncreative people though. Uncreative people will have a lot of trouble with the game. These old phrases are strange so if you can’t think of something creative, it is going to stick out. In none of the players can come up with something creative, the correct answer will be pretty obvious which makes the game pretty boring. To fully enjoy the game you really have to play it with people that are at least moderately creative. A lot of the phrase beginnings are set up in a way that you have a lot of flexibility in what you can add as the ending to the phrase. A creative person could make the game really enjoyable.

Like a lot of these types of games though, Wise and Otherwise works better as an experience than as a game. For the most part the game board is stupid and pointless. The game should have just had players score points and whoever scored the most points would win. This would have gotten rid of the stupid rule that a player gets three free spaces just for being lucky and landing on the 10th space.

The scoring system could also use some improvements. The reader has few chances to score points in a round. In the game I played only one or possibly two rounds ended with no players guessing the correct answer. I think this happens since if only one player comes up with a clever answer a lot of the players may vote for it but the person who came up with it is unlikely to. Allowing the reader to create an answer might solve some of these problems since the reader could then at least score points if one of the other players voted for their answer.

That Can’t Be Real

One of the main reasons that Wise and Otherwise works so well is that the designer(s) did a great job finding obscure and strange sayings from all around the globe. While the game has a rule in case someone actually knows one of the phrases, I highly doubt it will ever be used. Most of the phrases are so old and strange that very few people have probably ever heard of them.

To demonstrate I would like to refer to the strangest phrase I encountered while playing the game. This is an actual Icelandic saying: “Don’t open your mouth until a goose has flown in.” That phrase is so random that I would love to find out where it came from and what in the world it is supposed to mean. If anyone knows I would love to hear about it in the comments.

Wise and Otherwise is a pretty good game. If you have creative people to play the game with you can have quite a bit of fun with the game. Despite having to complete phrases, the game’s mechanics work better than I was expecting. This is due to some of the weirdest phrases I have ever heard most of which I would never have thought were actually real.