Set all of the cats in the center of the table. Shuffle the cards and deal two face down to each player. The rest of the cards form the draw pile. The youngest player gets to go first.

After getting a new card the player sees if they have three cards that match the three pictures on one of the cats in the middle of the table. If the player has the matching cards they discard the three cards and take the corresponding cat from the middle of the table. This cat now belongs to you and no one can steal it from you. When you take a cat you also get an extra turn. If the player is unable to take a cat, their turn ends. 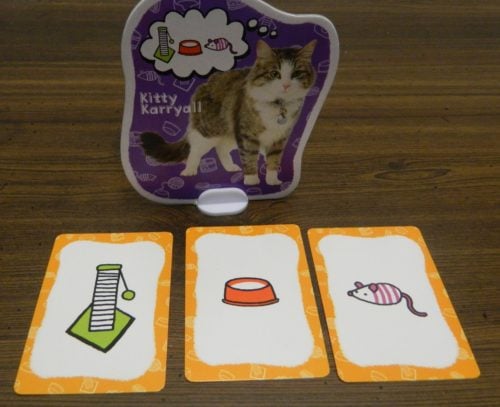 If the draw pile ever runs out of cards, the discard pile is shuffled and becomes the new draw pile.

The game ends when all of the cats have been taken by one of the players. The player with the most cats wins the game.

In Kitten Caboodle you and the other players are trying to adopt as many cats (not kittens as the title implies) as possible. Players need to acquire cards of the different items that the cats want. Players acquire cards by asking for them from other players or by drawing cards from the draw pile. If this sound a lot like Go Fish, it should since it is very similar to Go Fish that you could call Kitten Caboodle, Go Cat.

While it is hard to believe that Kitten Caboodle is worse than Go Fish, it is worse for one reason. In Kitten Caboodle you can only ask for one card during your turn no matter if you got a card from the player. In Go Fish you can keep asking for more cards if you get a card from another player. This allows players who make good guesses to get a lot of cards in a turn and develop a lead over the other players. The fact that you can only get one card each turn makes Kitten Caboodle an exercise in futility. If you take an item from another player and it doesn’t complete a set of cards to claim a cat, the player you stole it from or any other player can just take it from you on their turn. Cards keep moving from player to player until one player has all of the cards needed to meet one of the cat’s needs.

Taking cards from other players becomes pretty pointless unless it completes a set because if players just keep stealing cards from one another, no one makes any progress towards actually taking any of the cats. This makes you want to purposely guess wrong in order to draw a card from the draw pile. This is beneficial since the card you draw might be the card you were looking for and since no one else knows what it is, it won’t be so easy for the other players to steal.

So why doesn’t the game let you keep asking for cards until you guess wrong? Well that would help some things but I think it will create its’ own problems. The problem is that there are only seven different items in Kitten Caboodle. In Go Fish there are more options. With only seven different items it is a lot easier to guess what cards other players hold. If a player could just keep guessing when they got one right I could see one player taking control of all of the cards in the game. When the player guesses wrong, the next player will just steal all of those newly acquired cards since they know that they own them.

Kitten Caboodle has all of the problems of Go Fish and creates some of its’ own issues which is why I think it is worse than Go Fish. The game is almost entirely reliant on luck since you need to guess a player’s cards correctly or draw the cards you need in order to win the game. There is very little strategy in the game so it probably won’t keep the interest of adults for very long. The game will probably appeal more to children though.

One rule change that I think would improve the gameplay would be to allow players to take cats from other players. I know that this totally contradicts the theme of the game where you are adopting cats since this would mean that you are stealing cats from the other players. I think this would make the game better though since it would add a little more strategy to a game that has next to no strategy. Players would get more choices on which cats they wanted to go after and players would have to decide if it is better to go after a cat that is still available or try to take a cat from another player. Players would also have to try and protect their cats from being stolen.

Component wise the game is not bad. The cardboard cats are pretty good since they are pretty thick and the game could have just used normal cards to represent each cat. The artwork is solid and makes the game quite accessible since you only need to match the symbols on the cards to the cats.

Kitten Caboodle is a borderline broken game. It is essentially Go Fish but worse. The biggest problem with the game is that it is pretty much an exercise of passing cards around the table. Players keep stealing cards from one another until one player has the required cards to take one of the cats. While it will probably be better for young children, Kitten Caboodle is just not that fun due to the flawed gameplay.

I really can’t recommend Kitten Caboodle to that many people. If you really like cats you will probably get more out of the game than I did. Also families with young children who really like Go Fish may also enjoy the game. I would only recommend picking up the game though if you can find it really cheap.

If you would like to purchase Kitten Caboodle, you can purchase it on Amazon here