A couple weeks back I took a look at the Where’s Waldo? Waldo Watcher card game. I was a pretty big fan of the Where’s Waldo franchise when I was a kid. Despite this I was disappointed with the game even though I didn’t have high expectations for it. The main problem that I had with the game is that it just felt like the bare minimum was done in order to try and cash in the popularity of the franchise. This lead to a very basic search and find game that became boring pretty quickly. Well today I am looking at another Where’s Waldo? board game released the same year as Waldo Watcher. After the disappointment of the first game I have to say that I didn’t have high expectations for the Where’s Waldo? World Game even though it looked better than the other game. One look at the spinner filled with a bunch of characters made that perfectly clear as you are searching for more than just Waldo. This idea looked interesting as you had to find individual characters hidden among a total of 101 characters. Where’s Waldo? World Game is a fun little game even if it is a pretty basic find the hidden object game. 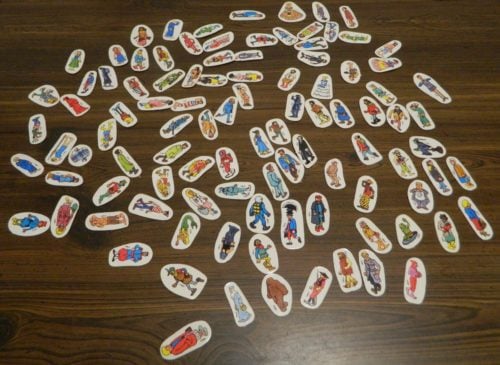 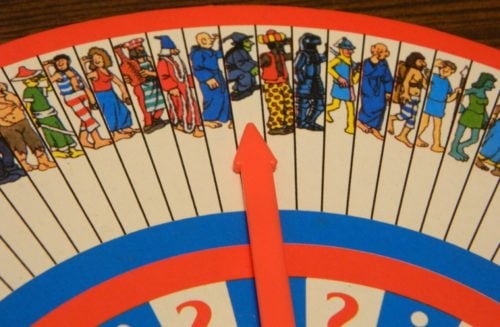 The player has spun the witch. All of the players will now race to try and find the witch character card. 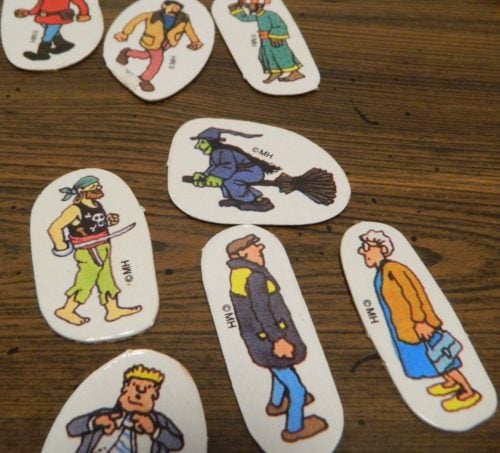 Based on what was spun in the previous picture the players are looking for the witch. The first player to find this witch will point it out and take it to score a point.

If none of the players find the correct character before the timer runs out, the round ends with no player being able to claim the character. The next round begins with the player to the left of the current player spinning the wheel to get a new character to find.

The game will continue until one of the players collect five characters. That player will win the game.

This player has acquired five characters so they have won the game.

As the whole game basically entails spinning the spinner and finding the associated character it is no surprise that the game is really easy to play. I honestly think I was able to explain the whole game in around 30 seconds to a minute. The game has a recommended age of 3+ after all. I think that may be a little too low, but young children should have no problems playing the game. This simplicity means that the game plays quickly as well. Unless players have a hard time finding one of the characters I would say that most rounds should take at max a minute with maybe half of that being the actual search for the character. I thought it would be hard to find one character hidden among 100 others, but it was surprisingly easier than I was expecting. Following the rule that you only need five characters to win I could see most games ending in around ten minutes. With so many unused characters each game and games being so short I personally would recommend having players find more than five characters in order to win.

I had mixed feelings about the Where’s Waldo? World Game before playing it and I would say that the game somewhat surpassed them. I don’t know exactly what it is, but the game is more enjoyable than I was expecting. I have always liked the search and find hidden object gameplay that is utilized by the game. The game doesn’t really innovate the genre at all as it is a very basic game. Yet for some reason I still liked the game as there is just something really enjoyable about finding the characters before the other players. Unlike Waldo Watcher where you just have to look at small cards to find the character, in Where’s Waldo? World Game the characters will be spread out over the entire table. This makes the searching more challenging and thus more enjoyable. The game is meant more for younger children and I think they could really like it. I think adults can enjoy it as well.

With a game that is so simple you always have to worry about the game becoming repetitive pretty quickly. In some ways Where’s Waldo? World Game can become repetitive, but it does a better job mixing things up than I originally expected. On the positive side every game should be different. All of the characters are randomly displayed on the table so the characters will never be displayed in the same way twice. As there are 101 spaces on the spinner the odds of you spinning the same characters often is also pretty limited. This adds some variety to the game as no two games will be the same. The problem is that the gameplay is so simple that the mechanics do get repetitive after a while. You can only play the game so much before it feels like you are doing the same things over and over again. This is why I would classify Where’s Waldo? World Game as one of those games that you play a couple times and then put it away for a while before you bring it out again.

Other than the game becoming repetitive after a while, the biggest problem with Where’s Waldo? World Game comes from the pictures on the spinner being way too small. I will admit that this was somewhat unavoidable as you had to fit 101 characters on one spinner. The problem is that the characters are so small that it is hard for all of the players to see the chosen character on the spinner at the same time. The instructions say that you should place the spinner where everyone can see it at the same time. Unless players are willing to lean over the table or you use a really small table this is not really an option though. Instead you are basically forced to spin the spinner and pass it around to all of the players. As players have to take turns looking at the spinner you have to implement a house rule where players can’t look at the character cards until all of the players have looked at the spinner. This makes the game take longer than it probably should but I don’t really see another option where all of the players can get a good look at the spun character.

This leads me to the components which are decent but could use some work. I thought the timer was pretty good as it is durable and works well. In addition to the characters being really small, the spinner itself doesn’t even work that well. It could be due to use but the spinner for my copy doesn’t seem to spin that well. Despite the odds we kept spinning characters in the same region of the spinner and actually spun the same character at least once. The character cards seem to be taken directly from the book pages but they were cropped out unlike Waldo Watcher. The artwork is pretty good for this reason. They are made of somewhat thin cardboard though so they are prone to creases. I also found them to be a little on the small side. Basically the components do their job but could have been better.

For a game that relies on finding hidden objects there is more luck to the game than you would expect. The best searcher will usually be the first player to find a character but there are other factors involved as well. As the characters will be spread out around the table some characters will be closer to some players than others. If a character is located closer to you than the other players you are more likely to spot them before the other players. Where you choose to search first can also have a big impact on the game. Players that do a good job randomly guessing the area that a character is located will have a leg up on the other players. There were times in the game where players found a character almost immediately because they chose the perfect area to start their search. With some characters being considerably easier to find than others, due to their smaller size or distinct look, it will be hard to find a character before the player that chooses to search the correct area first.

Where’s Waldo? World Game is at its core a very generic search and find game. You spin the spinner and try to find the character that was spun before the other players can. That is basically all there is to the game. This means that the game is really easy to play where children of almost any age can play it. Despite how basic it is I actually had more fun with the game than I was expecting. The mechanic of trying to find the different characters is fun. As that is all you do in the game though it becomes repetitive after a while. Basically it is one of those games that you play for a while and then put it away for another day. Other than the repetitive nature the game’s components let the game down and it occasionally relies on a little too much luck.

Walt Disney Company Documentaries: The Complete List and Guide to What to Watch