First published back in 1987, Where’s Waldo? (known as Where’s Wally in UK) was a series of books featuring large pictures filled with a bunch of characters and objects. Basically the premise of the books was naturally to find Waldo/Wally and some other characters hidden among all of the other characters and objects. The series eventually spawned seven different books and inspired a bunch of knockoffs along the way. Growing up in the 1990s I was a big fan of Where’s Waldo? where I had quite a few of the books and even several of the knockoff books. What I liked about the books is that it was just really fun trying to find Waldo hidden among all of the strange characters. The series was quite popular in the late 1980s to the early 2000s which lead to a bunch of tie-in merchandise including several board games. I am looking at one of those games today Where’s Waldo? Waldo Watcher Card Game. I didn’t really know what to think about the game as it looked like they basically turned the books into a basic card game mostly meant for children. Where’s Waldo? Waldo Watcher Card Game is a very basic find the hidden object game that feels like it was more of an attempt to cash in on the popularity of the character than making an actual enjoyable game.

Starting with the player to the left of the dealer each player will flip over one of their cards and place it face up on the table. All of the face up cards should be placed where they don’t overlap one another. The next player clockwise will then turn their next card face up. 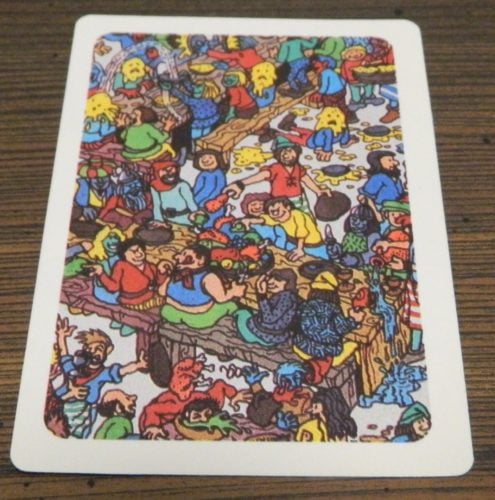 A card has been flipped over. Since Waldo is not pictured on the card the players should not play their I Found Waldo! cards.

Whenever a player spots Waldo on one of the face up cards they will lay their I Found Waldo! card on the table as quickly as possible. If multiple people play their cards at the same time the first player to play their card will get to identify Waldo first. 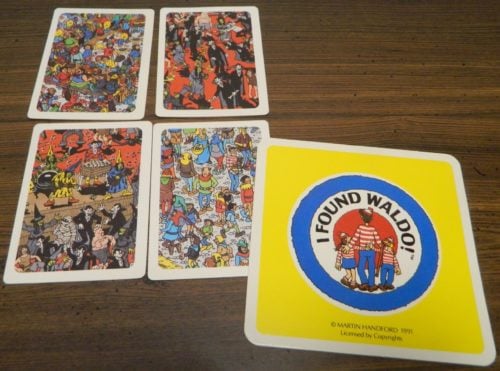 The yellow player has spotted Waldo in the bottom right card. They will play their I Found Waldo! card and point him out in order to score a point.

If a player incorrectly identifies Waldo they must sit out the next round as a penalty.

If they correctly identify Waldo they will get to cross off one of their letters from the score pad sheet. All of the face up cards are added to the discard pile. Each player takes back their I Found Waldo! card. The player to the left of the player who won the last round will start the next round by playing the first card. 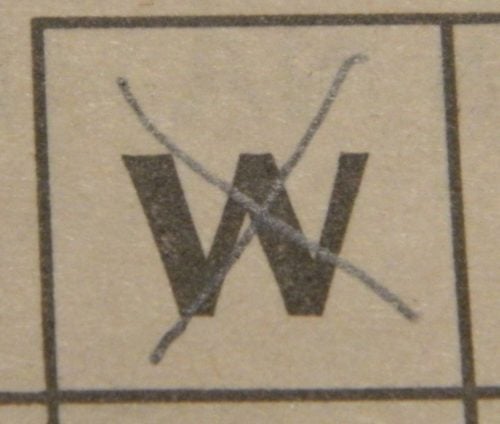 This player correctly found Waldo so they will cross off the W on their section of the scoresheet. 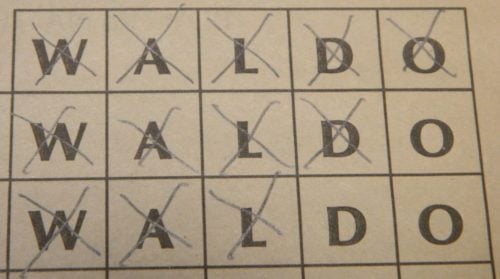 The top player has crossed off all of their letters so they have won the game.

At its core Where’s Waldo? Waldo Watcher Card Game is basically what I expected it to be. The game basically took nine of the most famous Where’s Waldo? pictures and cut them up into small sections. These sections were then placed onto the cards. Players take turns flipping over cards and trying to spot Waldo. The first player to spot Waldo scores a point and the first to score five points wins the game. That is basically all there is to the game. The game boils down to a very basic find the item game where players race to be the first to find Waldo. While I liked Where’s Waldo? when I was a kid I can’t say that I was a big fan of the game.

As Where’s Waldo? Waldo Watcher Card Game was clearly made for smaller children it shouldn’t be surprising that the game is pretty easy to play. Outside of the official rules being written pretty poorly, the game is simple enough that you should be able to teach it to most players within just a minute or two. If you know what Waldo looks like you just have to put down your card as soon as you spot him. That is all there is to the game. The simplicity is pretty obvious when you factor in that the game has a recommended age of 5+. The game’s simplicity also leads to it playing quite quickly. Unless you keep drawing the cards that don’t feature Waldo you could probably finish the game in about five minutes.

Due to its simplicity and its theme I think Where’s Waldo? Waldo Watcher Card Game could appeal to younger children. While the game has some issues which I will get to shortly, at its core the basic gameplay can be kind of fun. There is something satisfying about trying to find Waldo which is why the book series was so successful. Even if the game was mostly made for children, adults can have some fun finding Waldo. Adding in the speed mechanic of racing against the other players helps as well as you need to scan the pictures quickly so someone doesn’t spot him before you. Usually Waldo is pretty easy to spot, but I give the game some credit as it can deceive you at times. There are decoys on some of the cards that you might fall for as you are racing to play your card before the other players.

The main problem is that there is nothing unique about the Where’s Waldo? Waldo Watcher Card Game. There have been quite a few of these find the object games released over the years and it fails to do anything that really differentiates it from the other similar games. You are basically left with a very generic game that has been done many other times and in many cases better than Where’s Waldo? Waldo Watcher Card Game. As the gameplay is basically spot Waldo and play your card it can become repetitive pretty quickly. I could see younger children enjoying the game for quite a while, but it will become repetitive pretty quickly for adults. This isn’t helped by the game being quite easy for adults outside of the occasional misdirects since you will only make a mistake due to being rushed trying to beat the other players.

The other main problem with the game is that it feels like a cheap tie-in game trying to take advantage of the franchise’s popularity. The component quality is not very good. The card quality feels kind of thin where the cards will get creased through gameplay. The cards are also quite small where players have to sit really close to one another if all of the players want to have a chance to actually see all of the cards. The artwork is not bad, but it was taken directly from the books which is pointed out in the instructions. I didn’t expect the game to make totally new pictures, but it just feels kind of cheap to literally cut and paste the artwork from the books. At the very least they could have taken the book artwork and tweaked it to add some more misdirects. The other components are not much better. It just feels like the game was rushed into production with little effort put into making a good or unique game.

I have some conflicted feelings about Where’s Waldo? Waldo Watcher Card Game. There are some things that I liked about the game but there are issues as well. Basically the game takes the pictures from the books and turns them into a speed card game. The entire game revolves around players flipping over cards and trying to be the first to spot Waldo. This leads to the game being quite simple where basically anyone can play it. The game also plays quite quickly. Younger children will probably enjoy the game more than adults, but there is some fun in trying to find Waldo before the other players. The main problem with the game is that it isn’t all that original. If just feels like every other find the object game. This leads to the game becoming repetitive pretty quickly especially for adults as it is quite easy outside of the occasional misdirect. Where’s Waldo? Waldo Watcher Card Game also feels like a cheap tie-in to make a quick buck as the component quality feels cheap with the pictures just being cut from the pages of the books. Outside of the speed mechanic of competing against the other players you would probably be better off just looking at the books.

Where’s Waldo? Waldo Watcher Card Game is not a terrible game but it is not a good game either. If you are not a big fan of the find the object gameplay you will not like the game. If you have younger children or you really like the Where’s Waldo? franchise though you may have some fun with the game. Due to the game becoming repetitive pretty quickly though I would only recommend picking it up if you can get a very good deal on it.