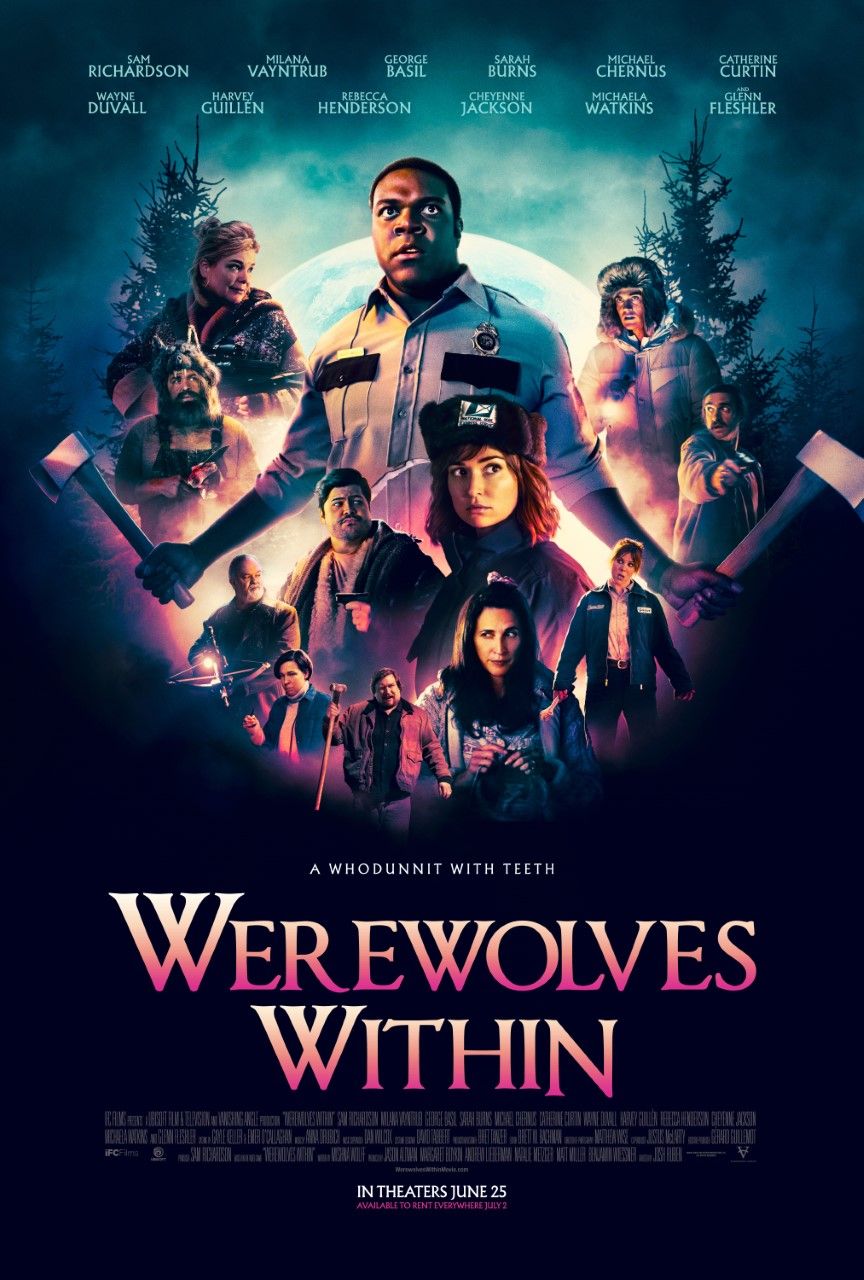 Released back in 2018 Werewolves Within was a VR video game released by Ubisoft. The basic premise of the social deduction game is that a group of players play as villagers in a town overrun with werewolves. While a majority of the players are peaceful villagers, a number of them are werewolves in disguise trying to deceive the other players into getting rid of the other innocent players. This game must have been successful for Ubisoft as it lead them to creating a film based on the game’s premise. While I have never played the game that the movie is based on, I was intrigued as it seemed like a mystery mixed with a comedic take on werewolves. Werewolves Within had a limited theatrical release last Friday, June 25th, and is coming to VOD this Friday, July 2nd. Werewolves Within is an interesting take on your typical mystery movie which has some issues, but is still an enjoyable movie.

Finn has recently been assigned as the new forest ranger for the small town of Beaverfield. Beaverfield may look like a peaceful little town, but things are not quite as they first appear. There are divisions in the town as a new oil pipeline has been proposed for the town. Some residents are in favor of the money that it will bring, while others don’t want to deal with the issues that it will bring with it. On top of that there is a creature that haunts the town and has lead to a number of disappearances in town recently. When one of the missing residents turns up dead, the town is put on edge. Making things worse is that a snowstorm comes to town blocking the roads and taking out the power. The residents are trapped as they start to figure out that one of their fellow neighbors may be the creature that has been haunting the town. Can the creature be caught before the whole town is killed?

In many ways Werewolves Within is a movie that is trying to do a lot of different things. The movie is trying to mix horror, comedy, and mystery elements together and not all of these elements work as well as they could have. Lets begin with the horror elements. I am not really a fan of horror movies so I personally didn’t have an issue with the fact that the movie isn’t particularly scary. There are a couple jump scares, but that is about it. This is coming from someone that doesn’t really watch much horror either. If you are looking for a scary film, Werewolves Within is not going to be it.

Along with the horror elements, I wouldn’t say that Werewolves Within is a particular funny movie either. Now the movie is not completely devoid of humor as I laughed a couple times. I can see the movie’s humor working more for others than it did for me. At times it felt like the movie was trying too hard where it thought it was funnier than it actually was. I actually think a lot of this comes down to the fact that the film was trying to do too much. Instead of picking the horror or comedy route, it only goes partway with both which leads to neither being as good as they could have been. I think the movie would have benefited from either choosing to go fully down the horror or comedy route instead of trying to be both at the same time.

At this point a lot of people might think that I didn’t really care for Werewolves Within. Despite the movie’s issues, I still enjoyed watching it. It is just disappointing that these issues keep the movie from being as good as it could have been. The movie actually has a really cool premise which wasn’t fully realized due to these issues.

While I have never played the video game that the movie is based on, I actually think the movie does a good job taking the premise behind a social deduction game and turning it into a movie. In a way the movie kind of feels like a mystery where instead of figuring out who is the criminal/murderer, you need to figure out who is the werewolf before they kill everyone. I found the mystery a little predictable as I guessed the ending pretty early on, but I still think the movie does a good job keeping you guessing throughout. While it makes the characters un-likeable, how the characters are developed gives each of the characters some motive. There were a couple characters that were obviously not the werewolf, but the movie does a good enough job making the rest suspicious enough that you never quite know who it is until the very end. Thus the film’s mystery was actually pretty good.

It is kind of a shame that the movie couldn’t have figured out what it wanted to be. The mystery element is quite good. It could have been a little less predictable, but it was still enjoyable trying to figure out who the werewolf was. In a way it feels like your typical mystery movie, but the werewolf twists keeps things interesting. I think it could have been even better though if the movie either fully embraced the horror or comedy elements. The movie could have been pretty scary if it wanted to as you would never truly know who was going to be attacked next. I could have seen a straight comedy working as well since it could have made fun of mystery movies as well as the typical werewolf tropes. I think the premise behind the movie is actually quite good where I would be interested in seeing what could be done with it.

We would like to thank IFC Films for the screener which was used to write this review.

Werewolves Within released on select theaters on June 25th, 2021 and will be releasing on Digital and VOD on July 2nd, 2021.

Recommended For: Those that are interested in a mystery where you try to figure out who is the hidden werewolf.