Board Games » Reviews » Family » Web of Gold Board Game Review 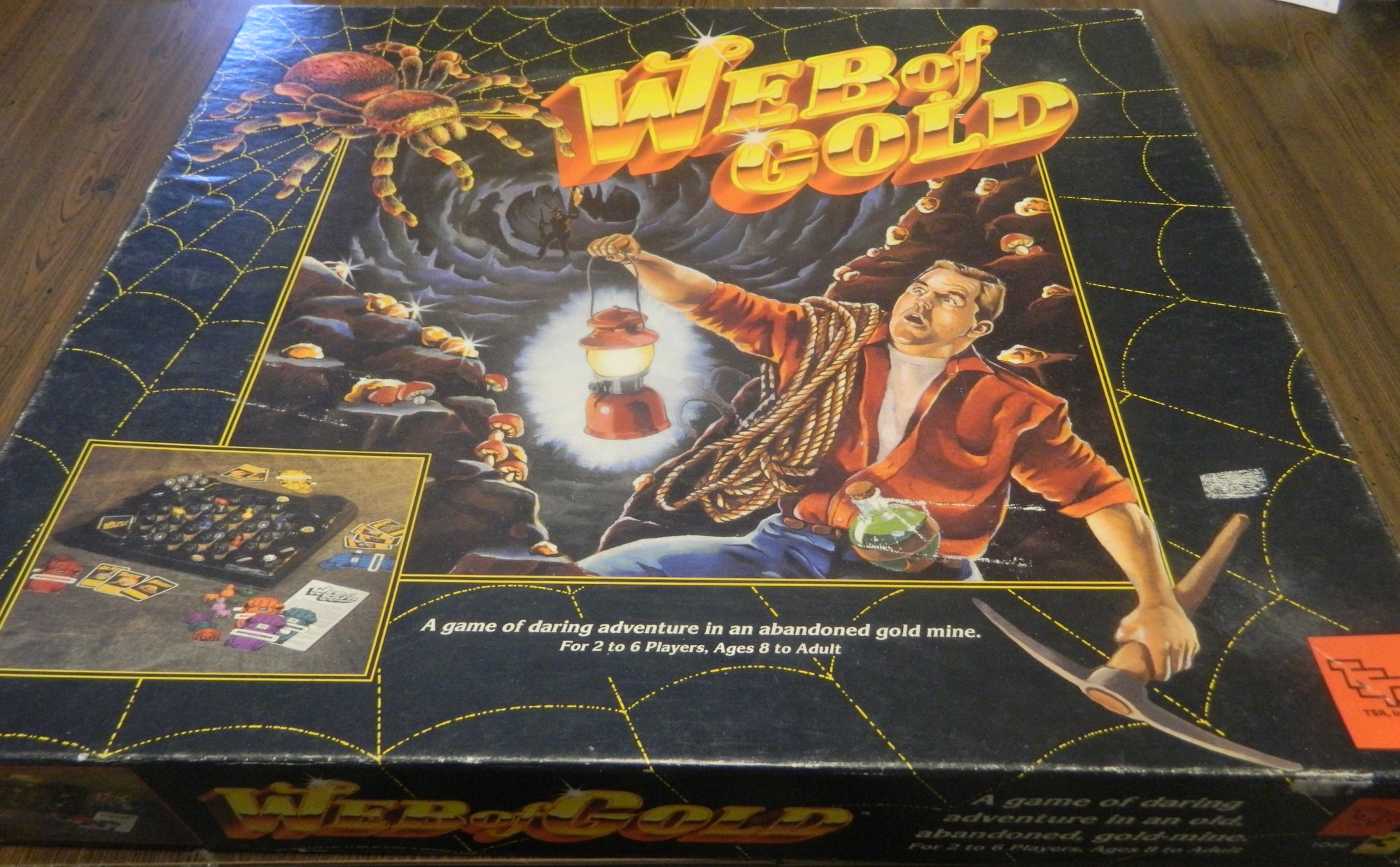 To set up the game, every player gets a lantern card which has a on/off marker, an oil level marker and spider bite marker attached to it. The spider bite marker is set to 0, the oil level marker is set to six, and the lantern is set to off. The player also takes the spider and adventurer of the same color as their lantern. All players place their adventurer on the board on the space that matches their color. Players then roll the die to determine who gets to place their spider on the board first. Spiders may be placed on any of the pillars but only one spider may occupy each pillar.

Each player’s turn consists of two phases. Each player will first use their adventurer and then their spider.

While moving, an adventurer may encounter a spider web. In order to proceed an adventurer needs to break the web. To break a web the player needs to announce which web they are trying to break. The player then rolls the die. The number rolled plus any bonuses from item cards or the lantern is subtracted from the number on the web. If the result is 0 or lower, the web is destroyed and the player moves to the space they were planning on moving to. If the result is above 0, the web piece is replaced with a web with a number equal to the result. The adventurer pawn is placed on the web to indicate that the adventurer is stuck in the web. The adventurer is unable to do anything until they break out of the web. The first thing they do on their next turn is roll the die again in order to try and break the rest of the web.

Searching for Items/Digging for Gold

Once a player has stopped moving they can attempt to find items or dig for gold.

If a player lands on a yellow space they are able to dig for gold. A player rolls the dice and adds any modifications from items or their lantern. If their total is larger than the number on the space they get to take a gold piece. If they roll a lower number they do not get a gold piece.

A player is only allowed to carry six items at any time. Your lantern and each piece of gold you are carrying count towards this total. If you have more than six items you need to discard an item. When an item is discarded or used, that item is removed from the game and cannot be used again. In order to free up space in your inventory, you can return to your base and drop off all of the gold pieces that you have on you.

Items available to adventurers include:

Before starting their turn a player needs to decide if they would like to turn their lantern on for their turn. If they choose to turn it on they must reduce the oil level by one. Once the lantern runs out the player is unable to use it unless they find an oil flask to refill it.

Using the lantern during a turn gives the following benefits:

Players can decide to discard their lantern at any time in order to open up an inventory slot. The player will not be able to get the lantern back though.

To spin a web the player picks a path between its’ current spot and one of the adjacent pillars. The spider adds three web strings to that path. If there were no webs on that space a three web piece is placed in the path. If there is already a web on the path, the web on the path is removed and a new web is added that is three higher than the previous web. If the total is greater than six, only a six web is placed since the webs can not be stronger than six.

You can win Web of Gold two different ways. If your adventurer is able to bring back six pieces of gold to their base, that player automatically wins. If all adventurers are bit four times and eliminated from the game, whichever player has collected the most spider bite markers (delivered the most killing blows) is the winner.

Looking at the box for Web of Gold, I was expecting much. The game looked cheesy and not very good. I have to say that I was very surprised by the game. Web of Gold is an underrated game and is one of the biggest board game surprises I have placed recently.

What I like about Web of Gold is that it does a good job blending strategy and simplicity. The game takes a little while to explain but players should pick up how to play the game pretty quickly. I would consider Web of Gold to be the perfect family game. The game is probably too difficult for young children but children at the recommended age of eight shouldn’t have much trouble with it. Web of Gold is a great family game since it is simple enough for children to understand while also having enough strategy to keep parents engaged.

To discuss the game further I think it would be best to break it down based on the two game phases.

The adventurer phase of the game is solid. At its most basic level, Web of Gold is a roll and move game. In general I hate roll and move games since they rarely have any strategy. You roll the die and move your pawn. In the adventurer phase, you don’t roll the die for movement since you get to pick whether you would like to move one or two spaces. Die rolling comes into play when trying to get items and gold.

To do well in the adventurer phase you need to make good decisions. You can’t get your adventurer trapped in webs since you will waste turns getting yourself out and you risk getting bit by spiders. While playing you need to decide whether you want to play cautiously or aggressively. If you play cautiously you are unlikely to get caught by spiders and trapped by webs. You also make it harder to get items and gold since the spaces on the outside require higher rolls than spaces on the inside. On the other hand you can play aggressive and move toward the center. It will be easier to get items and gold but you are much more likely to get trapped by webs and spiders.

During the game you need to manage your inventory since you can’t go over six items. If possible I would highly recommend trying to get a pickaxe and a grappling iron quickly since they will help you throughout the game. The +1 bonus they provide could be the difference between getting a piece of gold/getting through a web and failing. The pickaxe in particular is very helpful when it comes to digging for gold. When you reach the inventory size of six you need to start making tough decisions on whether you are going to ditch an item that will be helpful to you or ditch a piece of gold that you ultimately need to win the game.

Finally you need to make wise decisions with regards to your lantern. While you can technically discard your lantern to earn space in your inventory I would highly recommend against doing that unless you have run out of oil. The lantern is a very valuable inventory item. I wouldn’t recommend using the lantern unless you need to since it is a good idea to keep as much oil as you can as you try to race back to your base with the gold that you need to win the game. When you get enough gold to win the game and start heading back to your base, every player will use their spiders to try and slow you down. By having your lantern activated it is much easier to move around the board and through spider webs.

Even though the adventurer phase does have a lot more strategy in it than you would expect, it ultimately does come down to the luck of the roll. You could play the strategic elements as best as possible and still easily lose due to poor rolling. If you keep rolling low numbers while digging for gold and trying to get items you won’t get either and you have no chance at ultimately winning the game. Getting modifiers helps offset some of the luck of the roll but if you keep rolling ones and twos no modifications will be able to help you.

While the adventurer phase relies on the roll of the die, the spider phase only uses the die to attempt to bite another player. Luck does somewhat come into play though due to the ability of players being able to team up against one player. If one player gets a huge lead, the other players can all team up and work together in order to hinder the player that is ahead. They will try to put as many webs in your way as possible and they will try to bite you. You will pretty much be stalled in place for a while until some of the other players start catching up. At that point the players need to start attacking one another so they will back off.

When I played the game I played it with two other players. The game is playable with two to six players. While the game is playable with two or three players, I would highly recommend getting more players. The game is too “easy” with two or three people. What I mean by “easy” is that the spiders don’t seem to affect the game very much with fewer players. With so few players spider webs were not much of an issue early in the game. Players can easily just run around the webs since there are too many free spaces and not enough spiders to trap any players. In the early game the webs are somewhat of a nuisance but not much else. With more players I would guess that the webs would play a bigger roll since with more spiders there will be more webs on the board.

Overall the components in the game are good for the most part. The gameboard is made of a somewhat thick plastic and should be fine as long as the board is reasonably well taken care of. The spider and adventurer pieces are nice since they are pretty thick and have a moderate amount of detail to them.The cardboard web and gold pieces are a little thin which makes them prone to being bent.

Web of Gold is a surprisingly good game. It is not perfect but I would call it a good to great game. The game is pretty easy to learn while also having quite a bit of strategy behind it. While I would highly recommend playing with as many players as possible, the game still works with fewer players. If the concept of the game doesn’t appeal to you, you probably won’t like the game. If the concept intrigues you even a little though, I think you will enjoy Web of Gold.